What was this optical apparatus called? (It was used for showing pictures.)

What was this optical apparatus called?

This apparatus entered Iran about 120 years ago (in 1900) after the king of that time had a visit from an exhibition in France.

It was used for showing pictures (non-motion ones) and had some round outlets through which the observer could watch the pictures. Its intended use was entertaining, especially the kids.

When the kids heard the call of the apparatus-man, they ran happily towards him, circled around him and stood in line eagerly to watch the pictures after paying some small amount of money.

The pictures could be photos from European cities, famous actors and actresses, different animals, etc. While the observer was watching through the outlet, the apparatus-man explained each picture in an exciting manner and mesmerized the observer by his stories, so they wished they could visit those places some day in the future.

Later, other personal devices were invented like the "View-Master" which were somehow a modern version of that apparatus.

The device had two handles on its top and the showman could go to another pictures by turning/ twisting those handles. The pictures were different yet had the same theme (for example; there were all photos from different beautiful landscapes in Paris). The showman explained each picture and then went to another one. 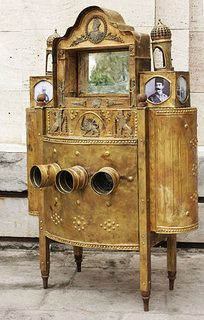 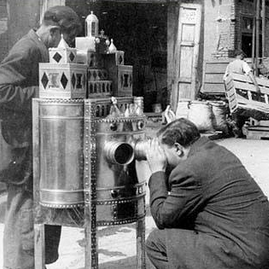 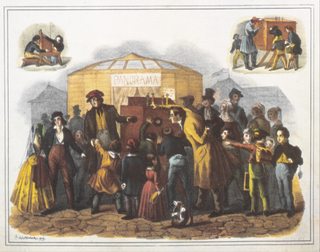 This is a drawing of the inside part of that device according to definitions I found in Persian websites. Sorry for my bad drawing. 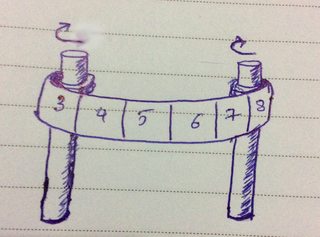 Wikipedia page, linked here, shows a list of images related to peep-show (also known as peep box, raree show, or Perspective View). All images (except the sketch) tagged in the question can be seen in this link.

So there's a high chance that people will take it to mean the second definition.

A peep show or peepshow is an exhibition of pictures, objects or people viewed through a small hole or magnifying glass. Though historically a peep show was a form of entertainment provided by wandering showmen, nowadays it more commonly refers to a presentation of a sex show or pornographic film which is viewed through a viewing slot.

Your linked first image is seen in the Wikipedia article I linked. It's captioned "Peep show in Golestan Palace"

It may also be called a raree-show, which doesn't come with the negative connotation usually.

In those days both "peep show" and "raree show" were used to mean the same device without it necessarily implying a porn-related meaning.

a small display or scene viewed in a box : peep show; broadly : an unusual or amazing show or spectacle

So, it was called "peepshow", but now it has a negative connotation, so better to call it "raree-show" now.

I might call it a praxinoscope, although the Farsi term seems to be shahr-e farang. In Hindi the word sandook is used.

From the description and historical timing, it would seem to be some kind of pre-film animation device - see Precursors of Film :: Modern Era on Wikipedia. Look at praxinoscope and zoetrope as well.

The praxinoscope represents a refinement on the zoetrope. The slits are replaced by a set of mirrors that spin in the center of the drum. (the animation book, Kit Laybourne, 1998)

The praxinoscope functions by using rotating mirrors to give the illusion of movement, and the shahr-e farang is an adaptation of that technique.

The praxinoscope is one of several different types of pre-film animation devices involving rotational drums or disks to give the illusion of motion. "Peep shows" and "magic lanterns" of various types predate this specific era, and you've specified that the apparatus came to the King from an exhibition in France, and the presence of the lenses indicates a newer invention; the discovery of the theory of persistence of vision/the thaumatrope in 1824 led to a number of rotational animation devices in the 1930s, including

"...in 1832 Joseph Plateau created the Anorthoscope and Phenakistiscope; in 1833 Simon Stampler developed the Stroboscope; in 1853, Franz von Uchatius invented the Kinetiscope [sic] which projected moving drawings; in 1861 Samuel Goodale patented a hand-turned stereoscope device which rapidly moves stereo images past a viewer;[8] and in the same year Coleman Sellers II built the Kinematoscope - a series of stereoscopic pictures on glass plates, linked together in a chain, and mounted in a box."

In common usage, I have heard zoetrope used to reference rotational animation devices in general, even though they don't all function the way a "true" zoetrope does.

This design project documented in the Cairo Observer seems to have the best description I can find of the way traditional shahr-e farang function, though therein and elsewhere they are referred to as alternately "peep boxes", "peep show boxes", and "sandook".

6
What is this piece of children's playground apparatus called?
1
What is it called when a snake is showing its head when angry?
8
A word for a person who is made a villain by their circumstances, not necessarily by their actions
8
What is the style of art in which small numbers are used to paint pictures called?
0
What is this device called?
1
What is this obsession called?
10
What's the word for someone who takes a conceited stance instead of their bosses in order to appear important?