Prefixes for the opposite of "perishable": unperishable, non-perishable, imperishable [closed]

Please include the research you've done, or consider if your question suits our English Language Learners site better. Questions that can be answered using commonly-available references are off-topic. 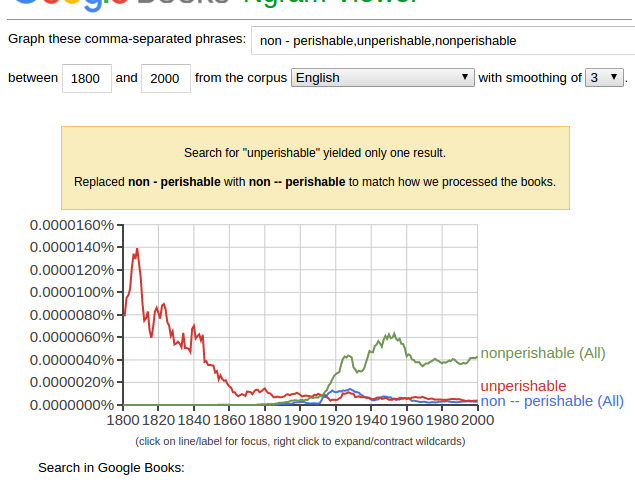 20
Is “Untap” an equivalent of “Unleash?”
15
How productive is the verb prefix "un-"?
14
Are there any patterns to observe in choosing the correct negative prefix to use?
1
Polysemous prefix 'un-'

27
Is there a reason to use "mono" over "uni"?
18
What does 'condescending' exactly mean?
6
Difference between "pangalactic" and "transgalactic"?
6
Difference between the terms 'famous' & 'infamous'; 'valuable' & 'invaluable'
8
"Inter-", "multi-", "cross-", "trans-" in relation to disciplines
3
Nonabelian or non-abelian?
2
The half-prefixes
2
Opposite saying/word for "have patience"?