I have a friend from the southern U.S. who uses the phrase “might could” quite often. He’ll say, for example:

When I first heard him say this, it made me do a double-take. I wasn’t sure whether it’s incorrect, or correct but just not idiomatic outside the southern U.S.

This is a construction that is restricted to certain dialects of US English. In Standard English, it is not grammatical. (This construction is also often stigmatized, which means you would want to be especially careful before using it — you could be judged!)

However, this construction is used systematically in certain dialects of American English. To describe it clearly, I want to define a few linguistic terms I will use to sort out a crucial three-way distinction:

People who use this "might could" construction are not making a speech error — within this dialect, it is grammatical. Informally, this is used throughout the southern US, but has not spread to any other region I am aware of. Interestingly, it so happens that the same construction is standard in German.

A description of how this works:

What is going on in "might could" constructions is a process called "modal stacking", where multiple modal verbs (e.g. "could", "should", "might", "would", etc.) can be stacked on top of each other. Each added modal verb contributes towards the overall meaning of the sentence. In Standard English, to convey the same meaning, we have to use another construction:

We are doing effectively the same thing in standard English in terms of semantics, it's just that we have to change things around to get around a syntactic restriction.

Modal stacking is not sloppy, meaningless, or redundant; linguistically, it is a systematic process (which I think is really cool!). It is just non-standard in English — something one would avoid using outside of this particular dialect group, especially because (like many features of Southern English) it carries a certain stigma outside of where it is used. But within that group, it is a productive and useful construction.

(This answer has been edited to clarify my use of "grammaticality".)

I wasn't sure, though, if its incorrect or correct but just not idiomatic outside the southern US.

This construction would be considered incorrect (a grammatical mistake) in most varieties of English.

Although double modals are not “standard” written English outside of “dialect” writing, they are common enough, particularly in the north of Britain and in some parts of North America. Perhaps the best reference is the chapter on “The English double modals” in Linguistic Change Under Contact Conditions (ed. Jacek Fisiak; Mouton De Gruyter, August 1995), where on page 209 it reads in part:

The historical home of the current “double modals” would appear to be in Scotland and Scot English (Montgomery 1989) since Scots speakers settled in great number in northern Ireland in the seventeenth and eighteenth centuries, and later generations migrated from there to the American south. [...] The double modals [that] have begun to emerge from the dialect literature in the last decade or so have begun to receive some attention by investigators working in the programmatic frameworks that they apparently threaten.

There is a great deal more of interest to the topic immediately following that. It’s interesting that they remark above that the usage has begun to emerge “from the dialect literature”, presumably into the main stream of standard writing. This Google n-gram shows that “might could” in particular is growing:

Note that I have not accounted for any noun uses of might in the n-gram above, such as “political might could” or “military might should”. Googling The Economist or the New York Times for double modals turns up plenty of false positives of that particular sort, so the previous n-gram alone should not be taken as actual proof of anything. It is perfectly possible that (say for example) “military might” is simply becoming a more common topic of discussion, so further work would be needed to winnow out any actual evidence from such results.

Another source attesting to the use of double modals in Modern Scots is A.J. Aitken in The Oxford Companion to the English Language (Oxford University Press 1992. p.896).

Finally, this source argues that this is not an “illiterate” use:

The use of the double modal is definitely not "illiterate," but rather typical of regional dialect. It just happens to be largely, if not exclusively, confined to spoken language or reported speech, which says more about the intolerance of dialectal forms in "standard" written English than it does about the education level of the speaker. It's generally true that more educated Southerners tend to avoid this construction, but that's due to a prejudice of perception, not to any inherent inferiority of the use.

In fact, I doubt whether the most common double modals, "might need to" and "might've used to," would clang in most English speakers' ears. However, this dialectal use is indeed mostly concentrated in the South and South Midland, according to the Dictionary of American Regional English, which also gives the following complete list of actually occurring forms, which I think is surprisingly varied:

The use of most double modals is fading in the more northern reaches of its original range, which used to extend as far as the Pennsylvania German community. Most commonly, the may/might element takes the place of the adverb probably; in other cases, it's the can/could element that is substituted for be able to. Actually, many of the forms cited in DARE are not double modals, but examples of the way that might is being directly substituted for "probably," such as "might better" (you probably [had] better) and "might supposed to" (you are probably supposed to).

Double modals are quite common in Northern English (that's England English) and Scots. The settlement patterns of people of Scottish ancestry in the southern U.S. might would account for the concentration of the usage there.

In summary, I don’t think one can answer the question of whether might could is a “correct” construction. All we can say is that some speakers consider it grammatical, and others do not.

Personally, I myself would avoid it in formal prose or formal speech, because I do not perceive it to be part of the higher registers of spoken or written English. Nevertheless, it is perfectly common (and therefore grammatical) for many speakers on both sides of the Atlantic, and I would not hesitate to use a double modal in casual and colloquial registers. I rather like the construct, to be honest; it has a certain parsimony of phrasing that I appreciate, and it imparts a certain folksy tone to one’s words that may (or may not) come in handy.

It also seems to be on the increase. I’m not one to speculate why this might be, but the initial reference work I gave [Fisiak 1995] would seem to be the place to go to delve more deeply into that sort of question, perhaps with supporting evidence from DARE.

Harvard's Dialect Survey had the question,

Here's the geographic distribution of their results from 10,739 American respondents: 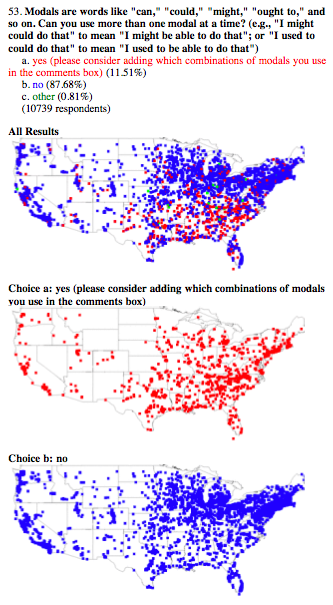 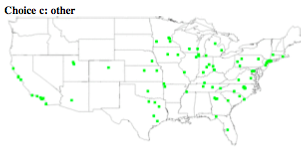 No, it is not a valid grammatical construction, but it is (as I understand) fairly common in the Southern US. The reason for this is because both are verbs, and unless one of them is a linking verb, you cannot have two verbs next to each other. In addition, the usage is redundant:

Could - Used to show the possibility that something might happen.
Might - Used to indicate conditional or possible actions.

It would be like trying to say "the cat feline" or "he ate consumed food".

Regrettably, I must disagree with Kosmonaut's response. Although I accept that it is used in several(?) dialects of English, that does not make it a "correct construction" in English in general. Considering that the question referred to English as a whole, I must maintain that because it is not considered valid in most regions, then we cannot put forward that it is a valid construction. Furthermore, (and as a side note), I fail to see how it being valid in German has any bearing on the subject. For example, in Latin, the phrase "Ad Roma aquam portat." is perfectly valid, but to say "To Rome the water he carries" is awkward at best.

Not the answer you're looking for? Browse other questions tagged dialects modal-verbs grammaticality or ask your own question.

1
"That might even could happen" be considered incorrect?
1
Might would? if i could?
0
Does using the words "might" and "could" consecutively in same sentence have a name or is it just improper English? (spoken English)
1
"He might could come Friday" - Can anyone use two modals for the same verb (and get away with it)?
-1
Is “You might could talk to her family” grammatically correct?
55
Why can't the word "can" be used in future tense (will can)?
1
Can I drop 'might' in this sentence without changes in meaning?
2
Is "you best should run" correct English?

8
Substituting "do" after modals
22
"Can hardly wait" versus "can't hardly wait"
16
When quoting a speaker of another English dialect, should you spell things his way?
4
could versus be able
5
Origin of "I seen" construct?
36
Regional dialect or just improper grammar? Eating on leftovers or just eating leftovers
4
What is the structure of “might did”?
1
How to negate the double modal construction "might could" (and others)?