My grandmother was born in the village of Lilley, Hertfordshire in the 1870s. She had two expressions which I have never heard anyone else use. When frustrated in place of a swear word she would say, "oh dear Shakespeare let's have a little drop of beer." When something was missing her expression was, "it's gone a gilby hunting." Has anyone heard these expressions and if so do they know their origins? Thanks for your help.

The phrase gilbey hunting probably makes reference to an ad campaign for Gilbey's Spey-Royal Whisky, which features the tag line "Worth hunting for". 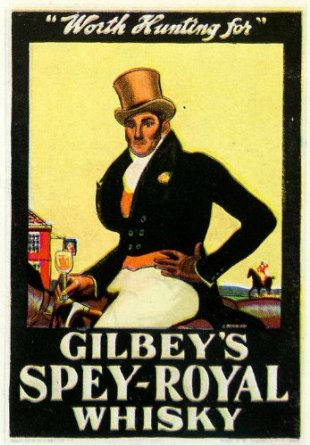 The company started in London around 1857 (here) and have many similar ads, as evinced by this google image search.

The phrase gone a Gilbey hunting thus means to be out searching for drink. Your grandmother probably humorously extended it for all situations where something was missing.

Also note that the "a Gilbey" construction is found elsewhere in slang with presumably the same origin, as evinced here under the entry "hard-a-Gilbert/hard-a-Gilbey".