Usage of "the cubalow" - Has anyone heard the phrase?

When I was a child in the 1950s I remember my mother calling the domestic hot water tank 'the cubalow', sounding like 'queuebelow'. Has anyone else heard this word being used?

I found several instances of this word being used, but always as a small structure that is part of a building, not a hot water tank. Do you think that's possible?

The Yorkshire Post has an article about a Yorkshire dialect dictionary, and the author of the dictionary says this: " "In terms of accent, Tykes may all share some similarities, but the words are often peculiar to specific area. I had one woman write to me suggesting the word 'cubalow', it's a lovely word for a low cupboard in the kitchen and she thought it might have had it roots in cubby hole. I couldn't find anyone else who used it, and she did admit that it may have been specific to her own house. I love the thought of families making up their own language." He retells the same story for the BBC.

On Facebook, a US company that makes metal buildings shows a picture of a barn they made with a "3x3 [foot] cubalow".

A website that gathers information important to Ontario, Canada, tells a story about fire towers that have cubalows: "After the big fires the government contracted wooden fire towers to be built on the higher areas." " The first lookout on Green’s Mountain was a one storey shack with a 7’ square windowed cubalow (i.e., cupola) for a 2nd storey.

In 1821, a town in northeastern United States added a porch to their meeting-house instead of a cubalow.

You can find these articles by googling "cubalow" -cuba (that is, your word inside double-quote marks, and then a minus sign next to the word 'cuba').

The Scholar’s Companion has a lovely list of ‘Improprieties Heard in Conversation’, which includes

This afterword to a poetry book gives

Cupelo – cupola, a furnace
and This French book about… stuff, seems to back up the ‘furnace’ association and also gives a spelling of ‘cubilot’ which I can imagine giving rise to the ‘cubilow/cubalow’ spelling of the OP.

Interglot gives 'cupola furnace' as the direct translation from the French of 'cubilot'and Google Translate confirms a pronunciation of approximately 'queue-below'.

My speculation therefore is this:

So the next question is: what foundry industries in Yorkshire (or Shetland) might have been using the French word for cupola furnace?

or... (Once you get googling on a subject you find all sorts) it is just straightforward French usage for the fire box used to heat water. I found this image 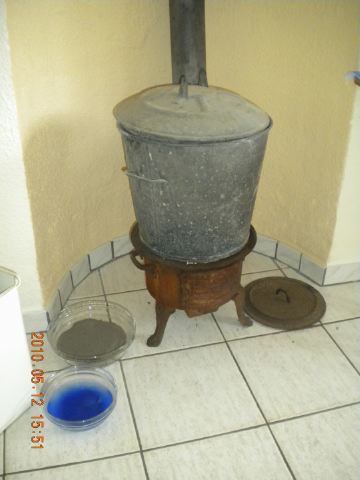 The website this comes from appears to be about the history of a laundry.

So the real questions appears to be, how did Yorkshire women come to be using French laundry terms?

My mother, from Hull, East Yorkshire, always referred to the cupboard housing the hot water cylinder as the 'cubelow', pronounced queue-below. She didn't know why and couldn't spell it either.

My mother also used the word cubalow when talking about the ' airing cupboard' which is where the hot water cylinder was housed. We also lived in East Yorkshire in a village near Hull. I was a child in the 1940s.

Researching the term threw up the same answers as previous. One other reference not yet alluded to is to be found at Page 3 Advertisements Column 4,Auckland Star, Volume XXXVIII, Issue 196 August 17th 1907. The advertisement is aimed at Blacksmiths and is selling sundry items including 'cabalow'. No description is given more than this. https://beta.paperspast.natlib.govt.nz/newspapers/AS19070817.2.15.4

Both were from Kingston-upon-Hull so I guess its origin is in East Yorkshire as others have indicated.

My mother used this for the airing cupoard/hot water tank - I was born in 1970's . "Cubelow" was supposed spelling. East Yorkshire, Beverley near Hull. My parents didn't use much local vernacular, I thought this word was something she'd got from her Scandinavian heritage, but obviously not!

0
Origin and usage of the phrase "my son"
4
Origin of the phrase "tell me when"
7
"Piece" as a verb, meaning to snack?
2
Passivity as a passive activity?
5
What does 'tickling the baby with the meat axe' mean?
5
Fictional usage of "drone" to mean "worker" in the context of a eusocial species
1
"Bad friends" colloquialism
2
How is Dickens using 'as' in ' ... he didn’t know **as** anybody could say how it was ...'?