What does "dangling off turrets" mean here?

It takes me a while trying to understand "dangling off" as well as "turrets" in the following context, have looked up all the meanings of turret in dictionary but none makes any sense here in the context:

the context has been edited and here I have given all about bees in this book...as the "to dangling off turrets waving butterfly nets" part is just after a DASH, doesn't this mean it's still talking about how to get rid of bees? I was supposing that they were waving butterfly nets to avoid bees...thus was stuck by "dangling off turrets"....now maybe they are just the description of other images..?

ŌĆśWe were in the most amazing abandoned palace with giant rooms shaken by the huge earthquake four years previouslyŌĆÖ, recalls Lily, ŌĆśit had never been restored and so existed eerily like some large film-set or a haunted house Disneyland attraction. What an adventure those ten days in India were: from getting locked into rooms to avoid the thousands of stinging bees that swarmed at midday ŌĆō it was each for himself fighting for hats, skirts and so on to hide under ŌĆō to dangling off turrets waving butterfly nets ...ŌĆÖ

Ragi Dholakia:ŌĆśOne particularly hot March whilst shooting in a 13th century palace I noticed a few hornets in the courtyard outside. As the morning progressed it got worse and soon the teamŌĆÖs way in and out was buzzing with hundreds of giant hornets. Members of the crew started to be stung. We shut the doors and windows in the hope the swarm would disperse. It didnŌĆÖt. After being trapped in the room for an hour the angry insects started to infiltrate the room. We resorted to lighting newspaper to smoke towels which covered our heads and making a speedy dash for it.ŌĆÖ

From Pictures by Tim Walker

It is easy to imagine someone leaning precariously from a turret with a butterfly net to try to capture some wayward lepidopteran. One might lean far enough out to exaggeratingly refer to it as "dangling". Here's the turret in my imagination. Think of leaning out from one of the castellations for this purpose: 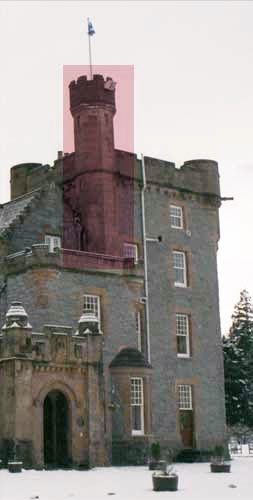