Word for a word that changes spelling but not meaning?

What is the word that describes a word that has changed in spelling but not meaning, such as how the word "to-day" was once spelt "today"?

The single word for this is variant. More completely variant spelling.

A different spelling for a single word. Typically a US vs. UK or US vs. Commonwealth distinction.

For example, color and colour are the same word spelt in the American and British styles respectively. You'd think there'd be a word for this that fits into this system:

Use the noun homograph to talk about two words that are spelled the same but have different meanings and are pronounced differently — like "sow," meaning female pig, and "sow," to plant seeds. Continue reading...

A homonym is a word that is said or spelled the same way as another word but has a different meaning. "Write” and “right” is a good example of a pair of homonyms. Continue reading...

A homophone is a word that sounds the same as another word but has a different meaning and/or spelling. “Flower” and “flour” are homophones because they are pronounced the same but you certainly can’t bake a cake using daffodils.

The hetero prefix is the counterpoint to homo prefix used here. Hetero means different where homo means the same. So one might imagine hetrograph is the word you want. However:

Heterographs are words that sound the same as other words, but they have different spellings and different meanings. For the English language learner or for young students, these words can be very confusing.

So heterograph doesn't work if you want this exact meaning. There is a very similar question on linguistics that illustrates the distinctions with a Venn diagram. 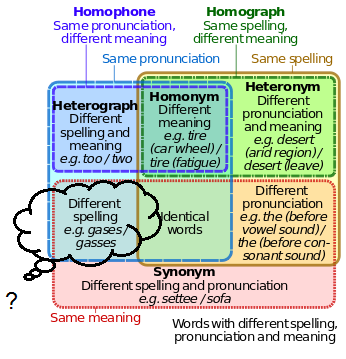 This originally comes from the wikipedia article on Homonym's which has a very easy to read table: 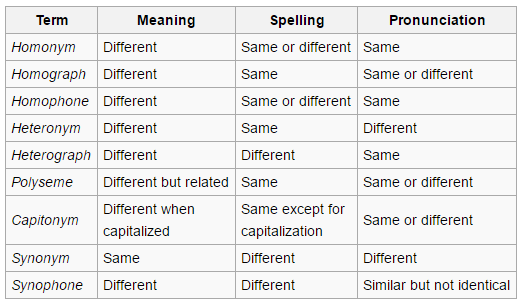 that is clearly missing your meaning:

3
What is the term for a word with two quite different spellings that are pronounced alike?

6
Terminology for pairs of words with the same meaning, similar or same pronunciation but different spelling
6
What are words similar in spelling but differing in meaning called?
3
What is the term for a word with two quite different spellings that are pronounced alike?
2
Is there a word for people who deliberately disregard standard spelling?
17
Was Zink ever valid spelling for Zinc?
2
Term for alternative spelling, which is not incorrect, but very sparsely used
1
If I want to use "bountying" in a sentence, how might I construct a spelling for it? If not possible, what word could be used instead?