What is the difference between "emoji" and "emoticon"?

I have seen these two words used to describe :) or 😀.

Are they different in any way? How could I tell when to use one or another?

What Seems Simple is Complicated

This is a rather messy matter, particularly regarding what words to use to mark which distinction. The Encyclopedia Brittanica news article What’s the Difference Between Emoji and Emoticons? by Cydney Grannan would propose that emoticons represent component punctuation, whereas various visual depictions meant to represent them are emoji. The distinction is rather strictly delimited. This makes relatively little sense with my prior experience, speaking of which, I should probably disclose that to put a perspective on the extent of it:

You can see that I have been a member of the internet since at least 2004 with my earliest account on record being on the Caves of Narshe, which is a Final Fantasy fansite. This is my profile there. I actually got internet access about a year or two earlier (I can't place exact dates), but 2004 is about the time I started interacting with others. I have a hotmail email address, which I regularly used to access the Microsoft Network instant messanger (Fomerly known as MSN). Two of my favorite interests were japanese animation, and video games. I mostly just lurked around anime communities.

You can not get hotmail addresses anymore, ever since Microsoft rebranded to outlook. You can not use MSN messanger anymore, now that Microsoft bought and replaced it with Skype.

The way I actually saw the word emoticon being used was quite the opposite to what the Brittanica espouses. It was usually in reference to the visual depictions of the text, with perhaps a little bit of leeway for also referring to the text. This is how it always was on the Invision Power Boards software which still power the Caves of Narshe website, although parts of the interface have also referred to them as smileys. Invision Power Board 2: By David Mytton (©2005) A User Guide demonstrates this, more or less:

Next to the New Post Page, there is a list of emoticons the user can add. You can alter the number of smilies shown per row. Defaulted to three, you can cange this to whatever value you wish:

Similarly, emoticon is also how Microsoft Messanger referred to the icons in its interface.

This is especially so on some formerly popular instant messaging services. Evidence supporting my claim can be seen in the article EZ Interaction by Jay Munro, which briefly addresses the subject of using emoticons and common abbreviations on the web circa 2003. I would like to highlight a couple of excepts and a screenshot:

Emoticons (emotional icons), those little smiley faces made from punctuation, are widely widespread. The origin of the smiley has been credited to Scott E. Fahlman, a research professor in computer science at Carnegie Mellon University (www-2.cs.cmu.edu/-sef/sefSmiley.htm). On september 19, 1982, Fahlman and his colleagues were discussing how to differentiate joke posts from serious ones on the university BBS, when he suggested the use of the simple :-) as a solution. With that, the smiley face was born, and the rest is history.

Recognizing the popularity of emoticons AOL, MSN, and Yahoo! offer graphical icons that replace the text versions. The old yellow "Have a Nice Day" smiley face from the 1970s got a makeover with dozens of icons to choose from—especially on MSN. And you don't even have to remember arcane key combinations anymore, as all IM clients now offer poop-up smiley menus (though Yahoo! includes tantalizing "secret" unlisted icons available only through key combinations such as a cow 3:-o, pumpkin (--), or waving U.S. flag. **==). 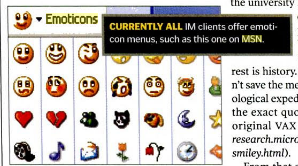 As of this writing can still download MSN Messenger 7.5.0322 for Windows , which was published in 2005, directly from Microsoft though, and that is of some utility to us. This is not actually the version I used, because I had a Macintosh, but its close enough for our purposes. Unfortunately, most functionality is locked out before you sign in, but with enough digging I was able to access at least this part of the interface:

So why is MSN important? Well, by 2009, which was the height of its popularity it had 330 million active users worldwide. This is comparable to the total U.S. population now, and although surely not all of those are English speakers, there's a considerable margin before we hit the next runner up in overall population: The U.K., which stands at 65.64 million. Surely many people must have learend to recognize these icons as emoticons, at least by way of metonymy and that is just on one service.

So far, it seems like emoticons can either be :-) or a picture representing it.

So I mentioned an interest in anime. Why is that important?

It seems probable to me, that the entry point from Japanese to English for the word Emoji is based upon anime subculture. You see, one of the most popular websites on the English speaking side of the internet is 4chan: It is the 74th most popular website in the U.S., and the 208th most popular website in the word and as such it had much influence upon the development of internet slang since it was founded in 2003. I was never a very active member of the community, but it had japanese centric roots, being inspired by the japanese 2ch imageboard. You can verify these facts and read some of the details on the website in A Beginner's Guide to 4chan, which was written by Fernando Alfonso III for The Daily Dot.

I would browse it from time to time as it was, for a while, perhaps the best way to see anime related art in an English speaking venue. I would prefer to cite a corpus of early 4chan posts for instances of the word emoji, but no such thing exists because 4chan aggressively purges its content on a close to real time basis. All I can say is that my earliest experiences of seeing the word emoji are probably from there.

However, the 2ch lead links us to a very interesting blog article that details the history of "Japanese Emoticons", which was written by Nekoguchi and published on October 24th, 2007. It details the history of a very specific kind of emoticon used on 2ch. Unlike what you are used to seeing in English speaking culture, these emoticons are oriented upright and can be much more expressive than English emoticons because they use a number of Shift JIS characters, in addition to whatever is provided on a standard Ascii keyboard. Nekoguchi reported that he first encountered these in 2002 while playing the M.M.O.R.P.G. Final Fantasy IX, when he learned that these were called either Emoji (picture characters), or Kaomoji (face characters). His dates are backed up with a link to a japanese website called Emojio which was updated between 2002–2003, which offered a variety of emoji to download.

This is a rather distinct styling from western style emoticons, so having word in reference to these is useful. Japanese anime subculture which often uses japanese loanwords to describe cultural concepts in a manner that is specifically anime related or otherwise japanese, even though the word itself originally served a more general purpose, in part because we have our own words for the more general concepts already.

Nekoguchi's account is significant because otherwise, it seems as if especially usages of the word in English only come up later. Apple introduced what they called emoji in 2008 (hypothetically in response to the anime fandom), the Emoji Dick kickstarter which translated Moby Dick into emoticons popped up in 2009, and the Unicode consortium introduced the emoji block in 2010 with Unicode 6.0. Thus Nekoguchi's account represents a period of at least one, and probably up to half a dozen years worth of prior usage, that has not even entirely come to pass even a decade not too long ago.

Speaking of Unicode, I would like to take this example from the Unicode F.A.Q:

So at least, on the one hand, excluding images

Are emoji the same thing as emoticons?

A: Not exactly. Emoticons (from “emotion” plus “icon”) are specifically intended to depict facial expression or body posture as a way of conveying emotion or attitude in e-mail and text messages. They originated as ASCII character combinations such as :-) to indicate a smile—and by extension, a joke—and :-( to indicate a frown. In East Asia, a number of more elaborate sequences have been developed, such as (")(-_-)(") showing an upset face with hands raised. Over time, many systems began replacing such sequences with images, and also began providing ways to input emoticon images directly, such as a menu or palette. The emoji sets used by Japanese cell phone carriers contain a large number of characters for emoticon images, along with many other non-emoticon emoji. Are emoji the same thing as emoticons?

Do take note of the example: (")(-_-)("). It is the same sort of emoji found on emojio, the same sort that Nekoguchi mentioned. Worth further note is that unicode has an emoticon block which is a subset of the emoji block, that specifically relates to the facial emoji.

Probably worth note is that Nekoguchi is not the only person to have known the japanese style emoticons as Emoji, even after all of that: On April 23rd 2012, the Emoji Master Post was made on the Super Kawaii Emoticon tumblr. I hand counted about 43 likes on the earliest archival version of the post on the Internet Archive, from July 11th 2012. This post serves a similar purpose to the emojio website, and in addition to the emoji from emojio, it also has an open faced style like this:

The two terms originate from different languages, sound similar, and have some overlap in meaning.

Emoticon comes from English: Emotion + Icon
It refers to any textual representation of an emotion. The original usage strictly referred to "smileys" such as :) or :(, but now includes unique characters that are specifically designed for the purpose of expressing an emotion such as 😃 or 😣

Emoji comes from Japanese: e (絵, "picture") + moji (文字, "character")
It refers to a visual representation of any object or concept (including emotions). 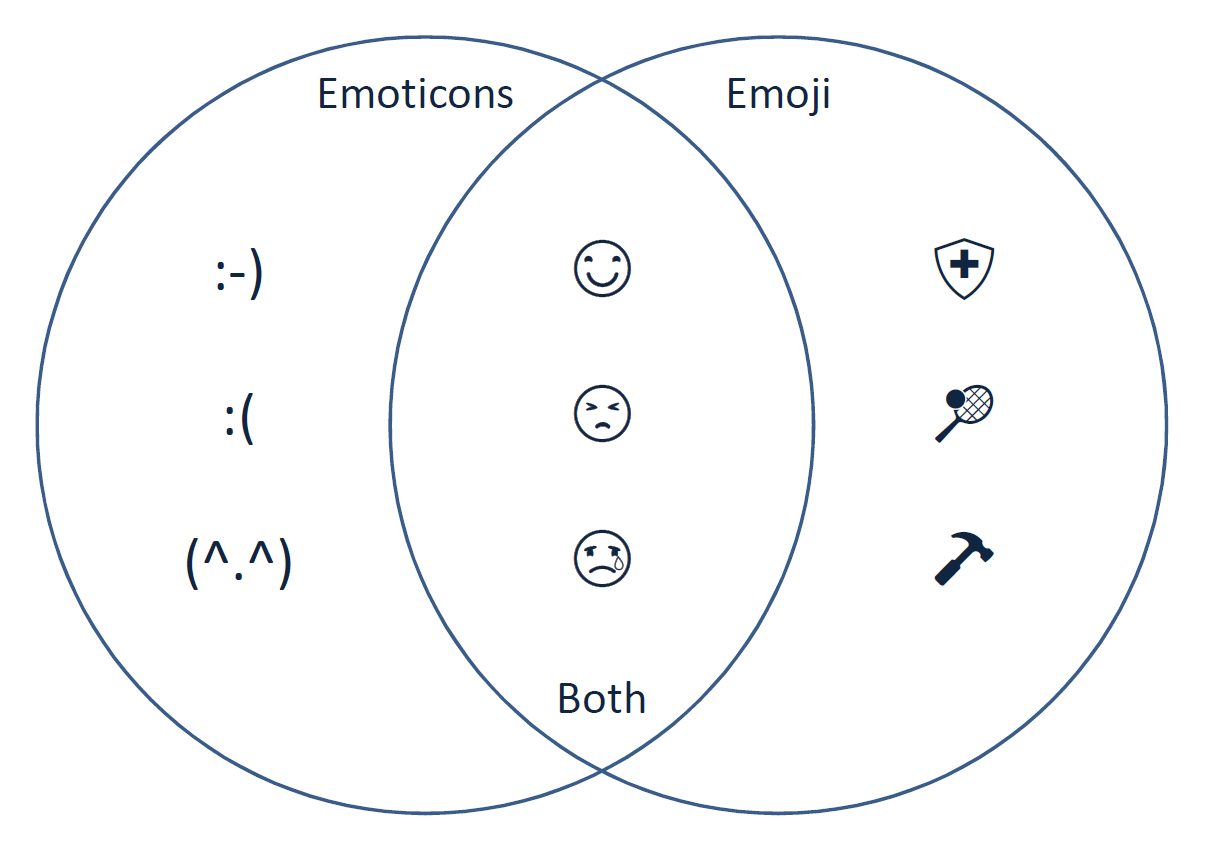 I don’t know exactly what “emoji” connotes in English, but I know it’s a Japanese origin word which means “pictorial characters.”

According to Wikipedia, Emoji is a method of symbolic presentation of a “thing” and “affairs” by using a picture instead of characters. Not only popular facial emojis such as 😀😁😂, 👿 (devil), 👹 (ogre), 👺(Tengu – mountain devil),👽(alien) listed in Unicode 10.0, Emojis are also referred to ancient pictorial characters such as Rongorongo characters discovered in Easter Island in 19 century and Maya’s symbolic characters.

Here are some samples of Emoji I picked up from iOS, an Emoji application for i-phone.

On top of this, you can make access to 399 sheets of Emoji collection on Emoji keyboard, each of which includes 40 different “characters.”

Some of Emoji relay Emotion, but they are different creature and words by its origin, meaning and usage.