Meaning of “Immorality” in the 1886 cartoon “The Mongolian Octopus” 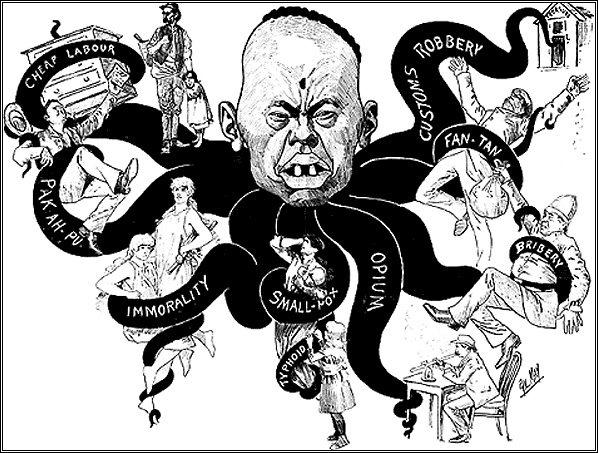 The cartoon The Mongolian Octopus: His Grip on Australia from 1886 (presumably referring to Chinese or Asian people, not Mongolians in particular) has "Immorality" as one of the tentacles.

In the context of this cartoon, what did "Immorality" mean? It seems a fairly vague term. As the two people ensnared are women, does it mean some sort of sexual immorality? Prostitution? Inter-racial relationships? Something else?

There appears to be a lot of information about the "Mongolian octopus" cartoon online. At first, I thought it was a reference to the West's long exploitation of the Orient. (The British are associated with China's opium trade, for example.)

However, the article The Mongolian Octopus states "The 'Mongolian Octopus,' first published in the Bulletin in 1886, was a octopus with eight tentacles pointing out bad things about Asian immigrants as bad people that would only strangle the innocent lives of white Australians." In other words, it's just another racist anti-immigrant cartoon.

This particular article doesn't specify the meaning of "immorality," but the two white women suggests the fear that Asian immigrants might prey on women sexually.

Not the answer you're looking for? Browse other questions tagged meaning-in-context euphemisms or ask your own question.