What comes after “octuplet”?

After singletons, twins, triplets, quadruplets, quintuplets, sextuplets, septuplets, and octuplets, what comes next?

We don't often need it, but the word is nonuplet.

Next after that comes decuplets, who according to the Guinness Book of World Records were born at Bacacay, Brazil on April 22, 1946. (I must admit I'm somewhat sceptical).

It's hard to be dogmatic about the spelling of a word that probably doesn't make it into many (if any) 'authoritative' dictionaries, but I will just say that - Wikipedia notwithstanding - I don't have much time for decaplets. Here's an NGram showing that not many others do either (in fact, there are 5 instances of decaplet in the NGram corpus, as opposed to 2450 decuplets).

Next is nonuplets followed by decuplets. I'm pretty sure there are no recorded decuplet births, let alone greater.

Update: After further investigation, I came across this image on Wikimedia Commons: 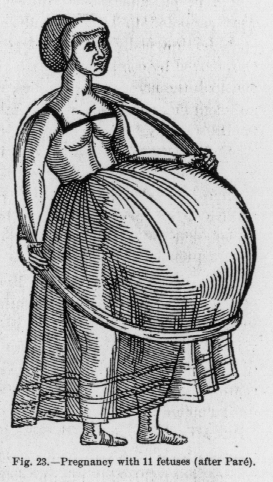 "Pregnancy with 11 fetuses (after Paré)." Giovanni Pico della Mirandola (1463-1494) reported the case of an Italian woman, Dorothea, who allegedly gave birth to undecaplets after having given birth to nonuplets. This illustration is a copy of an original by Ambroise Paré from the 1900 edition of Anomalies and Curiosities of Medicine by George M. Gould and Walter L. Pyle.

3
What is the polite way to acknowledge a pregnant lady after a long hiatus?
2
Single term to include children from multiple births

6
Which comes first: cat or dog?
4
What is a less ambiguous word for “confuse” in context of describing two similar things?
3
Is there a word for human litter-mates?
12
Word for “item after next”
9
Word for relationships between triplets
2
What is a sibling that comes long after all the other siblings called?
1
A better alternative for “second next”