The OP describes exhaustive and mutually exclusive cases, with two options or outcomes. In statistics, this segmentation of the possible outcomes in a finite number of choices is often called a categorical variable. When the variable only takes two values, it is generally termed:

Binary and dichotomous are sometimes considered synonyms. They both contains the root 2 (di- or bi-). For some, binary variables form a sub-species of dichotomous variables, whose values are assigned either a 0 or 1 label or binary state. The suffix -tomy ("to cut", like in atom, with privative "a-", which cannot be cut) in dichotomy seems more precise than the concept of arity, that denotes two objects or operands ("binary stars", "binary operation"), without clear reference to the mutual exclusion. 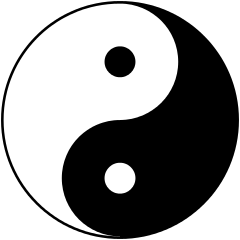 1
Word for "something that cannot be other than two possibilities"
0
Which adjective describes the "either ... or ..." relationship?
3
What is the difference between "dichotomous", "binary", "boolean", etc.?
2
Is "you can't have it both ways" impolite? What's a polite alternative?
1
Word that means having a choice between two options
-1
What's the word for sentences like - "There are two kind of people in this world - those who like ice-cream and those who don't"

7
What's the best term for "geographical level"?
1
Is there a single word for being "financially literate"?
3
A state or feeling of being ready to fill an obvious void
0
One-word quantifier which expresses "always, except by chance"
1
Word to describe explicit comparison between somethings original state and its current state
3
Word for having no impact on state
13
Is there a word to describe someone who is, or the state of being, content with hanging around others without interacting with them?