Is there any Idiom or provide verb that would imply " You cannot conceal such facts or issues"?

I'm looking for an idiom or expression that could be used for criticizing someone who tries to hide a big fact in their life/ an important issue while the nature of that fact/ issue is so that it will be disclosed inevitably.

1- A pregnant woman who tries to hide her pregnancy

3- A person who has fallen in love with somebody, engaged or married recently but tries to not disclose it

4- A country that sells military equipment and ammunition to another country secretly (but it is clear that after those equipment are applied or used, everybody would find out where they have been made in.)

We Iranians use this proverb:

"You cannot ride a camel furtively."

"Why are you trying to hide you're pregnancy?! You'll eventually start showing and people will know. As the proverb says "You cannot ride a camel furtively".

Is there any idiom, expression, or proverb for criticizing behavior or implying " such facts or issues cannot be concealed"?

1- For a person who tries to conceal the fact he/ she is in love with somebody, I just found this proverb: "Love and cough cannot be hid", but I don't think it can be used for my other examples too.

2- In the bellow cartoon the former president of Yemen is shown while riding a camel furtively (I found it in a Persian website and it had no comment, so I just used it for showing that Persian proverb and translated the Persian texts into English). 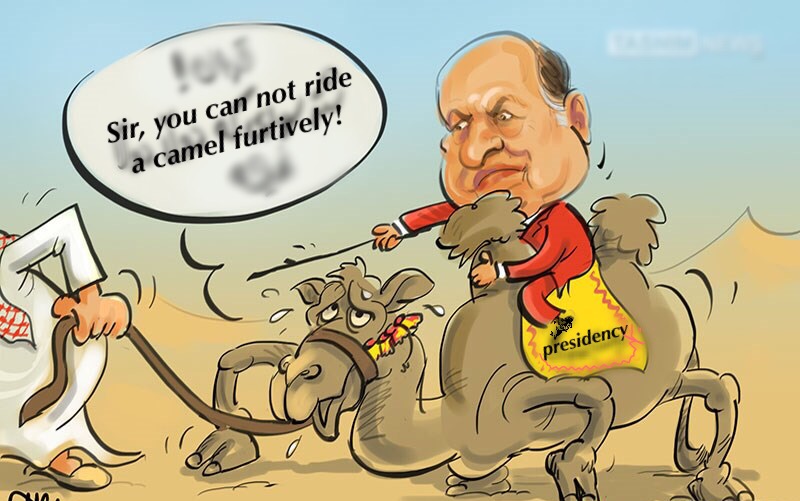 If, like the Americans mentioned in this good ELU answer, you don’t mind slightly mixing two metaphors/expressions (the ones about the elephant in the room and the 800-pound gorilla) and then using the result as a simile that, although unrelated to the strict meaning of either of the two originals, would nevertheless mean "such facts or issues cannot be concealed," you could consider:

(from ‘Labor of Love: The Story of One Man's Extraordinary Pregnancy’ by Thomas Beatie, via ‘Google Books’ where it’s used in “Hiding a pregnant man is like trying to hide an eight-hundred-pound gorilla.”)

Elephant in the Room

Usage
The term refers to a question, problem, solution, or controversial issue which is obvious to everyone who knows about the situation, but which is deliberately ignored because to do otherwise would cause great embarrassment, or trigger arguments or is simply taboo.
The idiom can imply a value judgment that the issue ought to be discussed openly, or it can simply be an acknowledgment that the issue is there and not going to go away by itself.

"800-pound gorilla" is an American English expression for a person or organization so powerful that it can act without regard to the rights of others or the law.
The phrase is rooted in a joke riddle:
"Where does an 800-lb. gorilla sit?"
The answer: "Anywhere it wants to."
This highlights the disparity of power between the "800-lb. gorilla" and everything else.
The term can describe a powerful geopolitical and military force, or, in business, a powerful corporate entity that has such a large majority percentage of whatever market they compete within that they can use that strength to crush would-be competitors.
(The metaphor includes an inherent bit of hyperbole; the highest weight yet recorded for an actual obese gorilla is 600 lb. (270 kg). The average weight is 400 lb.)
The metaphor has been mixed, on occasion, with the metaphor of the elephant in the room.

One way or another, in spite of all efforts to conceal it, the truth will come to be known.

Not too much of an idiom, but "The truth will come to light" has been used in this scenario since probably before Shakespeare used it in The Merchant in Venice (Act 2, Scene 2):

Well, old man,I will tell you news of
your son: give me your blessing: truth will come
to light; murder cannot be hid long; a man's son
may, but at the length truth will out.

The last part, truth will out has come to mean the longer phrase.

The cat will soon be out of the bag

Let the cat out of the bag = to reveal a secret

The shit will hit the fan (warning: vulgar)

The shit has hit the fan = A scandal has erupted, the situation is a huge mess. This can also apply to revealing a big unpleasant secret.

However, both of these merely describe the situation. They do not directly admonish the person who is trying to keep a secret.

Concealed or secret, as in The design for the new plant is under wraps. This idiom frequently is put as keep under wraps, meaning "keep secret," as in Let's keep this theory under wraps until we've tested it sufficiently. It alludes to covering something completely by wrapping it up

A Dictionary of American Proverbs

There's nothing hidden/concealed that will not [be revealed]

Be very sure that what is secret today will be very public tomorrow.

It’s true. Famous people soon hate the fact that everything in their lives becomes public. The media dig into their background. The paparazzi photograph their every move. They can’t go to a restaurant or a sports event or a theater without someone spotting them and a crowd gathering. Almost nothing stays private.

Part of us enjoys the revelations the media gives us about superstars. And part of us realizes how difficult it must be if everything about you gets known.

Jesus, though, is very clear that ultimately everything about all of us will get known. He says that in four sets of parallels:

!1) There’s nothing concealed that will not be disclosed.

2) There’s nothing hidden that will not be made known.

3) What has been said in the dark will be heard in the daylight.

4) What has been whispered in a private, inner room will be proclaimed from the roofs (vs. 2-3).

[You can] be sure your sins will find you out

You can't keep a lid on that forever.

This is a harsh way to point out that something cannot be controlled or held secret for long. The truth will escape despite one's best efforts to prevent it.

"It's as plain as the nose on your face!" is a common retort to someone trying to deny or hide an obvious fact. "Elephant in the room" has an unstated ending "that no one wants to talk about" used in a different context - everyone sees it, but it's uncomfortable to acknowledge.

On your topic I like these two idioms of the English language.

"Between you and me and the cat's whiskers" This idiom is used when telling someone something that you want them to keep secret.

"A little bird told me" Said if you know who gave you the information being discussed but do not want to say who it was.

The idioms can be used in the context of your proposed situations: to criticize someone who tries to hide a big fact in their life

25
Idiom or proverb that implies " the evidence contradicts what you claim"
3
Is it alright to mix metaphors?

6
Is there any proverb or idiom that conveys "the world is bound to no man"?
74
Idiom criticizing a person who has unsolved problems but tries to give someone advice about them
50
English equivalent for the Persian proverb "The mountain just gave birth to a mouse"
21
Idiom or expression request that would convey same meaning as this Persian set phrase " simple yet impossible to imitate"
23
Idiom request for recommending someone to end their toxic relationship/ friendship with somebody
12
Is there any equivalent for this Persian proverb "A lopsided load won't reach the destination"?
7
Idiom request for critisizing someone who ignores or overlooks their old things or friends, in an annoying manner, after having or finding new ones
10
Is there any idiom or expression that would imply " It is hard to argue against such rationale"?
3
Idiom or expression that would imply "someone is showing equivocal behaviors that indicate a feigned reluctance"
7
What English idiom or proverb is equivalent to this Hindi expression: "Having eaten 900 rats, cat moves to Hajj"