"Pretty please with sugar on top"

Where does this expression come from?

I understand when it's used, but I was wondering about its origin. 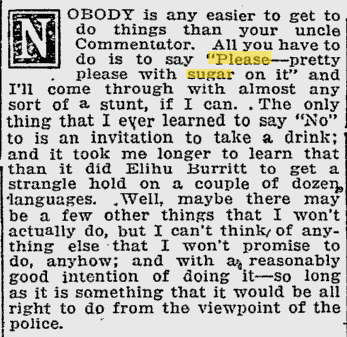 According to The Word Detective:

The earliest citation in the Oxford English Dictionary for “pretty please” is from 1913, and the earliest for “pretty please with sugar on top” is from 1973. But my guess is that “with sugar on top” actually arose much earlier, at least by the 1950s. While sprinkling sugar on food has a long history, it was in the 1950s when ready-made sugar-coated breakfast cereal became popular, and the phrase may have been spawned then in imitation of advertising (“Ask Mom for Choco-Balls — the ones with with sugar on top!”) for such wholesome fare.

If you're a word lover, the whole article is well worth reading.

Robusto's answer cites the OED as giving a first occurrence date for "pretty please" (without the sugar) of 1913. An Elephind search, however, turns up a number of earlier instances—most of them clearly used in the same sense—including this striking instance from an article titled "Ethics of Beauty: How to Teach the Children: To be the Little Gentleman and the Little Lady—The Matter of Manners in the Household," by Shirley Dare, in the Indianapolis [Indiana] News (December 1, 1888):

The manners of Republican society to servants and employers need revision. Alternate familiarity and “bossing" is the rule with the young people of a family, unless they adopt the English tone of addressing a servant as if he were a block of wood. I should be ashamed to speak to a dog in the brutal tone heard from women who have bean abroad. It does not seem necessary to say "please" or "thank you" for hourly service, counted in the bond, either to servants or children, but they can be told to do things in a pleasant way, that is as far from domineering as it is from the "pretty please" fashion. And this tone and manner you must train children to adopt. They are very autocratic by nature, and a habit of ordering comes altogether too easy.

A second occurrence appears less than a year later in a poem titled "The Fate of the Drones," by E. Cecille Brown, of Mt. Hope, West Virginia, in the Indianapolis [Indiana] State Sentinel [October 16, 1889):

Such a grand display of unconcern and disdain/ Was tendered those leave-taking bees;/ But era long their boasted pride began to wane,/ And they'd have humbled to a pretty please;/ But it runs, those workers never returned,/ That the drones were left to their fate—/ To die of starvation—by their kinsmen spurned,/ With only one left this tale to relate.

"Give me that rose and I'll go," he said, laughingly, to Lou.

"No; or if I do, I'll fill it full of pepper. You're the worst tease I ever saw, Howard Dwight."

Now, whatever may be the weaknesses of that part of Lincoln which calls itself "society" snobbishness is not one of them. Its motto has long been that whosoever would and had a dress suit might come. Exclusive! As though Lincoln could be anything so cruel! There is indeed a rumor of a dictator who was deposed, but I have always thought that he grew tired of the cares of state and vacated very willingly, which hurt the feelings of his prime ministers so much that they slaughtered him. With few exceptions whoever smiled and said "pretty please" was welcomed into the ranks of the elect. Lincoln society is not snobbish. That charge is rank slander. It recognizes the dignity of labor, and bestows its brightest smile upon the active.

Then from "Municipal Matters," in the Los Angeles [California] Herald (December 23, 1900):

July 23—H. Gaylord Willshire said "pretty please" to the council for ten-foot billboards Instead of a stingy six.

And from "The Latest Parisian Gowns in San Francisco," by Medge Moore, in the San Francisco [California] Call (August 23, 1903), an example that takes "pretty, please" in an odd direction, as if it referred to a recognizable posture or attitude rather than to a wheedling form of request:

That girl's fun is contagious. She simply brims over with vivacity and high spirit and even the doubtful pleasure of standing up and looking "pretty, please," in half a dozen gowns was considered in the light of a great lark. It wasn't a bit of trouble for her, and she tripped about leaving a trail of laughter and good humor behind her.

The "with sugar" topping seems to have come significantly later. The earliest instance of the combined expression that I've been able to find is from "An Era of Charter Making," in Equity Series (published in Philadelphia, January 1912):

There is an earnest association of cities of the third class which is striving for the privilege of freedom in charter making, and if these oppressed people say "Please" to Senator [Boies] Penrose [of Pennsylvania], with sufficient humility—"Pretty please, with sugar on it"; and swear to support the machine ever after—they may be allowed that privilege some time in the future. And this is a free country, they say—the land of liberty, justice and right! Well, it will be, when every town, county, city and state under the stars and stripes have the Initiative, Referendum and Recall.

I found instances of "pretty please" in arguably the relevant sense as early as 1888—and in unmistakably the relevant sense as early as December 1893. All of the earliest instances are from the United States, in an odd configuration: two from Indianapolis, Indiana (in different newspapers) in 1888–1889, then two from Nebraska in 1893–1895, then two from California in 1900–1903, and then one from Illinois (not included in this answer) in 1906.

The earliest "pretty please with sugar on it" I've been able to find is from January 1912, from a periodical published in Pennsylvania.

Just watched a Twilight Zone (Season 3, Episode 17) where the teacher character said "pretty please with sugar on it" .. That from the 1960s and is the earliest popular media reference to the phrase I've heard.

It's origin came from a far past but started to become even more popular after Winston Wolf's quote from the 1994 movie Pulp Fiction directed by Quentin Tarantino.

"So, pretty please... with sugar on top. Clean the fucking car."

A lot of celebrities started using it as a phrase, they started to do it more often when they found it quite catchy. After that it became a thing and some changed the rules and some followed. Before that it was pretty much unknown and not really important to the trendy folks as it was never spoken as much as it did a year after the movies release.

I speak from my own experience as I remember entering the cinema and leaving it with everyone talking about that exact scene of the movie. Later on it became annoying as it was used a lot.

6
What does "please with sugar and knobs on" mean?
4
Pretty Please and Similar Phrases