What do you call the space where you park a car? Parking spot, space, bay or what?

I am looking for the correct/common way to call the single spaces which are generally clearly visibile in parking lots as you can see from the picture: 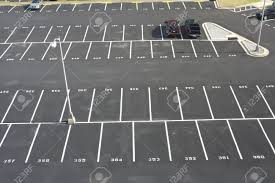 I would probably call them "parking slots," but I am not sure if that is correct and I could not find any reference apart from this one, which clearly refers to a different context.

According to the Collins Dictionary a parking bay is:

Any reference to American English or British English would be appreciated.

In American English, we generally call them parking spots. Occasionally we refer to them as parking spaces, but parking spot is what I hear most commonly.

Reading all the comments and answers so far it seems to me that both US and UK usages are actually pretty similar.

A parking 'space' is the usual term for a formally delineated 'space-to-park-a-car' (e.g. in a car park/parking lot). It can be impersonal and classificatory.

A parking 'spot', on the other hand, is rather like a picnic spot - namely somewhere you find for the purpose of parking (or picnicking) irrespective of whether or not it is formally set aside for the purpose. It is not (yet!) typically impersonal and classificatory.

Parking bay has always sounded like a US import to my British ears. Ngrams shows 'parking bay' usage began around 1940 with 'parking bay's first entry in the OED (almost twenty years after usage begins on ngrams)

In my mind a parking bay is associated especially with corporate parking provision.

In British English they are commonly known as Parking spots. We get headlines about parking spots selling for hundreds of thousands of pounds, and colleagues who complain that somebody has nicked their parking spot.

In more formal British English these are also described as parking spaces. This is the term suggested by Longman's Dictionary:

Use parking space or parking place when you mean 'a place in a street, car park etc where a vehicle can be left'

• There's a parking space (NOT a parking) in front of that house.

It depends on how precise or pedantic you want to be. In the photo you provided, a single location for a vehicle would commonly be called a parking spot, particularly in the commercial transportation industry where each location is uniquely numbered. I would propose this as the best answer regarding the information you have given.

Another common term for the same thing is a parking space, though you are probably more likely to hear that term regarding locations along a street. Although these may also be numbered, it is not as common.

A parking stall impiles that there is a three-dimensional structure fencing in the location, though this, too, is a generally used term, particularly in an enclosed or walled-in area.

A parking bay is like a stall, but is typically a larger area that may contain multiple spaces or stalls for large vehicles, such as trailers or buses. Access is usually limited by walls or posts, as you would find in a multi-level parking deck or under a roofed area like a bus terminal.

Parking slot would not be incorrect, either. I would say this term should be reserved for locations that tend to be used by uniformly-sized vehicles. It also brings to mind an automated parking system where vehicles may have to be placed by some means other than simply driving into the space.

Parking lane would be for multiple vehicles, usually placed end-to-end in a queue. The last vehicle would be driven into one end of the designated area and the first vehicle would be driven out. Other vehicles in the line would typically have to wait until they are at one end or the other before they could be removed from the lane. Informally, this same term could be used for a line of parking spaces along a street or road where vehicles may parallel-park.

In American English at least, there is a subtle distinction in connotation between parking spot and parking space: the former is a specific location in the world, the latter indicates the region in which you park.

Parking spot is used to designate the location at which you parked. In the context of your picture, someone might say "Your car is in parking spot number 5" in order to indicate where in the lot your car is.

The usual word used on car park signage in the UK is spaces. "Parking bays" is also used in official documents, but I think the original usage of "bays" referred to designated loading/unloading points for buses (i.e. the coach station equivalent of a railway station "platform")

Typical UK car parking signage (showing the number of free spaces near the location of the sign): http://www.sarfend.co.uk/images/southend_parking.jpg

Use of "bays" for "spaces" (both for cars and coaches): http://www.derby.gov.uk/transport-and-streets/public-transport/information-and-advice/

In BrEng a parking spot would usually refer to a general geographical location (e.g. "there are often some empty parking spots on XYZ street") rather than to a marked space for one vehicle. FWIW, "parking spot" is not in http://www.oxforddictionaries.com/)

North American A marked-out parking space for a vehicle: a parking stall

A space marked off for parking a motor vehicle

A rectangular space marked off or reserved for parking a car or other vehicle, as in a parking lot.

(US) Any of the spaces marked off, as in a garage, for parking individual automobiles.

I've never used the term 'parking stall' but I understand it to be one of the names for a space marked off for parking a motor vehicle in a garage or parking lot. I would call that a parking space, but of course, a 'parking space' can also be defined as any area where a vehicle can be parked, whether or not it is marked off for the purpose.

So a parking stall will always have white markings at the boundaries. A parking space may be synonymous with 'parking stall' or may be a more general area for parking. (emphasis is mine.) english-test.net

Parking stall sizes are controlled by local zoning and building codes. In most cases and most local building codes, the number of stalls is determined by the square footage of office or retail space.

The car is not over the line...of the actual, uh, parking stall

In Australia, it is a parking spot or, simply, a park. Anywhere where there are parking spots is parking, and where the spots are organised it is either a carpark or parking.

A: 'Did you manage to find a parking spot at Doncaster?'
B: 'Yes, but the carpark was very busy.'

A: 'You can come visit me; there's a park out the front.'
B: 'Oh, good! I won't have to pay for parking. I like the parking spot outside your house.'

The most common usage I have heard (by far) in American English is "parking space." In my own family, however, we refer to that space as a "park."

The most proper answer in the U.S. is parking stall. This is the term used in building codes and municipal codes and on architectural and civil drawings.

Not the answer you're looking for? Browse other questions tagged word-usage american-english british-english image-identification or ask your own question.

2
What's the formal name of single cell in a parking lot?