“light at the end of the tunnel” earliest occurence

I could ask this question on German.SE and probably a number of different indoeuropean SE sites as well, but here's my question:

When looking at various online resources the metaphor "to see light at the end of the tunnel" is dated around 1800. For example, here, from user d_r_siva on Yahoo! Answers:

This metaphoric expression dates from the 1800s, but became widespread only in the mid-1900s.

However I recently came across the painting Visionen vom Jenseits (Ascent of the Blessed?) by Hieronymus Bosch: 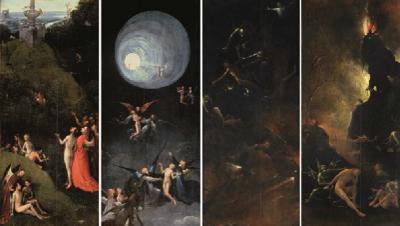 This painting dates from from the 15th century, and one can clearly see a tunnel to paradise or the beyond or next world.

Since when does the metaphor exist and where does it come from?

Its earlest occurrence in the English language is from 1882 according to the online Etymology Dictionary.

From Dictionary.com : Light at the end of the tunnel:

Newspaper database searches turn up instances in which "light at the end of the tunnel" is used in a literal sense going back to the 1850s. But the earliest figurative sense of the term appears to be this one, from "The Woman Who Was Done," in the St. Louis [Missouri] Republic (July 13 1902):

"Oh, that [Ima Spunge] isn't her real name, but we—the girl who shares the apartment with me and I—call her that. Coz why—she is such a dreadful little sponger. I shan't tell you who she is, for it would be unkind—you might recognize her. But she always leaves me absolutely prostrated after one of her calls. And so we have likewise dubbed the illness which ensues parasitus."

"I begin to have glimmerings of light at the end of the tunnel of mental darkness you've been dragging me through. So she is a parasite?—a kind of pretty, hideous human orchid, feeding on other people. I know one or two myself."

As to the students' library, I am at last able to see light at the end of the tunnel. The Right Rev. Dr. Carroll, Bishop of Lismore, has very generously promised one hundred pounds. And I have received donations of £5 each from the following The Sacred Heart Nuns, Rose Bay; the Sacred Heart pupils, Rose Bay; "a Sydney priest;" Miss Hally, Turramurra; Mster Dick Honnor, Junee; Mr. Neil Macdonald, Neutral Bay. In all, between cash and promises to date, I have rceived for the library £380 out o the £500, which was estimated as needful to make an effective beginning.

And from a letter to the editor of the New Ulm [Minnesota] Review (March 7, 1917), from A.G. Wagner of Kiesling, Washington:

So the day seems to be dawning upon which more people will discern that instead of condemnation and denunciation of those who differ from us, is about to be relegated to the rear and a more wholesome and a more sane concept is to prevail with which the inherent decency and kindly human spirit will manifest unshackled and unrestricted for the peace and happiness of all. "Love's struggle throughout the ages" yet continues, but "there's light at the end of the tunnel," I feel.

This last example is interesting because it puts the "light at the end of the tunnel" saying in quotation marks, as though it were a recognized idiomatic phrase.

One later but potentially very important instance of the phrase "the light at the end of the tunnel" in Google Books search results (with regard to popularizing it) is in a paper, "The American Proposal for International Control," presented by Bernard Baruch, and reported in Bulletin of the Atomic Scientists (July 1, 1946):

All of us are consecrated to making an end of gloom and hopelessness. It will not be an easy job. The way is long and thorny, but supremely worth traveling. All of us want to stand erect, with our faces to the sun, instead of being forced to burrow into the earth like rats.

The pattern of salvation must be worked out for all.

The light at the end of the tunnel is dim, but our path seems to grow brighter as we actually begin our journey. We cannot yet light the way to the end. However, we hope the suggestions of my government will be illuminating.

Baruch then went on to quote Abraham Lincoln to the effect that "The fiery trial through which we are passing will light us down in honor or dishonor to the latest generation." Baruch's remarks were evidently widely repeated and discussed. Three years later, as reported in "The Great Inquiry: Testimony at AEC Hearings," in Bulletin of the Atomic Scientists (August–September 1949), David Lilienthal (chairman of the Atomic Energy Commission) offered these remarks in testimony at a senate hearing:

On the 14th of June, 1946, Bernard Baruch, in one of the great state papers of all time, summarized where mankind stood: "The light at the end of the tunnel is dim, but our path seems to grow brighter as we actually begin our journey."

In April of 1947, when the Commission began its work, that dim light at the end of the tunnel was so dim as to be no light at all.

Russia, an Russia only, among the great nations of the earth, has been unwilling to take those steps which might make that dim light brighter.

Baruch's statement of hope about the dim the light at the end of the dangerous tunnel of atomic power (and the development of nuclear weaponry) may have led to widespread use of the saying, including (very famously) U.S. General William Westmoreland's use of the phrase in November 1967 in the context of Vietnam, and less famously (but earlier) in Lyndon Johnson's statement in 1966 to the same effect:

I urge you to remember that Americans often grow impatient when they cannot see light at the end of the tunnel—when policies do not overnight usher in a new order. But politics is not magic. And when some of our fellow citizens despair of the tedium and time necessary to bring change—as, for example, in Viet Nam today‚they are forgetting our own history.

The earliest instance of light at the end of the tunnel in Google Books is from 1921. It deals with a visit to Washington by the then British Prime Minister Lloyd George to attend the Washington Naval Conference, I think. The same article appears simultaneously in the Christian Register and the Unitarian Register:

Mr. Lloyd George is confident that the Washington Conference will not end in mere resolutions, but in a real pact of peace. He sees the light at the end of the tunnel. God grant that we may emerge into that light.

The next instance in Google Books is from 1932. This time the tunnel refers to the Great Depression, which had started with the 1929 stock market crash, and an end to which was not in sight for some yet. I managed to put together a fairly clear text from this snippet of The Literary Digest and this other one that Google lets us see:

I am willing to do my best when it comes to the future. I hope we may all see the approach of light at the end of the tunnel. Some people already have been able to point out that light to us. I, myself, see it somewhat indistinctly, but I admit that, for the moment, the way is not clear.

To this country it should reveal, first of all, that this depression is not America’s, or the Republican party’s, or Mr. Hoover’s private depression.

That Mr. Norman, with his international outlook, sees less of "the light at the end of the tunnel" than we do, should, however, mean something more to us. It should mean that the United States, with its continental size, resources and moral stamina, has, when it takes what it calls “the short view,” a greater capacity for recovery than most of the world that is under Mr. Norman’s immediate ken.

Mr. Norman was justified in not seeing the light at the end of the tunnel, as the U.S. did not manage to fully get out of the depression before the World War 2. The next tunnel, reported in Princeton Alumni Weekly (April 3, 1936) looks like a trivial affair by comparison:

He says he is trying to dig out from under a mountain of emergency bills, but can see a little light at the end of the tunnel, and much can happen between now and June 11. Where there's a will there's a way, and we know Barnum has the will.

From 1940s on the idiom appears very frequently in Google Books.

Not the answer you're looking for? Browse other questions tagged etymology metaphors or ask your own question.

10
Why does “trip the light fantastic” mean “to dance”?
0
How did 'security' semantically shift to mean 'tradable financial asset'?
7
Origin and earliest recorded use of 'fungo'
23
What word did Middle English have in place of “light" as in: “light blue”, “light green” etc.?
9
Are -èd adjectives still usèd words?
7
How did the word 'Gang' come to represent the switches in a light switch
0
What's the earliest use of man as a suffix?
8
What is the origin of “see things in a different light” or “see things in a new light”?
9
The “prickmouse” and the “butcher's broom”