Term for the second letter in Sx, Dx, Rx?

In abbreviations such as Dx (diagnosis), Sx (symptom), and Rx (prescription), is there a specific term for the second letter in the abbreviation?

I have tried to google this but end up with results explaining the meaning of the abbreviations, rather than the specific term for the "x".

Rx is, as Dan Bron observed in his comment, most likely an approximation of the Latin '℞', which is an 'R' with a slashed leg. The 'R' stands for recipe, the Latin translation of the imperative take (here). Another, more dubious, etymology links it to the Egyptian eye of Horus or the Greek symbol for Zeus.

From the research I could find, nobody knows anything specific about this symbol.

I did discover, however, that Latin scribes had special abbreviations called sigla (here). Sometimes scribes would suspend words, which means that they would leave their ends cut off, often leaving only the first letter. When scribes did this, they would mark the abbreviations with special suspension symbols (see the Wikipeida section on "specific suspension", here).

It seems very likely (to me at least) that the slash through the leg of the 'R' was precisely such a marking. After all, it resembles some of the suspension sigla Wikipedia shows: 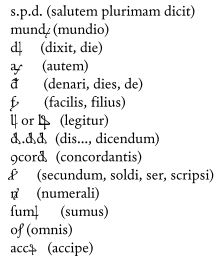 As to the question or whether or not there's a specific name for the symbol 'x' as it appears in medical abbreviations, there is. Unfortunately, the name is just 'x'.

Not the answer you're looking for? Browse other questions tagged terminology abbreviations or ask your own question.

20
Capitalization of explanation of abbreviations
5
Does the word “units” have a valid abbreviation?
3
Is there a concise term or abbreviation for “Decimal Places”?
1
Symbol for 'Or'
4
Is there a distinct term for acronyms with multi-letter parts?
2
The term for caring more about problems that you see as directly affecting yourself