Idiom request for describing someone who is writhing in great pain

How do you describe someone who twist their body from side to side and bend it in reaction to a great pain? Like the men in the pictures below.

We Iranians have an expression that says:

to twist about/ around like a snake because of pain/ agony

"After the car accident, the driver was twisting around like a snake because of pain, but there was no one to help him."

Is there any idiom or expression with the same connotation in English too? 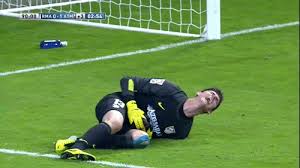 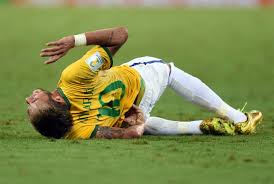 You have it already: writhing in pain is the usual way to express this scenario, and snakes are said to writhe.

Although there is a general transitive sense of writhe meaning to twist something, when referring to the human body, writhing is commonly used to describe the involuntary contortions associated with pain, laughter, anger, or pleasure.

One can also writhe deliberately, as to enjoy a warm bed on a cold morning, or to slink on the dance floor. It suggests more languid movement than wriggling or squirming — snakes typically writhe, worms wriggle, and children squirm. But while it isn't an idiom in the sense of a figure of speech, it is an evocative word. If writhe appears in a news headline, one would not be faulted for immediately assuming someone is either writhing in agony or writhing in ecstasy.

Writhing in pain has become much more popular than writhing with pain, but both can be found in current usage.

As an aside, writhing in agony seems to me to be even more common than "in pain" (subjective, but worth noting as also common.

In English, the equivalent phrase is racked with pain

The player was racked with pain after colliding with the goalkeeper which fractured his Fibula.

Adding to choster's great answer, they are groaning in (with) pain lying on the ground. To groan is a broadly used verb to mean:

to utter a deep, mournful sound expressive of pain or grief.

The players are groaning in pain lying on the ground after getting kicked in the stomach (back) by an opponent.

I'd suggest, rolling on the ground(, writhing) in pain/agony

If someone is 'writhing in great pain' you can say they are in agony (the point is made clearly without adding descriptions of how they are moving!).

Agony - Extreme bodily suffering, often such as to produce writhing or throes of the body; severe pain.(OED)

If you are after a verb, you can use "to salmon" or "salmoning" (nothing to do with salmon).

This is named after the distinctive wiggling of salmon as it leaps through the air, when swimming upstream.

73
Idiom criticizing a person who has unsolved problems but tries to give someone advice about them
13
Idiom request for speaking about punishing or scolding somebody before they are proved guilty, just out of prejudgement
50
English equivalent for the Persian proverb “The mountain just gave birth to a mouse”
23
Idiom request for recommending someone to end their toxic relationship/ friendship with somebody
6
English equivalent for the Persian idiom “Putting the drill on poppy”?
8
Idiom request for describing an uncrowded or a deserted place
7
Idiom request for critisizing someone who ignores or overlooks their old things or friends, in an annoying manner, after having or finding new ones
7
Idiom or expression criticizing people who ignore you right after getting what they wanted/ were after
3
Single word request and/or idiom—worse news