What is the difference between a catch and a handle?

What is the difference between a catch and a handle? Ain't they the same thing?

But here it said they got no handle but a catch:

It was very dark and dusty and draughty and they stepped from rafter to rafter without a word except when they whispered to one another, "We're opposite your attic now" or "this must be halfway through our house". And neither of them stumbled and the candles didn't go out, and at last they came where they could see a little door in the brick wall on their right. There was no bolt or handle on this side of it, of course, for the door had been made for getting in, not for getting out; but there was a catch (as there often is on the inside of a cupboard door) which they felt sure they would be able to turn.

This diagram may help: 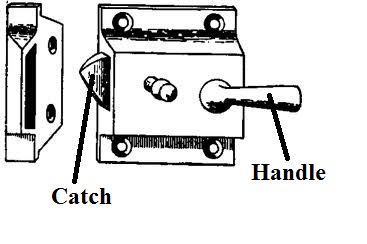 Some might argue that the catch is actually the piece that the part labeled "catch" goes into, but I'd call that a "stop."

The catch that is described probably would look something like this:

which is similar to an old fashioned cupboard catch, and would be fairly simply to push open if one were inside the cupboard. (Edited image to one with a turncatch.)

Here is a (hopefully) clearer example. The shaft of this knob would be put through the door, and the blade (catch) at the end would keep the door from opening unless you turned it. We called these "grandfather locks" when I was a kid, but I don't know if that's common usage, or just my family. 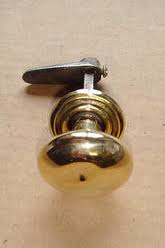 A handle is what you grab to open a door, a catch is the mechanism that keeps it closed.

Sometimes you turn the handle to release the catch.

A catch holds a door closed, but you pull a handle to open it.

6
What do I do to a door knob to open the door?