Is there an idiom for “making a puerile excuse”?

In Italian there is a juicy idiom when somebody gives a risible explanation: knowing that children can delude themselves and try to deceive others when playing hide-and-seek, 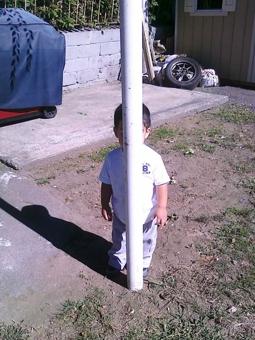 Is there a set phrase (I mean one everybody recognizes as such) in English? Can you think of anything more appropriate than "making puerile excuse[s]---"?

That is the nearest I could find, but I fear is not a set phrase:

We cannot hide behind the puerile excuse of 'since we can't be perfect, we should not even begin'. That's little more than NRA-speak for don't .

The child in the picture is playing hide-and-seek, he is deluding himself he can't be caught; a finger is even smaller than a post.

"The dog ate my homework" is a popular idiom that would fit your context, though it's apparently more popular in British English.

Refuse to face something by pretending not to see it. For example, For years we have been hiding our heads in the sand, refusing to admit that the store is losing money, or When it comes to a family quarrel, Dean just buries his head in the sand. This expression, transferred to human behavior in the early 1600s, alludes to the belief that ostriches burrow in sand thinking they will not be seen because they cannot see. In fact, however, when they do this, they are consuming sand and gravel to aid their digestive system. The American Heritage® Idioms Dictionary

First, it is true - let us not bury our heads in the sand - that the defence of human rights in Morocco today still involves police action, court judgments and conditions of imprisonment which are often unacceptable. Collins French-English Dictionary

swear (that) black is white

To deny the obvious. ODO

In Britain, a lame excuse would usually be termed a cock and bull story but that doesn't really capture the childish implication of the Italian phrase.

A closer term would probably be fairy tale which implies that the excuse is fabricated, fanciful and somewhat infantile.

Although I can’t think of a stand-alone, fixed idiom that contains it, “childish reasoning" could work (and perhaps be a bit more idiomatic than "puerile excuse/s") in your example:

We cannot/shouldn’t fall for the childish reasoning of/behind 'since we can't be perfect, we should not even begin,' which is little more than NRA-speak for ‘don't.’

(multiple usage examples of “childish reasoning” from ‘Judgement and Reasoning in the Child’ by Jean Piaget, via ‘Google Books’)

For a well-known idiom, albeit less literally capturing “puerile excuse” than “childish reasoning,” that could also work in your example, there’s “let’s not kid ourselves,” which also has its own Acronym (LNKO) (from ‘Urban Dictionary) or the singular variation “don’t kid yourself (from ‘Yahoo Answers’):

Let’s not kid ourselves/Don’t kid yourself [into thinking] that 'since/just because we can't be perfect, we should not even begin,' which is [just childish reasoning and] little more than NRA-speak for ‘don't.’

"Fig leaf" is another phrase that is used for a flimsy and unsuccessful attempt to conceal something. In that sense, it parallels the Italian expression. You could insert "fig leaf" as a drop-in replacement for "puerile excuse" in the above sentence and it would be understandable. All the same, "straw man" makes more sense in that particular argument.

You might say, "Pull the other one!" It may be a derivative of pulling someone's leg, but it is idiomatic in its own right.

As @StuperUser notes, the fuller phrase is "Pull the other one, it's got bells on it." (This version also appears in the dictionary definition linked below.) It's also expressed as "pull the other one, it's got brass bells on". Peta31 at LibraryThing mentions an Australian version "pull the other leg it plays jingle bells!". I'm not sure whether these are embellishments to the shorter version or whether the shorter version is truncated from one of the others, but Ngram indicates that the bells versions (at least the first two) are much less common, with the brass bells version not even appearing (you may need to click on the "search lots of books" button to get that last message).

You could say that the excuse is a logical fallacy, that of the Straw Man, since they are replacing a call for action with their straw man of a call for perfection. Perhaps that particular fallacy is just specific to your example. Most puerile arguments will be logical fallacies, I'd imagine, if for no other reason than if something is logical we are unlikely to say it is childish.

Or, since the argument is also a deflection, you could reference a reverse of the Wizard of Oz line:

"Pay attention to the man behind the curtain, rather than the wizard made of smoke and mirrors"