In Persian poetry there is a style which literally means:

It implies that the poems have been told using simple words and in a seemingly simple way, yet cannot be imitated by others; the poet has told his/ her poems using very simple ordinary words and compositions so that everybody would easily understand them, however; the poems have such profound meanings and strong structures that no one else would be able to imitate that poet in telling similar poems.

In Persian poetry "Saadi" is famous for using this type of style in some of his famous poems.

Is there any idiom or expression that can convey this meaning? (I need to translate that Persian set phrase into English.)

1- For those who are interested in Persian I write the name of that style in Persian too:

2- This set phrase is used an adjective for describing the style used in creating other pieces of art too. For example; some masterpieces in architecture (like the exterior of a famous building in Tehran that is shown in the picture below, seemingly compositions of simple bricks and tiles, yet creating eye-catching and unique patterns). Besides, it is sometimes used for describing people who are seemingly simple but have profound, admirable and kind of unique characters such as "Mahatma Gandhi". 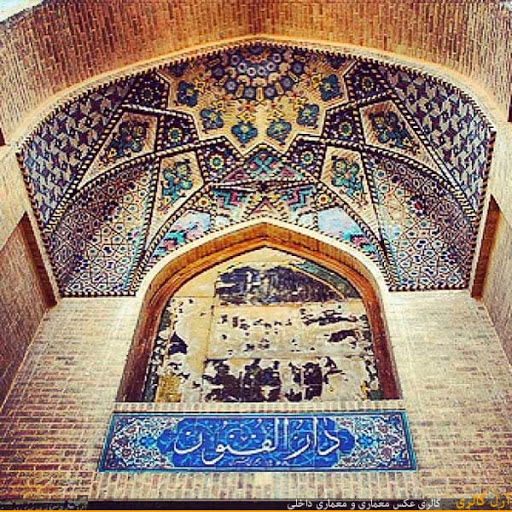 Deceptively simple, perhaps (i.e. not so simple as it appears to be)

I can't think of an idiom, but the expression I'd use to express the concept of "simple but impossible to imitate" is:

unique in its simplicity.

The expression is used as shown Ngram and clearly refers to something impossible to imitate (unique) but simple.

I’d describe such a style as “inimitably simple,” or as one of “inimitable simplicity.”
(usage examples found on ‘Google Books’)

For an expression that’s less of a simple literal translation of the original phrase in question than my two suggestions above, you could consider using “simple beyond compare" as it’s used in the linked description of a poem found at ‘Google Books’ in Manfred Pentz’s book ‘The Crimson Goddess: A Novel’.
You’ll note that Mr Pentz follows “simple beyond compare” with “and deep beyond measure,” which is, in my opinion, a lovely phrase that you could likewise use together with “simple beyond compare.”

And finally, to the extent that unambiguously maintaining the notion of “impossible to imitate” is not essential, you could consider “impossibly simple [style].”
(usage example from ‘Edward Said: A Legacy of Emancipation and Representation’ by Adel Iskander, Hakem Rustom, via ‘Google Books’)

Leonardo da Vinci is said to have said "Simplicity is the ultimate sophistication".

There's the phrase "elegant simplicity", which I take to mean not so much "elegance" as in decorativeness, but the beauty in simplicity.

The Japanese have a concept of Shibui, of understated, timeless, insightful simplicity.

but in terms of English idiom, "less is more"

One somewhat similar phrase that appears occasionally in English is "simple but eloquent," where eloquent may have either a literal or a figurative meaning (as expressed in Merriam-Webster's Eleventh Collegiate Dictionary (2003):

Here are a few examples of how "simple but eloquent" has been used through the years. From Dietrich Stöver, The Life of Sir Charles Linnæus, Knight of the Swedish Order of the Polar Star, &c. &c. (1794):

He [Count Tessin] ordered a medal to be struck, representing on one side, the bust of LINNÆUS, and on the other three crowns, on which the sun casts his beams, with this simple but eloquent motto : Illustrat—He illumines.

From The [Philadelphia] Columbian Star, and Christian Index (August 14, 1830):

We shall leave the administration to speak for itself. We shall permit the simple exhibition of the ordinance to plead its own cause. It will urge its own claims with more power and effect than any arguments which we could employ. It will make an appeal, tacit if you please, but touching—simple, but eloquent—devoid of the pomp of circumstance; but fraught with the interest which a presiding Divinity is able to impart.

From Albert Spalding, "A Violin Master's Contribution," in The Bookman (July 1921):

Personal experiences and anecdotes of more than half a century rich with great memories, color the pages. No music lover can fail to feel his pulses quicken at the simple but eloquent drawing of such portraits as Joachim, Wieniawski, and Vieuxtemps.

The sketch shon in Figure 71 was drawn entirely freehand, with the assurance and skill of the professionl architect. Note what a remarkably straight line training and practice can produce--the kind o line we often hear the lay person say he cannot draw! Practice does indeed make perfect!

Note the esoteric line the architect uses to "fill in the space of sky--a few simple but eloquent lines to suggest clouds.

From Jimmy Carter, "Remarks at a Wreathlaying Ceremony at the Airlift Memorial" (July 15, 1978), in Public Papers of the Presidents of the United States: Jimmy Carter, 1978 (1979):

I am sobered but proud to be with you today at this historic time, to pay my respects to the 78 Americans, Britons, and Germans who lost their lives in the [Berlin] Airlift and who are honored by this simple but eloquent memorial.

From Lawrence Berkove, A Prescription for Adversity: The Moral Art of Ambrose Bierce (2002):

From 1871 to 1891, Bierce's art of the short story was to develop immensely, but even at its peak of excellence it retained essential similarities to the local-color tradition from which it began; even at its mot indirect and "cynical," it was inspirited by the same generous feeling for victims of life that is explicitly manifested by the first-person narrator of "The Haunted Valley" in his simple but eloquent gesture of compassion for the grief-maddened Gopher: "I followed the little wretch back to his wagon and wrung his hand at parting" (154).

We have a single word which means something quite close to this, but only in certain contexts:

When used to describe artwork, the simplicity part might be lost. To get this across, you can use the longer phrase "elegant in its simplicity". I couldn't find a dictionary that listed this as one phrase, but I ran across an article claiming that

Almost everyone has heard or used the hackneyed phrase that something is "elegant in its simplicity."

One thing that might be what you're looking for especially when speaking about the task one is performing. "Easer said than done."

the only somewhat culturally equivalent phrase that comes to mind is

As you know many/most mathematical 'spirit' in Western Europe comes from the arabic world.

We just don't have what I call "mathematical art", i.e., such as the image you included.

Interestingly, whenever one of "our" brilliant mathematical minds or mathematical writers (whether Hoftstaeder, Sagan, etc) of today reaches for art or imagery, to express the feel of the mathematical infinite - simple but impossible - they inevitably use exactly the sort of image you included, i.e. Eastern art.

Another interesting concept in the west is

we use this when trying to touch on what underlying "thing" (which "your" art knows perfectly). You might talk of, oh, the platonic beauty of numbers, or the like. Back in the era of Plato and those dudes, hey had the same sort of connection between the profundities of God, pattern, and the infinite.

Incidentally. I love your use of "eye-catching" in the final sentence :-) You know, Einstein was "clever", Boticellis are "nice", Shakespeare is "not bad". :-)

A somewhat geeky term from engineering is simplicated.

Stout is remembered for his engineering credo, "Simplicate and add more lightness." This would later become best known as the adopted maxim of Colin Chapman of Lotus Cars. It actually originated with Stout's designer Gordon Hooton.[11] William B. Stout Middle School in Dearborn, Michigan bears his name. References[edit]

I slid simphistocated into a couple of papers 30 years ago, but no one noticed.

Use with discretion. Simplicate refers to increasing the refinement and reliability of the design in order to reduce the mental and physical burden associated with operating machinery. But it has escaped mechanical design and is understood and used by the user experience crowd.

Able to impart great meaning or significance with minimal 'noise' in doing so. The 'hard to emulate' nature isn't inherent, but I still think it could work for what you want.

"Deceptively simple" is the most common usage; "simple but eloquent" is seldom used post-1940s. Check out this Google Ngram viewer chart:

‘Having no competitors’ - being simply the best, standing out as the best.

Having ‘no peers’ includes the idea that ‘no-one can imitate it’. Because, having no peers, there is no-one at that level, to imitate it.