Is there an English idiom that is equivalent to "throwing stones at sewage will only spoil your dress"?

There's a colloquial saying in Tamil that I am used to,

If you throw stones at sewage, it's your dress that will get spoiled"

It means if you try to change the opinion/behavior of a stupid/adamant person by offering them some good advice, only your reputation will be lowered because they won't be willing to listen to you. Apart from not paying heed, they would probably name-call or badmouth you in front of others causing embarrassment to you.

Just to give you some context on how this is used, let's say you spot a school going kid smoking cigarettes. You politely walk up to him and advise that smoking is dangerous to health and environment. But he is too arrogant and starts loudly abusing you in public.

That is, trying to help a person who is not willing to listen will only prove to be detrimental for your own good.

Are there any other phrases that I can consider?

A possible duplicate has been raised citing Are there any English idioms to describe “futile benevolence?”

I am not sure about the other question but I should clarify that in my context, the person knows that their actions (benevolent or otherwise) could potentially backfire. Yet they decide to go ahead and confront. The original saying has a slightly humorous or warning undertones to it.

A: Oh my God! Look at those ignorant folks raising slogans against Vaccination...I will go and explain them about all the Vaccination benefits.

B: I suggest not. If you throw stones at sewage (attempt to correct things), it will only spoil your dress (causing harm/embarrassment/ill repute etc.)

The quotation Never wrestle with a pig. You get dirty, and besides, the pig likes it is widely attributed to George Bernard Shaw. I don't know how true it is that he actually said that, but it certainly seems to convey the English-language equivalent of your colloquialism.

A line similar to the pig one is “Do not argue with an idiot.  He will drag you down to his level and beat you with experience.”  Attributed variously to Oscar Wilde, George Carlin, Mark Twain (Samuel Clemens), and others.

Reference: Origin of “do not argue with idiots”.

It's like mud wrestling with a pig. You'll both get dirty but only one will like it! (Just saw Charl E's quote...mine's a popular expression I've heard, not attributable to anyone that I'm aware of.) 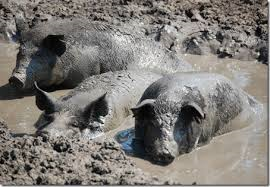 It seems the most similar idiom I can think of is "Spitting into the wind" A useless act of spite against an uncaring target (throwing a stone into sewage/spitting into the wind doesn't hurt it.) with a potentially disastrous result (sewage splashing on your clothes/having your own spit blown back into your face)

If you really want to emphasize what happens to the stone-thrower, consider:

The road to Hell is paved with good intentions.

Both of which carry the connotation that the stone thrower is going to experience trouble for their attempt to do something good.

Pigeon Chess is the more recent incarnation of the pig-wrestling similie: https://rationalwiki.org/wiki/Pigeon_chess

The original quote, referring to debating creationists, was in 2005 by Scott D. Weitzenhoffer:

Debating creationists on the topic of evolution is rather like trying to play chess with a pigeon — it knocks the pieces over, craps on the board, and flies back to its flock to claim victory.

However, the most common version (as seen in internet memes) is:

Do not give what is holy to the dogs, or cast your pearls before swine, lest they trample them under their feet and turn and tear you in pieces. (NKJV translation)

6
Are there any English idioms to describe “futile benevolence?”
12
Origin of "do not argue with idiots"