What is the origin of "Couldn't hit a cow's arse with a banjo"?

This picturesque expression, meaning 'not a very good shot with a rifle' or (of a footballer) unable to score any goals, has cropped up a few times recently in my reading. Does anyone know where it originated?

I believe it is an Irish slang phrase.

Below are some Google findings which make me think this way:

I also came accross an interesting forum thread which mentions this phrase. Here is an excerpt:

Juande the Spurrier: - There is a shovel that is called a banjo, because it's shaped like the musical instrument. Seems a farmer might be more likely to have a shovel than a banjo.

With further research, I found out that banjo is a shovel type indeed.

Banjo (as a shovel): 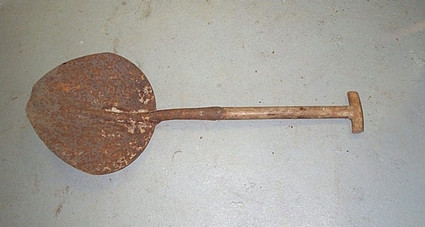 Banjo (as a musical instrument): 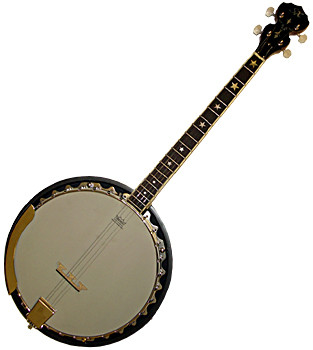 I hail from the Highlands of Scotland and this phrase has been in common use throughout my life. It was a favourite of my dad's. I'm 56 now so it's been around at least since the 1950s. Though, I must point out that, in front of my mum he always used the form backside rather than arse.

One of my young recruits amused me one day when I heard him exclaim to an old sweat who had missed the target completely, "Garn, you couldn't hit a cow's arse with a banjo!"

The only man left on the bench was Colcolough, who, some fans whispered, couldn't hit a bull on the backside with a shovel. He certainly couldn't hit today, for he struck out to end the game.

One gem was a confession by Chick Welles, who said, "I don't know what ailed me today — I just couldn't hit a cow in the behind with a snow shovel."

I couldn't hit a bull in the broadside with a scoop shovel. Ever."

All of a sudden courageous, he called after the departing planes: "You couldn't hit the broad side of a bull's ass with a spade, you slant-eyed bastard!

"You dumb bastards couldn't hit a blind ox on the rump with a scoop shovel." Andrew standing taut behind the wheel felt aghast. Three clean misses and the time lost was irretrievable. He tried to inject cool confidence into his command ...

Leo was along in years s ballplayers went; he couldn't hit the ide of an elephant with a banjo

At last Big Jim had refused to provide further ammunition, saying crudely, " Y' couldn't hit a cow's back with a shovel."

There are plenty of other early examples of things people can't hit with a banjo/shovel/spade, quite common are elephants, balloons, barn doors and nails.

Using Google's daterange feature, I did a search for pages dated 2000 to 2003 [1], and found the earliest verifiable mention of this phrase in a story in The Independent called My Side By David Beckham with Tom Watt dated 3 October 2003:

in a league where half the native players, to quote Dave Bassett, couldn't hit a cow's arse with a banjo

With more time and more refined searches you may be able to find earlier mentions of this phrase.