Word for ascribing computer-like mentality to humans/animals? (opposite of anthropomorphize)

I've been learning about the work of Buckminster Fuller and those he influenced, and at some points it seems like they simplify what causes people and animals to act the way they do to that of robots/computers. It feels almost like different (kind of opposite) version of anthropomorphism.

I'd be greatful for any ideas!

"When he simplified individuals into the mechanical parts of a universal system, Bucky seemed to [blank] them."

robotize - to turn a human being into a robot

I wasn't even aware it was an "official" word, but it's listed by Merriam Webster.

...at some points it seems like they simplify what causes people and animals to act the way they do to that of robots/computers.

Among researchers and academics, the term reductionism is often used to mean mechanical explanations of complex things (sometimes alongside "mechanistic"); while it's uncontroversial in physics and chemistry, in psychology, philosophy and social sciences it is a term often used by researchers when criticising overly mechanical and simplistic computational or "input-output" based explanations of animal and human behaviour.

Quick example (this is a snippet from a longer quote below):

Wikipedia's choice of illustration for their article is also rather perfect: 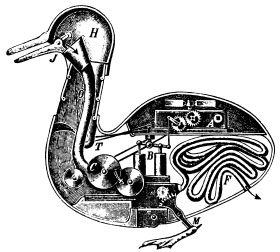 ...and they describe it as:

In the sciences, application of methodological reductionism attempts explanation of entire systems in terms of their individual, constituent parts and their interactions

Reductionism exists in all sciences; in physics, chemistry, etc it is pretty uncontroversial, and is generally considered a positive, standard practice. For example, Richard Dawkins coined the term "hierarchical reductionism" for the view that there's a hierarchy of levels of detail for explaining everything, similar to the popular view that every science can ultimately be explained by the next science down: psychology by biology, biology by chemistry, and ultimately, everything by physics (see also XKCD's satirical take on this):

When you reach psychology, animal behaviour, social sciences and philosophy, however, it starts to become not uncommon to see reductionism used as a dirty word for the over-simplification of complex systems and behaviour to un-nuanced computer-like explanations. Greedy reductionism has been coined as a term for cases where researchers leap to overly simplistic mechanistic explanations of too-complex phenomena too easily, shallow reductionism is another similar term; and it's not hard to find examples of reductionism being talked about as something people studying the behaviour of animals and humans are accused of.

From Instrumental Biology published by University of Chicago Press:

From the philosophical reception of... [genetics] ...in the early sixties until the age of genetic engineering, reductionism was gospel. Now, like 'positivism', it is a term of derision and abuse for a doctrine widely repudiated in the philosophy of biology.

Here's a good example of the term being used by researchers in the context of animal behaviour research as a term for (overly?) mechanistic/robotic explanations in this paper:

What is wrong with reductionist explanations of behaviour?

Methodological reductionism has served biology well, but its problems in the study of behaviour include turning open systems into closed ones... I will exemplify these problems in the context of the study of behaviour. But the worst problem arises when reductionism becomes an ideology, especially in the context of human behaviour, when it makes the claims to explain complex social phenomena (e.g. violence, alcoholism, the gender division of labour or sexual orientation) in terms of disordered molecular biology or genes. In doing so, ideological reductionism manifests a cascade of errors in method and logic: reification, arbitrary agglomeration, improper quantification, confusion of statistical artefact with biological reality, spurious localization and misplaced causality.

You'll seldom catch a self-respecting researcher using terms like "robotic" in a serious article, but that's not far from what they're getting at here. Here's one example from an introduction to cognitive psychology (my bold, also, I fixed a typo...):

...It has been argued that a weakness of the cognitive approach's reliance on the computer analogy leads to a reductionist and mechanistic description of experiences and behaviour. Reductionism is the idea that complex phenomena can be explained by simpler things. The cognitive approach often takes this narrow focus and ignores social and emotional factors which may impact on cognition. For example, the autism study investigated just one central cognitive deficit as an explanation for autism. However the reductionist approach does have strengths. An advantage of the reductionist view is that by breaking down a phenomenon to its constituent parts it may be possible to understand the whole. This type of single mindedness has lead to some great discoveries in psychology as it has in the 'natural' sciences.

Shallow Reductionism and the Problem of Complexity in Psychology

In his recent book The Mind Doesn't Work That Way, Fodor argues that computational modeling of global cognitive processes, such as abductive everyday reasoning, has not been successful. In this article the problem is analyzed in the framework of algorithmic information theory. It is argued that the failed approaches are characterized by shallow reductionism, which is rejected in favor of deep reductionism and nonreductionism.

If you're writing in an academic context, "reductionism" is a common term. If your sample sentence was in such a context, you might expect to see it worded like:

When he simplified individuals into the mechanical parts of a universal system, Bucky seemed guilty of a form of shallow reductionism

When he simplified individuals into the mechanical parts of a universal system, Bucky's view of people seemed too mechanistic

Most actual discussions of Bucky and reductionism I can find actually praise him for being less reductionist than his peers, in that his notion of synergy acknowledges that there are properties of complex systems that are not best measured as simply the accumulation of their parts. However, here's one example of a contemporary review describing him as reductionist:

What Fuller is engaged in is essentially a reductionism in which the basis of reality is events which are geometrical in nature. There are no things, no nouns of material substance. Synergetics gives us "the ability to identify all experience in terms of only angle and frequency"

Here's a suggestion for the idea of taking away human qualities - as you put it, kind of an opposite to anthropomorphism. It has a negative connotation.

You might consider technomorphization, defined here as "the reorganization of the organic based on the intelligent machine model".

It's not a dictionary word and this definition is a little different from what you want. But you could easily use it to mean something like "described or thought of as having the attributes of a machine."

It seems to be used in something like the way you want here (eighth link down): "a world where machines are anthropomorphized and where humans are technomorphized."

Here is an example sentence:

I can't find any official sources, but this word seems to fit (I logically made it up - as the process of becoming Automaton-like) - and on investigation, there is a few web-sources that use the phrase in the desired way:

"But it doesn’t seem quite right that there does appear to be a process of ‘automatonisation’ (becoming like a robot)" - See more at: https://www.mentalhealth.org.uk/blog/love-me-love-my-app#sthash.kF5fvvYI.dpuf

Bucky seemed to modularize them.

To modularize something (or a human being) is to design it (or to conceive of the being) as a part that fits into a larger whole. In respect to the person, idiosyncratic characteristics (which are often cherished in humanistic settings) are ignored in mechanistic settings. Individuating characteristics are played down and common characteristics are played up. The individual is adapted to the mechanism rather than the other way around. With modularity, the emphasis is on standardization in the service of interoperability.

12
Word for ascribing animal-like mentality to humans (opposite of anthropomorphize)
9
What is the opposite of "personification"?
8
Word for giving animal characteristics (esp. physical ones) to humans

3
What phrase is used for computer scan distortion like in funhouse mirrors?
12
Word for ascribing animal-like mentality to humans (opposite of anthropomorphize)
25
Word for "animals, including humans"?
0
Word or Phrase for a lack of "manual dexterity" (overall, including animals and humans)
29
A single word for non-domesticated animals that live among humans?
0
One word for computer Messages, Pictures and Videos
22
What is a word for ascribing divine characteristics to a machine?
0
Is there a word to describe the process of making animals scared of humans again?