I'm looking for an idiom or proverb that can be used for describing a situation in which someone's actions or behaviors are in favor of their opponents or enemies; in other words it seems that they are serving their enemies' or opponents' interests (usually unintentionally).

There is an Iranian proverb that says :

"To provide water for (turning) the enemy's mill"

This proverb mostly is used among politicians when they are accusing each other of giving advantages to the country's enemies, their opponents or the opposite parties.

It is supposed that a public election be held for choosing the members of the parliament on 26 February in Iran. Regarding the importance of this election, the supreme leader of the country has asked the politicians to stop using discouraging words or showing reactions that would lead people not to participate in the election. Because if the election is not recieved well by the people, it would be considered as a sign of their dissatisfaction from the current leaders and thus "would provide water for the country's enemies' mill".

What do English speakers use in this situation that can convey the same meaning?

I have come across this title " loading the gun of the enemy" in a website, but couldn't find it as a set phrase in available dictionaries. 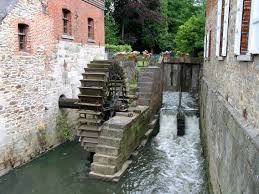 You could say they would be playing into the hands of the enemy.

to do something that gives someone else an advantage over you, although this was not your intention

If we allow terrorists to disrupt our lives to that extent we're just playing into their hands.

According to this source, the expression originated from playing cards, specifically the game bridge. The source gives nice outline of its emergence:

A part of the game’s strategy is to force your opponent to play certain cards. If you manage to do so, then she or he is playing into your hand, giving you an advantage. The expression is often pluralized into playing into someone’s hands. This slight modification has resulted in obscuring the origin of the meaning, making people think of a body part, when actually in card games your hand, refers to the cards you are holding. This meaning goes all the way back to the 16th century as well.

This idiom is very common in the UK, and is also often said with emphasis and pluralised as mentioned above:

played it right into my hands

Searching for the above on Google Books will give you plenty of examples of the use of this phrase in print.

give [sb] a stick to beat you with.

Example: If things go badly, you may be giving your opponents a stick to beat you with.

It may not be so common in AmE, but in BrE you can certainly...

(score) an own goal
something that someone does to try to get an advantage, but which makes a situation worse for them
Usage notes: In sport, an own goal is when someone scores a point for the opposite team by mistake.

ammunition: A means of attacking or defending an argument, thesis, or point of view. American Heritage® Dictionary

be (all) grist for someone's mill

grist for someone's mill: Something that can be used to advantage. American Heritage® Dictionary

In retirement, Gehlen bitterly complained, “For week after week the [Felfe] affair continued to hold the newspaper headlines: his character, his Nazi past, and his subsequent treachery were all grist for their mill, resulting in exaggerated reports. A Nazi Past

make it easy for someone

make oneself an easy target

make oneself a sitting duck

give someone a through ball

through ball: (Soccer) A forward pass which goes through the opposing team’s defense.

If you made it unexpectedly easy for an opponent to win, you "handed them victory on a silver platter."

In which case, their victory came "gift-wrapped."

Perhaps the most famous expression to this effect in recent U.S. history is the remark by Richard Nixon to David Frost in an interview conducted in 1977, speaking of his political enemies:

I gave them a sword, and they stuck it in and they twisted it with relish.

The resulting expression—"to give [one's enemies] a sword"—is not especially widely used in the United States, but the original quotation is widely remembered, and sometimes used in the same figurative way. Thus, Kate Michelman, Protecting the Right to Choose (2007) includes this passage:

He [Bill Clinton] continued to veto anti-choice measures, including the abortion ban, despite the [Lewinsky] scandal. And nothing about the situation justified impeachment, a grave step vastly out of proportion to the offense, however personally inexcusable it was. The right wing was dedicated to the personal destruction of President Clinton, but to paraphrase Richard Nixon, "He gave them a sword."

Relevant, but perhaps not completely on the mark:

To shoot oneself in the foot

"To do or say something that inadvertently undermines one's interests."

It misses out on notion of directly helping an enemy, but that can be taken care of by constructing the sentence well.

Your example infers that certain action would negatively affect voter turnout which would affect many people negatively but if you could speak in a collective sense, the people opting not to vote would be "cutting off their nose to spite their face".

The definition for this expression on UsingEnglish.com is:

" If you cut off your nose to spite your face, you do something rash or silly that ends up making things worse for you, often because you are angry or upset."

To "throw the game" is a similar idiom, though perhaps not conveying the exact meaning you want of being unintentional. It is a common phrase in sporting events and means intentionally making moves or plays to give your opponent an advantage, or to diminish your own, usually resulting in a win for your opponent.

Another phrase is ""to carry water for someone" or "to carry their water".

"To do someone's bidding; to serve someone's interests."

Not the answer you're looking for? Browse other questions tagged idiom-requests proverb-requests or ask your own question.

6
Idiom or expresssion for describing a situation that you can not reject a request easily
9
Idiom or proverb request for describing or criticising a situation in which the lowliest dare mock a mightiest who has become old
73
Idiom criticizing a person who has unsolved problems but tries to give someone advice about them
23
Idiom request for recommending someone to end their toxic relationship/ friendship with somebody
4
Idiom request for describing someone who is writhing in great pain
7
Idiom request for critisizing someone who ignores or overlooks their old things or friends, in an annoying manner, after having or finding new ones
31
Any equivalent to this Persian proverb “The yellow dog is the jackal's brother”?
2
Idiom for situation
3
A proverb for when one starts taking action after losing many times