The standard linguistic analysis of the NP

a box of apples

is that we have a determiner (a) which acts on (modifies?) box of apples. (For an example of standard analysis, see e.g. Fig. 6 here). CGEL refers to box of apples as a nominal, though I understand that others would prefer to call it an NP'. Then box of apples is further parsed into box being modified by of apples. In other words, we have 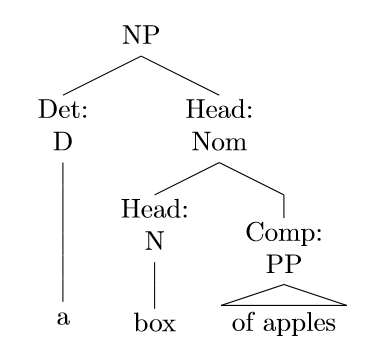 My question is: what is the evidence against the following alternative parsing: a box being modified by of apples? 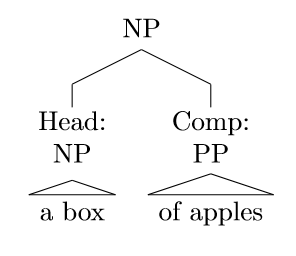 In other words, why does

What is particularly impressive (or surprising) is that, on the standard analysis, the parsing seems to be completely independent of context. It is simply never the case that a box gets modified by of apples; it is always box being modified by of apples, and then a modifying box of apples.

I hope it is understood that I'm only mentioning a box of apples for the sake of concreteness. What I would like to know is why such a parsing applies in all relevantly similar cases. In other words, my actual question is: consider an NP which is Det + Head + PP. Why is Det taken to modify Head + PP, rather than PP taken to modify Det + Head?

I'm sure there is more than one piece of evidence, and would appreciate it if someone could explain the first several strongest pieces of evidence.

(In contrast, I find the standard parsing far more intuitive in the cases of NPs which look like Det + Mod + Head, e.g. an old man. The correct parsing is, of course, an [old man], and somehow I don't have the slightest inclination to parse it as [an old] man.)

Update 1: found a page that seems to say something relevant on the issue: this one. Still digesting it...

Update 2: I have accepted the answer given by Greg Lee. (Thanks!) The answer uses the notion of a pro-form. A pro-form is a particular type of function word---"a word that has little lexical meaning or has ambiguous meaning, but instead serves to express grammatical relationships with other words within a sentence, or specify the attitude or mood of the speaker" (Wikipedia). For completeness, here are details (also from Wikipedia):

A pro-form is a type of function word or expression that stands in for (expresses the same content as) another word, phrase, clause or sentence where the meaning is recoverable from the context. They are used either to avoid repetitive expressions or in quantification (limiting the variables of a proposition).

Pro-forms are divided into several categories, according to which part of speech they substitute:

Now the answer by Greg Lee is easy to follow (some of the emphases are mine):

One generally assumes that only constituents can be replaced by a pro-form and that only a constituent can be the antecedent for such a replacement. So since we can go from

Once this answer was posted, it was easy to find other resources that discuss this; one of them is here.

One generally assumes that only constituents can be replaced by an indefinite pro-form and that only a constituent can be the antecedent for such a replacement. So since we can go from

It depends on what you're trying to say, but given the sentence

We have a box of apples.

It's quite obvious what we mean. We literally have a box filled with apples. If we examine the phrase "...a box of apples" in the sentence, the phrase's 'subject' is the box. We use a becuase we have one of the many boxes in the world. We don't have just one grand box (the box) and we don't have every box (every box).

Further, the detail about the apples isn't necessary. The apples are not the 'subject', so they are a detail. Details by nature modify an overarching something that can contain one or many details. The sentence is just as correct if you remove "of apples".

We have a box.

Of is a modifier similar to a. By that fact alone, the phrase "of apples" cannot stand independently and requires additional information.

Technically you can argue that a noun requires some kind of modifier to be used in a complete sentence. Proper English says

is incorrect. Even though the intent is obvious and technically a full coherent thought, it's not proper. The correct form is:

Want to buy a box (of apples)?

Which can be further corrected to

Do you want to buy a box (of apples)?

English itself was also built this way. Take something like gender expression. In other languages this can modify a word (El Niño vs El Niña). According to wikipedia,

Modern English is not considered to have grammatical gender, although Old English had it, and some remnants of a gender system exist, such as the distinct personal pronouns he, she, and it. However, aside from a handful of nouns like "god" and "goddess", "duke" and "duchess", "tiger" and "tigress", and "waiter" and "waitress", grammatical gender is almost exclusively found in pronouns and titles. Since they accurately reflect the biological sex of whatever they represent, with all male animate beings being assigned as masculine, all female animate beings being assigned as feminine, and all inanimate objects being assigned as neuter, English is said to have natural gender.

We don't generally modify words themselves depending on usage. We have other words do that job for us.

Not the answer you're looking for? Browse other questions tagged syntactic-analysis determiners noun-phrases constituents or ask your own question.

3
Are these PPs or non-finite clauses – or something else entirely?
0
Need clarification on noun phrases
1
Constituent structure of 'He arranged for me to go there'

2
Difference between an adverb modifying an NP consisting a single noun, and an adverb modifying a noun
2
What is and isn't a constituent, and how (whether?) can one argue that something is or isn't grammatical
8
In 'The hat is red', how do we know that 'is red' is a constituent?
1
In 'The hat is not red', how do we know that 'is not' is a constituent?
5
What is the head noun in a noun 'and' noun phrase?
2
How would you analyse the following sentence on the level of syntax?
0
superlative + relative clause
1
Constituent structure of 'He arranged for me to go there'