Is there an idiom or expression that refers to a person who has some unsolved problems and tries to give some pieces of advice to, or guide, others for solving the same problems?

We Iranians have a proverb that literally means

“If a bald man were capable of curing baldness, he would cure himself first!”

This sarcastic proverb implies that “...while someone is incapable of solving his own problems, he is in no position to guide others on how to solve the same problems.”

I have found this idiom "physician, heal thyself". Can I use it as an equivalent to that Persian proverb? (Although it seems that it focuses on "defects" rather than the "problems".)

Maybe this cartoon gives a better idea. (What is your first impression of that?) Are you ready to go to this dietician? :)

One might reply :"No, I won't. Because if he knew how to treat obesity, he would treat himself first!, as the idiom/ proverb says _____ ."

Actually, I'm looking for something that can be used in this sentence, too (as an equivalent for that Persian proverb). 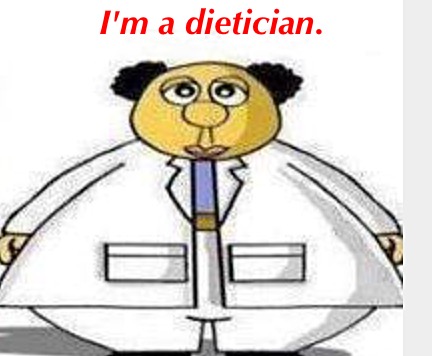 A similar idiom is: The blind leading the blind

It's used in a situation where someone who is incapable of dealing with a particular circumstance gives advice to another person in the same situation.

There is a quote from the New Testament Bible, Matthew 7.5

There is a clever proverb, dating back to John Ray's collection of 1678, that expresses a similar idea, from a very different direction:

Bachelors' wives and maids' [that is, childless women's] children are always well taught.

The idea ironically expressed here is that a person without any actual experience tends to imagine that a task that may in fact be quite difficult to perform well is instead straightforward and easy. A wifeless man and a childless woman who are very free with their advice about how to make a marriage succeed or how to raise a child properly are like a bald man who lays down the law about how to make hair grow—except that they may not be aware of their baldness.

But an even more suitable proverb might be one that doesn't exist:

Don't trust a dentist who has bad teeth.

That's because, whereas a bald man may have no control over his baldness, a dentist really ought to know how to preserve his or her own teeth.

The idea is, if a chef is a good chef, he can't help but eat his own food a lot and gets fat. Whereas a skinny chef doesn't make good enough food to tempt himself to eat it.

Obviously, while good teachers are capable and experienced in doing the work they teach, there is a cynical view that many who take up teaching a profession do so because they have failed to be successful in that profession.

And Shakespeare addresses it: "If to do were as easy as to know what were good to do, chapels had been churches and poor men's cottages princes' palaces. It is a good divine that follows his own instructions: I can easier teach twenty what were good to be done, than be one of the twenty to follow mine own teaching." - The Merchant of Venice, Act I, scene 2.

"The pot calling the kettle black."

Quoted directly from the from Wikipedia article-

As generally understood, the person accusing (the "pot") is understood to share some quality with the target of their accusation (the "kettle"). The pot is mocking the kettle for a little soot when the pot itself is thoroughly covered with it.

In response to your edit, I would think that "Physician, heal thyself" is perfectly applicable. I first heard it in context with an old Aesop fable. Here it is from "Aesop's Fables: A New Translation" by V. S. Vernon Jones:

"Once upon a time a Frog came forth from his home in the marshes and proclaimed to all the world that he was a learned physician, skilled in drugs and able to cure all diseases. Among the crowd was a Fox, who called out, 'You a doctor! Why, how can you set up to heal others when you cannot even cure your own lame legs and blotched and wrinkled skin?' Physician, heal thyself."

Taken like this,the idiom does seem to focus on "defects", but in a normal, day-to-day context it is fine to use it in relation to problems, as problems seem to be more common than defects.

For example, saying "Why are you asking Soudabeh? If she really knew how to have a happy married life, she wouldn't be in this situation now; as that old proverb says 'physician, heal thyself!'" is fine.

Look who's talking! or You should talk! or You're a fine one to talk!

(Informal) A phrase that you say to someone when they criticize or give advice on something they do (or are unable to do) themselves.

One common saying (or retort, really) that might be roughly equivalent is:

If you're so smart, why aren't you rich?

It's difficult to find a reference for this in the usual sources, but a web search shows there was a song released in 1951 and performed by Louis Jordan and his Orchestra named "If You're so Smart, How Come You Ain't Rich?" A recording of this song is available on YouTube.

Having an unhappy marriage (for example) doesn't necessarily mean that you don't know what it takes to have a good one, or that you have no right to give advice on the matter; it may just mean that you (or your spouse) have made mistakes that cannot be overcome. "Experience is the best teacher" is another saying that can be painfully true...

There is a self-explanatory proverb that fits perfectly:

Never trust the advice of a man in difficulties.

It is also mentioned in the book A Dictionary of American Proverbs (By Wolfgang Mieder, Stewart A. Kingsbury, Kelsie B. Harder):

Many sources say that the origin of the proverb is Aesop and Aesop's Fables is an important work which influenced English language also.

There is another proverb that might be used but it is not common:

When the rats want advice, they never ask the mice.

He should throw no stones, who lives in a glass house.

Which basically normally means "do unto others, as you would have them do unto you", however, it might also be interpreted "don't criticise others unless you are without fault"

The idea is very similar to your proverb: if they truly were a wise expert on marriage then they would have had a successful marriage, not a failed marriage that ended in divorce. However there is an added connotation that they might also be a bad counselor because they are bitter and sad about their failed marriage, and so their advice may not be the sort of thing which will guide you well. You may not want this added connotation.

Practice what you preach.
Do yourself what you advise others to do.

So you must be careful to do everything they tell you. But do not do what they do, for they do not practice what they preach.

It has a nice alliteration which can lend power to the idiom.

While quotes relating to specific contexts can be found among the few “Never take advice from … .” quotes out there (e.g., “Never take marital advice from a man who sleeps in his own room alone," from ‘Lizard Tales: The Wit and Wisdom of Ron Shirley’By Ron Shirley via Google Books),

it's also possible to find (or contrive) ones that would be context-neutral, such as

(from ‘Game Plan: The Definitive Playbook for Starting Or Growing Your Business’ By Warren Barhorst and Rusty Burson via Google Books)

or the slightly more "descriptive":

There used to be an old repartee that went like this: If You're So Smart, Why Aren't You Rich?

Seems quite similar to the bald man selling hirsute secrets.

It can also be reversed: If You're So Rich, Why Aren't You Smart?

The typical response in Italy when someone gives advice they clearly don't follow is:

(literally "what a pulpit from which to give a sermon!").

It's not as strong in my opinion, but appears to exist in English according to some dictionaries and titles:

You can always use a calque from Italian!

Practically speaking, topics such as marriage and politics would probably be avoided by spectators if the person clearly being hypocritical. But if someone was being hypocritical about something more mundane like, work advice, dating advice etc or if the people listening were (very close ) friends you might here the following very sarcastic comments:

As if you are one to talk, [because we know you did the same]

That's rich, coming from you, [because we know you did the same]

One that I notice is used, but isn't necessarily obvious why (these days) is:

If you have a woodfire stove, it doesn't matter if you are the kettle, or the pot, you will end up sooty from the fire (black). But it causes confusion in households where there is natural gas (no soot), or an electric stove or kettle (no fire at all)

I believe there is a Chinese idiom that goes: "Do not complain about the snow on your neighbour's roof, when your own doorstep is unclean."

It's been attributed to Confucius but hard to be sure.

"an auto mechanic's wife has the shittiest car"

"you're backseat driving, and your hands ain't on the wheel" -Judas Priest lyric

Not the answer you're looking for? Browse other questions tagged idiom-requests proverb-requests expression-requests or ask your own question.