What is the origin of the phrase “triple threat”?

"Triple threat" means things in different contexts. For performers, it refers to someone who excels at acting, singing, and dancing. In basketball, it refers to a person who has the option to pass, shoot, or dribble. When, and in what context, did this phrase originate? What was it first used to describe?

The earliest match I could find for "triple threat" is from "Cry of Calamity," in the Marietta [Ohio] Daily Leader (September 16, 1900):

When we add to this his [William Jennings Bryan's] declaration of war against Europe on behalf of Aguinaldo, if he should himself be inaugurated so that he and Aguinaido could both be presidents at once there is a triple threat of calamity and a multitude of lessons why the people should pursue the paths along which they have found prosperity.

Here "triple threat" seems to mean simply "three-part danger." The next batch of matches involve chess, as exemplified by the 1907 example cited in deadrat's answer.

The sports examples first appear in 1916–1919, and all three mentions from this period involve U.S. football. From "Football," in the Oklahoma City [Oklahoma] Times (November 16, 1916):

Shiverick of Cornell is being used in the same plays that Barrett took the ball in last season, and is showing promise of filling the shoes of last fall's leader. He is enough of an all-round man to cause the triple threat when he goes back in punting formation, and opponents have been unable to stop him thus far this fall.

From "Developed Men Needed," in the Richmond [Virginia] Times-Dispatch (March 5, 1917), quoting "E.B. Cochems, once mentor of the St. Louis University team, and a constructive coach":

"It is the ability to run, on combination with the ability to pass or to kick, that provides the all-important threat—a threat which tends to disconcert and to make any defense [v]ulnerable.

"Every open field runner must be back far enough to secure a certain momentum to make a zigzag course possible, and thus the very necessity for being back at least five yards plays into this form of tactics, which depends for success largely on a triple threat attack.

Princeton dropped the kicking game as its main weapon and in its stead adopted an attack of versatility and great possibilities—an offence which put great stress on the threat as personified by Trimble, a kicker, a forward passer and a great runner. It was this triple threat, with Eddie Mahan as the big figure, which demoralized Yale in 1915, and for a time on Saturday it surely shot Harvard to pieces.

It appears from these descriptions that kicking was a weapon because U.S. football still resembled rugby far more than it does today, with kicking serving as a way to move the ball quickly downfield. One very interesting source in that turns up in a Google Books search is a retrospective discussion of U.S. football going back to the 1880s. From Neilson Poe, "The Forward Pass," in Leslie's Illustrated Weekly (November 12, 1921):

In the early eighties a player had the possibilities of a dual threat, to kick or to run, when he went back in the kicker's position. Now a third and more dangerous threat has been added, with the coming of the forward pass. Every coach is looking for a back that possesses those three qualifications and a team without "The Triple Threat" is at a disadvantage when playing against an opponent of equal strength, but which has a back highly developed in the art of kicking, running an passing. That man must be watched constantly, and the threat is just as valuable as the performance, for while watching the dangerous man, other backs who have escaped the close attention given the star performer find it easier to get away, and plays worked up around these men are even surer of gaining ground than those around "The Triple Threater."

For the two following years [that is, 1915 and 1916] Mahan stood out as the greatest "Triple Threat" in football, and was the most dangerous man on the gridiron. With the three qualifications of the "Triple Threat" highly developed, he was also an accurate drop-kicker, and no team ever felt safe when Harvard had the ball within striking distance of their goal line.

According to this source, the forward pass became legal in U.S. collegiate football in 1906, meaning that there was no possibility of "triple threat" being applied to the sport before that year. From these instances, it appears that "triple threat" entered the sports lexicon through U.S. football, perhaps independently of its use in chess or perhaps influenced by that use. In any event, the notion of a "triple threat" consisting of three dangerous things seems to have existed—before either the football usage or the chess usage emerged—as a political idea, at least in Marietta, Ohio.

The earliest source I find for "triple threat" is The British Chess Magazine, Volume 23 (1907) describes (in the old notation) a possible move among several:

This is situational. (No board diagram is given, and I didn't check the text, but apparently the rook move to the knight's file threatens three opposing pieces.)

The first reference I can find to three separate talents (the OP's context) comes from The Princeton Alumni Weekly, Volume 21 (1920), discussing three players on the school's 1920 team -- Murrey (used as a substitute quarterback instead of as a "triple threat halfback") and Cleaves and Lourie, who are the best triple threats as long as Murrey is a substitute QB. It's clear what triple means from an earlier description of Lourie, who is

... a brilliant runner and passer. Against Harvard he also demonstrated that he is a very capable punter.

So the three football talents are running, passing, and kicking. The term required no explanation, so it's likely it was in use before it made the 1920 issue of the alumni weekly.

The OED Online mentions only the sense with reference to a US football back, that is, a back who can run, pass and kick. The earliest quote given is from a 1939 publication by W. H. Baumer, Sports as taught & played at West Point.

A search of "2,745,271 Newspapers — 2,779 Newspaper Titles" at Elephind suggests that the earliest uses in the popular press, aside from casual uses with reference to people who presented triple threats, were sport-related...but the sport was chess:

Black has a bad position, and it is difficult to point out any way of defending against White's triple threat of R to B sq, P to Kt 5, and Kt to K 5. This move gives White a chance of bringing off a very pretty combination, though it is not new.

This use suggests that the idiom with reference to a football back who can run, pass and kick is already established enough for the journalist to deem it unnecessary to explain.

In 1922, a use with a transferred sense, applied to three major players on a baseball team, appears in the New-York Tribune of September 30, 1922:

Later in 1922, a transferred sense with reference to football players appears in the Nov. 16 edition of the Brownwood Bulletin (Brownwood, Tex.):

A jocular use with reference to a baseball player appears in the Daily Illini, 1 December 1923:

In a 1925 farm journal (Wallace's Farmer), the phrase is applied to a type of cattle bred for "work, beef and dairy":

The transference continues with a 1927 reference to a "triple threat cinder path artist, offering the 440 and 880 yards, as well as the mile".

Later, 15 December 1927, a vague, nonspecific use with reference to a potential theatrical star appears in The Optimist (Abilene, Tex.): 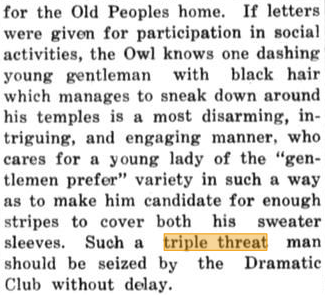 The nonspecific reference to theatrical abilities reappears in a Boston College publication, The Heights, 17 April 1928, along with an allusion to the football sense: 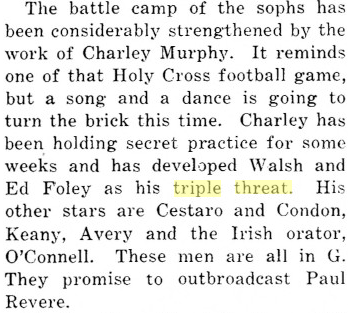 In the Daily Illini, 11 September 1930, the transferred sense is again applied to agriculture--this time soybeans, adaptible to "almost any kind of soil, climate and moisture". Here again, the football sense is clearly alluded to: 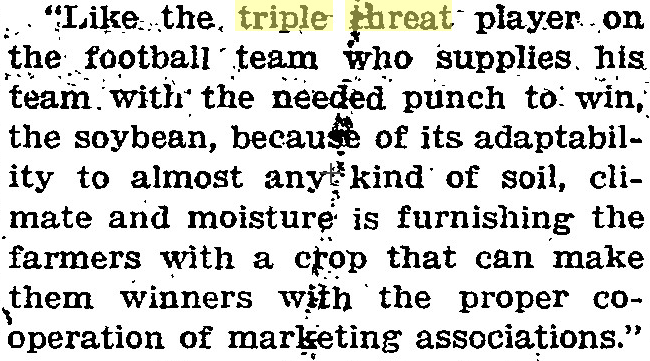 Uses in transferred senses proliferate in 1930-1939 (the latter date being the date of the first OED quote for the football sense): one refers to fencing (Boston College, The Heights, 12 November 1930), another is an ad boasting about variety, service and value (The Canadian Record, Canadian, Tex., December 11, 1930), and a third proclaims the US sweep of "the first three singles matches of the international women's tennis series" (Pampa Morning Post, Pampa, Tex., August 8, 1931). Others include a reference to a literary man (1931, "he writes poetry, love stories and more poetry"), bridge (1932, "misdeals, misbids and misplays"), a girl (1932, "she can hug, and kiss ... and darn socks"), amethysts (1933, in a South Australian journal), a track athlete (1934, a pole-vaulter, javelin thrower, and high jumper), and waiters as described by a dishwasher (1934, "stumble, fumble and grumble"), etc. All of these uses appear to derive from the use for football; they are embedded in a much larger multiplicity of uses with the specific football reference.

Not the answer you're looking for? Browse other questions tagged etymology meaning-in-context phrase-meaning origin-unknown or ask your own question.