What is a word for over-celebrating?

I am looking for a word similar to pompous or haughty. I thought of it for a while, and could not find a word that fit that description. It's also similar to tooting your own horn too much.

a ​slightly ​annoying ​form of ​behaviour, ​especially in ​sport, that is ​intended to ​attract ​attention or ​admiration because it is very ​skilful:

When he ​scored his fourth ​goal of the ​afternoon, we were ​forced to ​forgive his showboating and other ​antics.

Also parading. One of the definitions in American Heritage of parade is

For the sense of vainglorious boasting, with an upscale twist toward haughtiness, I like the verb

which dictionary.reference.com describes as an American coinage marrying blow (as in blowhard) and a Latin-like inflection. The source states that the word was favored by US President Warren G. Harding, for what it's worth.

Higher still on the scale is rodomontade, a word I keep on a special shelf for dispkay, and hardly ever take down and use. It's a noun, of course, and means bloviating, only a tarnation louder. Our friends at dictionary.reference.com offer this interesting history to this 17th century blast:

Got to love it.

› ​acting or ​speaking in a way ​intended to ​attract ​attention and to ​influence the ​opinion of ​people who are ​watching:

Experts ​criticized the ​program as ​mere grandstanding by ​corporations and ​local ​officials.

I believe you are looking for an adjective. Would vainglorious do?

Vainglorious people are vain, excessively boastful, and have swelled pride. The base word, vainglory, dates all the way back to the 14th century and means “worthless glory.”

You may say that he is beating his own drums, what means to brag or boast about your accomplishments or achievements. 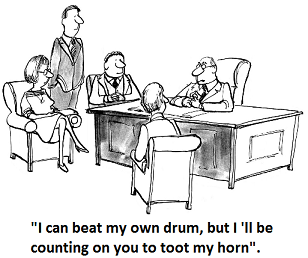 6
What is the origin of the phrase "to go apeshit"?

0
What's a better replacement for the word "enemy"?
3
Word for "overly proud of heritage"
0
Single-word metaphor that means "to be very bad at?"
1
A word for describing thinking of something as better
5
Word for employees without management responsibilities
0
Word for a solution that already exists but found the same solution by intuition
1
I'm looking for the word that says there's such a thing as using too much description
0
A word for raising your voice (not shouting/yelling)