An adjective for the condition of a used brush

What adjective best describes the weariness and disarrangement that starts to show in your toothbrush when you've used it for some time? Nothing severe; just a little out of shape: 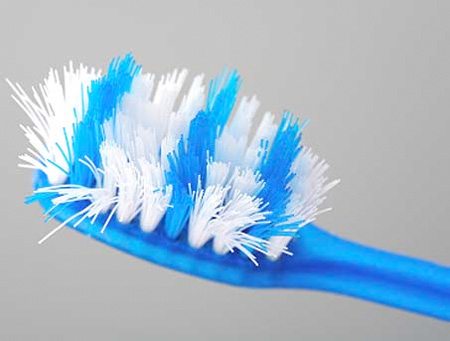 It doesn't have to be exclusively applicable to brushes.

"It is not very good for your teeth once the bristles are bent or frayed in any direction."

("How to Reuse Old Toothbrushes" at WikiHow)

Note: This adjective seems to be more commonly applied to the bristles than to the brush itself. For example, the image in the question could be called "an old toothbrush with frayed bristles."

Another more general adjective that people often use to describe brushes like these is worn (or worn out, worn down):

A worn-down and frayed toothbrush can't clean your teeth as well.

Lastly, a term I used while researching this question: old. With something like a toothbrush that deteriorates over time, the adjective old generally implies lower quality. This connotation is less strong for some other things such as wine that are considered to improve with age.

'Frazzled' is the adjective formed from the past participle of 'to frazzle':

American Heritage offers this speculation about the origins of 'frazzle':

[Perhaps a blend of fray and dialectal fazzle, to unravel (from Middle English facelyn, to fray, from fasel, frayed edge, probably diminutive of fas, rootlets, from Old English fæs).]

Here are some contemporary examples of the term in use:

On the counter was his frazzled toothbrush, while the soap had slipped into the sink.

(From "Welcoming Death", by Jake Teeny, in the January/February 2016 issue of The Saturday Evening Post. Emphasis mine.)

In order to earn pocket money, the girl has spent many past summers hunched over the bathtub with a frazzled toothbrush.

I would also suggest worn-out[ODO sense 2] which is applicable for toiletries (toothbrush, shaving brush, razor etc..), clothing or furniture but may not be for gradually rearranged class room chairs.

A slightly lighthearted word for this situation is dishevelled (def. 2).

My toothbrush has become dishevelled.

4
Activity/adjective for keep re-mentioning a favor
0
When people use words that have nothing to do with race to refer to race
7
Adjective to describe “just because… doesn't necessarily mean…”
1
Antonym for perfectionist
4
Single word for “to start earlier”
1
Adjective for serving as an example, validity of exemplative
3
What is an adjective that describes a group or event that you hated being a part of while you were in it but for whom you gain nostalgia afterwards?
1
Is there an adjective for “opportunistic” that lacks its connotation of amorality?