I'm trying to find the word that best describes the feeling when you feel like you're experiencing the same thing someone else has actually experienced?

Some less formal expressions I can think of: "I feel your pain." "I'm right there with you." "I know what your going through."

Depending on what you actually want to convey, one of the following may be appropriate: rapport, affinity, sympathy or empathy. Also look up the word "vicarious" as in "vicarious emotions".

"Been there, done that" is (or has been) a popular idiom to basically say that I have experienced what you are experiencing.

This article from phrases.org has the history as well as famous usages of the expression:

To have experienced the topic under discussion, to the point of boredom or complacency.

This phrase began life in the early 1970s, in the short form 'been there', which had the same meaning as 'been there, done that'. An early example comes from the American author Edwin Torres' novel Carlito’s Way, 1975:

The most commonly used form 'been there, done that' is generally regarded as an American expression. This item from the New York newspaper the Syracuse Herald-American, February 1982, which is the earliest version in print that I can find, puts that in some doubt. It's in a piece by Jerry Buck, writing out of Los Angeles, about actress Lauren Tewes:

"Miss Tewes, who has just got divorced, says she doesn't plan to get married at this time. Using an Australian expression, she says, 'Been there, done that.'

Despite that citation which places the origin in Australia, the first known use of it there dates from 1983. It appears in newspapers there in that year and is also cited in the Australian lexicographer Susan Butler's The Macquarie Dictionary of New Words, 1983, which implies that it was current in the language for at least a year or two prior to that publication.

been there, done that, got the t-shirtAbout a decade later 'got the t-shirt' was added for extra emphasis. An early citation is from Ski Survival, February. 1991:

"Knee Injuries. Rosemary Burns has been there, done that and got the T-shirt. She gives fellow sufferers her sympathy and sound advice."

Of course, it wasn't long before you really could get the T-shirt. Such T-shirts have become a favourite of alumni associations worldwide.

And, having begun adding to the original 'been there', there's no real limit to how far people will go with this phrase. A recent (August 2007) posting in the alt.music.pink-floyd Usenet Newsgroup claimed to have "Been there, done that, got the t-shirt, worn a hole in it and now use it as a duster."

The strange feeling that you have already seen or experienced something As I walked into the house, I had a strange sense of déjà vu.

I know that feel bro.

Having endured a similar experience as the person you are conversing with. 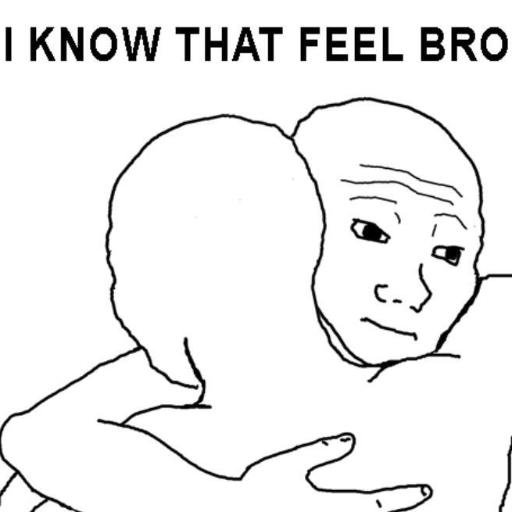 16
What do you call feeling what someone else feels?

2
Word for "knowing the feeling from X situation"?
4
Word for someone who when leaving a room makes it feel like someone has entered
2
Is there a word for when you hear ordinary sounds as being a part of or having the "feel" of music you were listening to?
2
Sadness over culmination/completion
1
What's a word for the feeling of fulfilling a dream?
13
What do you call something that makes you feel empty?
2
What is a word or some words to describe someone finding something else to do to not feel guilty about a bad decision that they know was wrong?
2
Is there a word for feeling like you have to do or touch something in a certain spot or you don't feel satisfied?