Ambiguity of "Dogs must be carried on this escalator"

In the words of the old joke, I wanted to go up to the next floor of a department store, and I saw an escalator with a sign saying

But I didn't have a dog, so I had to use the stairs.

Nobody is in any doubt about what was meant, but would you say the sign was ambiguous or (technically) mistaken? And if the latter, how should it be reworded?

The sign is not ambiguous because — as you said — everyone knows exactly what it means. Ambiguity can creep into the most precise and lawyerish of writing. The sign shouldn't be re-worded because it's a good sign. Its job is to tell people what to do, in as few words as possible, and it accomplishes that.

"Dogs must be carried on this escalator" can be interpreted in a number of ways.

The most salient message is that the escalator is dangerous for dogs, but you can't exactly write:

This escalator is also a dog skinner: hoist your pet when riding

Lift your dog or I will eat it, om nom nom — the escalator

Standing on moving stairs may cause brain damage in dogs

Don't put your dog on the escalator

This is a short unambiguous directive, and implies that people carry their dogs on escalators. I was thinking that perhaps "don't put your dog down on this escalator" would be clearer, but that just leads to a joke about not calling your dog fat while it's on the moving stairs.

You could tweak the original sentence to say "Any dogs must be carried...", meaning if you have a dog you must carry it. But if the real goal is to say "Dogs may not stand on the escalator", it would be clearer to say that:

Dogs are not permitted to stand on this escalator; carry them.

Why ambiguity is an indication of a healthy language

The truth is that the action of expressing something in any language has a cost. A cost in thinking how to put things into words and a cost in streaming these words out in oral speech or in writing.

So that just as everything else languages, tend to be simplified by their users. As Einstein would have put it, a language has to be "as simple as possible but not too simple".

The limit between the too simple and the just simple enough is precisely delineated by the proportion of ambiguity caused by every day simplifications.

The chicken example
Let's look at the verb to cook. To cook is an action verb that can be either transitive or intransitive:

2. The chicken is cooking

The second sense came as the result of a simplification in English. Most Romance languages instead have two distinct verbs: one for the cook, the other for the food.

But of course, nobody will imagine that there is a chicken in the kitchen with an apron tied around its waist and keeping itself busy with pots and pans. In this case English is less precise but more efficient.

The dog example
The same thing can arguably been said about the sign you mention. There are actually many possible far-fetched interpretations of the sign:

Dogs must be carried on this escalator!

For instance, nobody imagines that the poster addresses stray dogs and requests them to dutifully wait for some passing-by biped to pick them up instead of boldly venturing alone on the escalator. Nor indeed that people without dogs should opt for the stairs. That is precisely why the joke is intended to be funny.

It is instead a characteristic of signs that they need to comply with stricter concision in order to condense as much meaning as possible in as few words as possible when they fall under the casual gaze of by-passers; and since concision is borderline to oversimplification the risk of ambiguity is higher in sign talk than in everyday talk, let alone scientific literature.

So in my opinion the sign is not ambiguous at all. I'd argue that you really have to think about it to come up with non straightforward interpretations.

This sign might need to be rephrased. The following sentence for instance is shorter and not ambiguous.

Dog poo must be put in a litter bin.

The striking thing is that we've actually come up with the same construction as your sign; viz. "Dogs... must...". 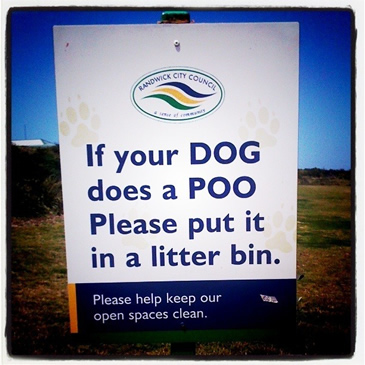 Others have explained that this kind of pseudo-ambiguity is quite normal. I will add some background on why it might be ambiguous and why readers will easily solve that ambiguity.

Of central importance is the distribution of topic and focus: some parts of a sentence contain information that is already known to the listener (topic), while other parts contain new, important, interesting information regarding the topic (focus/comment). This distinction is not always clear cut, but it is no less real. All pronouns have a certain topical aspect, because they refer to something that the listener will presumably be able to fill in: e.g. he knows who he is in a given context (if not, the pronoun is used incorrectly, which does happen).

Based on context, the reader has no problem determining that it is the word carried that has focus, not dogs or on this escalator.

Agrippina lives in Rome. Her palace is huge.

In the second sentence, the subject (her palace) is topical, the predicate (is huge) is focal. The sentence assumes that there is this palace that Agrippina lives in; but what it wants to tell me is that this palace is huge.

She craves power. But only men may be emperors.

In the second sentence, the predicate (may be emperors) is mostly topical: we were already talking about "power". The subject (only men) has focus, marked by the typically focal word only.

Which words have focus here? We have no explicit context to compare to in order to find "double", topical information. Nor is there a clear marker like only. But we do have implicit context.

I imagine our processing the sentence as follows. We read it. We picture someone carrying a dog on the escalator. Immediately it strikes us as interesting that this person should be carrying the dog, instead of its standing on four paws. Then we know what must have focus.

I'm rewriting my answer completely, as I've come up with a lot more solutions than I did when answering the first time.

The statement is definitely correct and ambiguous, but it has more than 2 meanings. It has 3!

If you have a dog and want to carry him to another floor, you must use this escalator. You cannot use any other escalator and it doesn't matter whether the dog is on the escalator or in your hands.

If you want to use this escalator with your dog, you must carry him. The dog cannot stand on the escalator, it must be in your hands.

If one were to rewrite this statement to disambiguate it, I believe these are the best options to retain:

Only those who carry a dog may use this escalator.

If you need to transport a dog, you may use only this escalator.

Dogs may not stand on this escalator, but may be carried in hands.

I think simply adding "all" to the front, making the sign read "all dogs must be carried..." implies that all dogs present must be carried and eliminates the necessity of dog ownership previously implied :)

There is an April Fool's joke on YouTube making fun of this ambiguity: http://www.youtube.com/watch?v=CqXTzZVTs5o

would be better as

When riding this escalator with a pet dog, it must be carried.

The former could imply that assistance dogs must also be carried when the reality for them on the Tube - staff can stop escalators (often the only method of transfer between levels) to allow such dogs to be walked.

The word 'all' provides some relief.

All dogs must be carried on escalators.

But carrying all of the dogs is hard as well.

The word 'any' is appropriate because it selects a situation for the rest of the sentence to act upon.

Any dogs must be carried on escalators.

But perhaps a complete overhaul would be more appropriate.

Carry your dog to avoid injury.

But is the injury to me or the dog? Does it matter?

Please keep your dog safely off the escalator.

You will have to figure out another solution: probably the best, because your dog might actually be too large to carry, like a labrador. Seems like the best solution to me.

I think the sentence is ambiguous as it is, because it might lead to just the conclusion you stated (if you don't have a dog, you can't ride this escalator).

Since the sentence uses the word "carry," I think the sentence is actually saying that dogs must be carried as opposed to simply standing on this particular escalator as it rides between floors. Perhaps it is safer for the owner to hold the dog than for the dog to stand where its hair or the leash might get caught between the moving steps.

Not the answer you're looking for? Browse other questions tagged grammaticality ambiguity or ask your own question.

7
"Gadhafi forces retreat" - how do you understand that?
12
BBC: "Man convicted of murdering his girlfriend and their 10-month-old daughter at Winchester Crown Court"