In the U.S., "All-American" can mean two things.

(1) It can be used as a general phrase, meaning simply clean-cut and middle class. "He's the all-American boy" is a cliché sentence.

Note, this usage has nothing at all to do with sports.

Note, it is sometimes (often?) used (today) somewhat derogatorily or at any rate sarcastically. (I have no idea if that was the case in earlier usage; maybe it was originally used straight-up.)

(2) In the world of U.S. college sports, it specifically means: "in that year, the Nation's best athlete, for that particular team position."

(To clarify: consider college football. You have the various positions (quarterback, kicker, etc). Imagine a hypothetical "dream team" of the single best quarterback, best kicker, and so on nationwide. A number of major media outlets each year decide on such a "dream team": those top college athletes are that year's "All-Americans in college football" (or, whatever sport).)

Regarding the the first use of "All-American" in the college sports sense: "Wikipedia" asserts with absolutely no evidence given that it was an 1889 article: it is associated with Walter Camp (a "father of Football" historical figure in the U.S.).

In contrast to All-American-1, All-American-2 is not used sarcastically, it's just used neutrally to mean "the best quarterback (kicker, forward, whatever) that season".

What I seek to understand

Jack Armstrong, the All-American Boy was a radio series between 1933 and 1951. Every use of the term I remember as a child would have referred to that radio show, even though it ended before I started listening to radio.

My understanding was that the show was incredibly popular, and it would frequently get mentions & audio excerpts in, eg, Abbott and Costello movies that were filmed in that era (and which ran and reran on TV pretty much 24 hours a day up until maybe 1965).

The earliest reference that Ngram finds is 1938.

But apparently the term "All-American" with regard to sport goes back further. The Michigan Alumnus from 1922 contains:

The most recent Michigan player to be honored by an All-American berth is Ernie Vick, '22, of Toledo, O., who was selected by Camp as center because of his playing this past season.

So apparently "All-American", in the sense of an outstanding sports figure, goes back to at least 1917.

And an issue of The Michigan Alumnus from 1902 appears to reference the same concept.

So I would link "All-American Boy" to the "Jack Armstrong" radio show, but the term "All-American" to earlier sports use.

From there I'll leave it to the sports fanatics to pin down the origin of "All-American".

Well, since no one else is doing it, here is the apparent origin of "All-American" in the sports sense:

The College Football All-America Team is an honor given annually to the best American college football players at their respective positions. The original usage of the term All-America seems to have been to the 1889 College Football All-America Team selected by Caspar Whitney and published in This Week's Sports in association with football pioneer Walter Camp. Camp took over the responsibility for picking the All-America team and was recognized as the official selector in the early years of the 20th century.

Note that the team is called the "All-America" team, presumably due to selecting the best players from across the country (*), but the members of the team were/are referred to as "All-Americans".

(*) Apparently even in 1899 there was dissension in the ranks as to whether the best players were being chosen, vs favoring those of the East Coast.

The origin of the expression is widely attributed to Albert Spaulding's 1888-1889 baseball tour to Australia. The tour featured games between Spaulding's own Chicago White Stockings and an all-star team of players from other teams in the league, a team he dubbed the "All-American Baseball Team." The teams played a tour across the United States from Chicago to San Francisco in late-1888, then played games in Hawaii, New Zealand and Australia, before continuing on to Egypt, Rome, London and points in between in early-1889.

Etymonline agrees with that origin. It at least explains why 1889 is so frequently given as the first date of usage.

When Caspar Whitney selected his first College Football All-America Team in 1889, he would have been very familiar with the term used by Spaulding, which was plastered across the pages of newspapers and magazines for months on-end from late-1888 through the spring of 1889. 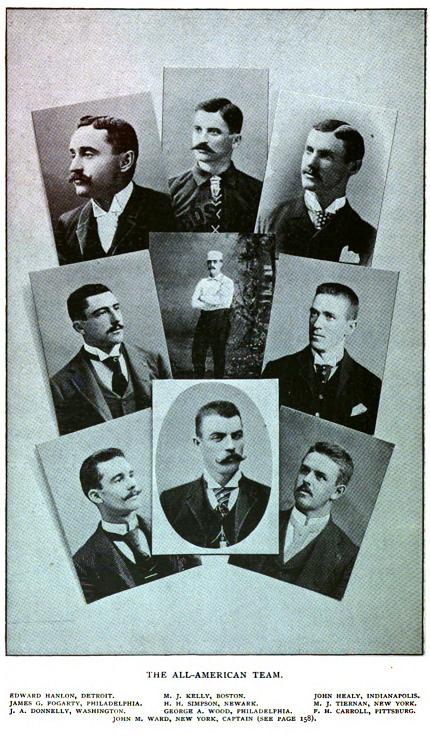 Not the answer you're looking for? Browse other questions tagged etymology american-english history or ask your own question.