When did the phrase "eat sh*t" enter the English Language?

I'm reading a book, The Known World by Edward P. Jones. It is a very well written book about Black slave owners before the Civil War, that is, freed slaves who went on to own slaves themselves.

The book is written with a lot of Southern and Black vernacular which I find very convincing. But I was really jarred on reading the following exchange in chapter 7:

“Where he say?” the man asked the boy softly.

“Georgia. Where your damn ears?”

The man touched both his earlobes at once and said, “Where they always been.”

“Well, act like it. He said Georgia clear as the damn day and you didn’t even hear him. You closer to him than I am and you still didn’t hear him.” For the very first time ever, Counsel missed the evenings with his family, Laura playing the piano, Belle reading to the younger children. Make up your mind, God, that’s all I ask.

“You can go eat shit, boy,” the man said. “Pick up your goddamn spoon and eat shit.”

I first heard that phrase as a teenager, and just assumed it was made up sometime shortly before or during my lifetime. Reading it in a book set in the mid-1800s felt like I had stumbled on an anachronism. I wondered when the phrase was actually first used in English (and thought, "I know the place to ask.")

Marginalia in illuminated manuscripts were sometimes very irreverent, and I have seen some with eating of feces depicted, so it seems entirely possible that this was not an unknown phrase. Also, Sir John Harington in The metamorphosis of Ajax: a cloacinean satire (1596) makes a punitive fantasy of coprophagia, in feeding "poore hungrie fellowes” "all the fat offerings" made in London's privies. So... it is possible that it's very olde.

I don't like vulgarity; please forgive me. I was just really taken by surprise by coming across the phrase in a very well-written book. I don't mean to bring EL&U down. But if Jonathan Swift can use the word in a poem, I think it's fair game here.

I restricted my search to 'eat shit', although I included that phrase with the variant spellings 'shite', 'sh*t', 'sh-t', and 's--t', where possible. I also included the various inflections of 'eat'.

A troublesome instance in Supplemental Nights, 1888 (R.F. Burton), returned from a search for 'eat shite', footnoted "to eat skite" (as meaning "to talk or act foolishly") in reference to text reading "devour ordure":

The OED Online does not give 'skite' as a variant spelling of 'shite'.

The earliest unalloyed figurative use I uncovered was from a novel titled The Folded Leaf, published in 1945. This text clip is the excerpt from Google Books results:

The next appearance was not visually verifiable, as it occurred in a "restricted rights" novel about life in the infantry, Toward an Unknown Station (Allan Lyon), published in 1948:

"You eat shit," Ben told him. "Goldbricking while I work my ass off!" We all helped him hide his cache, and then we settled down happily to wait for chow, thinking of the stolen feast we would enjoy later in the afternoon.

Regarding the appearance of 'shit' (absent 'eat') in print prior to 1900, J. Wright, in The English dialect dictionary, volume 5 (EDD), compiled a fair-sized collection of dialect uses from the 1600s through the 1800s, some dated. These are clippings of the primary entries: 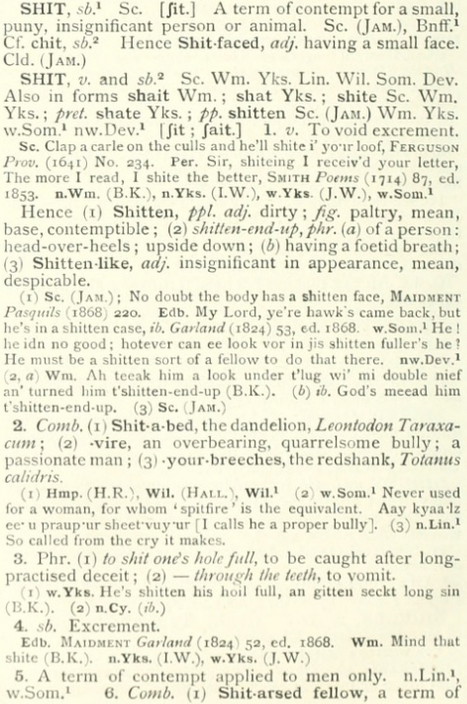 Nowhere in Wright's collection, neither in Volume 5's main entries nor in Volume 2's entries for 'eat', did I find the 'eat shit' phrase.

Eric Partridge, in his annotated 1963 edition of the third edition of F. Grose's A Classical Dictionary of the Vulgar Tongue (full text not available; the link is to the 1796 edition of Grose), provides a good summary of the use of 'shit' in the early 1900s. In the snapshot below this paragraph, Partridge's historical summary begins with "--In 1914-1918 ...", and his summary of the senses found in EDD appears after "--Dialect has many ...". The surrounding material in Partridge's annotation is based on information from the Oxford Dictionary (OD). 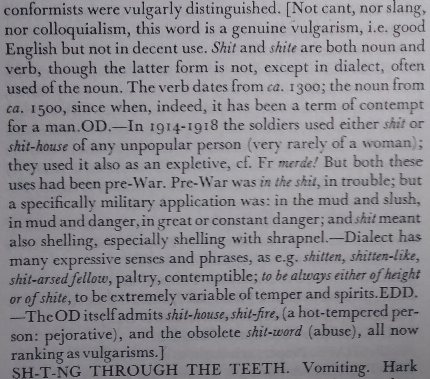 Regarding other negative results, the phrase 'eat shit' did not appear in my searches of

Of those, I could expect with a reasonable degree of certainty that if the phrase 'eat shit' had much currency in English prior to the 1900s, it would've been likely to appear in Farmer & Henley.

suggest that, with the troublesome exception of Burton's footnote, the earliest appearance in print of 'eat shit' may be the use in the 1945 novel, The Folded Leaf.

In print, people may not have been ordering others to eat shit before the 1940s, but the euphemistic expression eat dung is much older.

When a few days after the Rais (one of the mullahs who watch over the people, and have power to flog any one who does not observe strictly the Muhammedan religion) sent one of his friends to Stoddart and asked him whether he was an Eljee (ambassador) or a Sodagur (merchant)? Stoddart replied “Eat dung!”

His imprisonment upon this occasion the Nayeb passed over in silence, and continued, At last from fear, Stoddart said he would become a Mussulman, and according to the Muhammedan religion, if a person says he will turn Mussulman, he must either do so or die. He became a Mussulman and a short time after openly avowed again the Christian religion.

Other instances of “eat dung” appear in Isaiah 36:12, the excerpt dated 1808 describes what will befall Jerusalem if it were besieged.

From 1631, A commentarie upon all the Epistles of the Apostle Saint Paul, etc.

Only the feare of fornication is the cause of this grant. As if a man were directed to eat bread made of fine wheat flower, but being pinched with hunger through the want hereof, and so ready to eat dung, it were permitted to him (rather than doe so) to eat barley bread. And it is to be noted, that he faith not, Let every man marry a wife, but Let him have his owne wife.

Finally, if one looks at the etymology of dirt one finds that it originally meant excrement (probably the human kind) and the verb, to defecate.

The Dictionary of American Slang's entry for “eat dirt” says

To accept rebuke or harassment meekly; swallow one's pride; eat shit: I ate dirt and apologized to that bastard (1857+)

The two word phrase eat dirt was therefore a mid-nineteenth century euphemism for the more obscene shit, and the explicit dung; however its power to shock and offend has decreased over the years, and it is probably for this reason that the author Edward P. Jones substituted the chronological (but now tame) eat dirt with its more shocking, and taboo counterpart.

It goes without saying that eat dirt! can be taken literally and figuratively, and it needn't always refer to excrement—dirt also means "soil"—but it's worthwhile noting its peak between 1840 and 1860.

“ ... Begone! The ants shall gnaw your bones, and the vultures struggle for your flesh ! I curse you by the spirits of earth and of hell ! Your joints shall be rottenness, and you shall eat dirt like the worms !—Tremble, and begone !”

The expression appears to be from the second half of the 19th century.

But, as it's a fairly rude phrase, it's use, prior to the "let it all hang out" 60s, was probably rarely recorded on durable media, even if it was spoken with fair frequency.

(Speaking as someone born in 1949, I never got the impression that the expression was somehow "new". I had a fairly sheltered youth, but I did hear it on occasion.)

One does need to be a little careful about "sightings", though, as the words can appear in a context such as "I didn't eat shit for three days and I was incredibly hungry when I finally got to the camp."