Is there a term for a free ride without consent?

I think there should be a specific term for someone getting a free ride without consent, but I keep thinking of the word "hijack" which clearly isn't correct.

Examples include jumping on a train without a ticket, or riding without consent on the back of a truck. Or perhaps I want to sit in on someone else's meeting and just observe.

Am I gatecrashing? Or going along for a free ride?

Equally, if I hop on the roof of a train to get somewhere for free, is there a term for that?

a person who hides aboard a vehicle, ship, or aircraft in order to gain free passage

From Alexander Rein's The Blue Streak: A Hacker's Guide to Special Relativity:

In the UK at least, someone who rides public transport without paying for a ticket is called a 'fare dodger'

1 - A person who deliberately avoids payment for public transport

However this term does not apply to someone riding without consent on the back of a truck [or other vehicle].

"Watch out for Hop-Ons!"

Hop-ons are people who jump on to the back of the stair car for a free ride. They are a constant annoyance for the Bluth family members who must drive the stair car. (source) 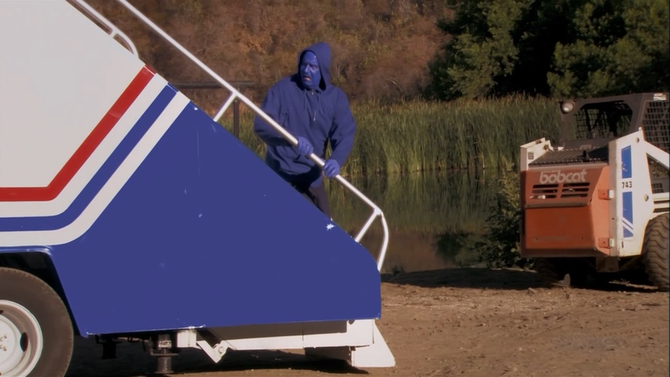 If your vehicle was towing a small cabin, you would of course need to watch out for Live-Ins.

This is a running joke from the TV series Arrested Development, but "hop ons" would be an easily understood term for the situation. You even used it in the question!

A free ride is a hitch:

There is an archaic legal term 'bilking' which can be used in the sense of using a service and not paying for it. It would not cover sitting in on someone's lecture, but it could be used for getting a free ride by not paying for a ticket.

Here's the definition from The Free Dictionary

n. a person who is supported by or seeks support from another without making an adequate return

When we used to grab onto the bumpers of unsuspecting cars for a tow while skateboarding, we called it skitching.

"Tagging along" to or "observing" (e.g. "I'm just here to observe") a meeting implies you have the consent of at least one person in the meeting.

Being a "fly on the wall" is another common expression, meaning someone observing a meeting or conversation without being part of it in any way (including any effects on the conversation one's mere presence would have).

Riding the rails was the term, especially during the Great Depression, for "hopping a freight" to obtain free (though dangerous) transport across country.

There were variations. "Trainhopping" was another general term, and riding the rods was the term for the even more dangerous practice of riding on the truss and brake rods under the car (vs riding in an unlocked boxcar or riding atop a car).

Fare dodging is the somewhat more modern term for dodging the conductor or ticket taker on a train or bus.

link to or take advantage of (an existing system or body of work). "they have piggybacked their own networks on to the system"

How about "tagging along", meaning "to go ​somewhere with a ​person or ​group, usually when they have not ​asked you to go with them.

This is not a travel metaphor, but in college we would call that an audit. You can audit a class which means you attend the class, but you don't get a grade or credit on your transcript.

Specifically applying to subways (and possibly other modes of public transportation) is turnstile jumping.

This refers to the act of avoiding paying at a turnstile, which is a gate which opens when you deposit your fare, by jumping over it. I couldn't find a definition but it's widely used in US newspapers

noun A person who illegally avoids paying a fare, as by entering a public bus through the exit door. Random House

fare evasion or ticket evasion is the act of travelling on public transport in disregard of the law and/or regulation, having deliberately not purchased the required ticket to travel (having had the chance to do so.) Wikipedia

As I am almost certainly the only person on this board who has ever arrested anyone for this activity, I can tell you with absolute certainty that in New York City, the legal term that the State of New York uses in the statute that describes this criminal offense is theft of services. The formal, but not the legal, term for the action (such as might be used in the press, or in a news release issued by the Transit Authority) is fare evasion, and a person who does not pay his required fare is a fare evader. The popular term universally used by police is "farebeating", while a person who "beats the fare" is a "farebeater." [...] I would consider "fare dodger" to be something those unfamiliar with the term might not immediately understand.

GreenWhiteBlue, January 14, 2009 - WordReference (emphasis is mine.)

Slang A person who attends a performance, sports event, etc., or travels on a train, airplane, etc., without having paid for a ticket, especially a person using a complimentary ticket or free pass. Random House

One who has not paid for a ticket M-W

On the other hand, if you overtly attend a meeting in order to obtain refreshments to which you aren't entitled, that's mooching, or simply stealing (or theft).

4
Word for attending lectures without seeking a degree

5
Term for piece of music without voice
1
Is there a short term for "without a date of expiry"?
3
Is there a word or phrase for the "log ride face"?
1
Synonym/more sophisticated term for free-flowing
10
Single word that depicts the fear of being secretly photographed/surveyed without consent
24
Term for a doorway without a door
0
Is there a context-free concise construction for "pertinently different from, without being mutually exclusive"?