I have a question in another sentence of the novel "To Kill a Mockingbird".

The sentence is in the paragraph below.

Being Southerners, it was a source of shame to some members of the family that we had no recorded ancestors on either side of the Battle of Hastings. All we had was Simon Finch, a fur-trapping apothecary from Cornwall whose piety was exceeded only by his stinginess. In England, Simon was irritated by the persecution of those who called themselves Methodists at the hands of their more liberal brethren, and as Simon called himself a Methodist, he worked his way across the Atlantic to Philadelphia, thence to Jamaica, thence to Mobile, and up the Saint Stephens. Mindful of John Wesley’s strictures on the use of many words in buying and selling, Simon made a pile practicing medicine, but in this pursuit he was unhappy lest he be tempted into doing what he knew was not for the glory of God, as the putting on of gold and costly apparel. So Simon, having forgotten his teacher’s dictum on the possession of human chattels, bought three slaves and with their aid established a homestead on the banks of the Alabama River some forty miles above Saint Stephens. He returned to Saint Stephens only once, to find a wife, and with her established a line that ran high to daughters. Simon lived to an impressive age and died rich.

Which meaning of the word "line" is used in the sentence "and with her established a line that ran high to daughters"?

Does "ran high to daughters" mean "gave birth to many daughters"?

Thanks a lot for everyone's help. I really appreciate it.

Line is a line of descendents, and "run high" is an idiom based on a river "running high," meaning with more water than usual (i.e. a higher, and probably more dangerous water line). It's much more typically used for intense emotions (as in the phrase "tempers were running high at the Iowa caucus") but in this case it means an overabundance of daughters --more, perhaps, than Simon (or his descendents) would have voluntarily chosen.

The noun line in your context means:

A connected series of people following one another in time (used especially of several generations of a family): 'Expert practitioners in Japan can trace their family lines back through 43 generations of Ikenobo masters'.

And it could be replaced with family line, bloodline or family tree

A set of ancestors or line of descent of an important person.

Your sentence in the context could be rephrased to:

He returned to Saint Stephens only once, to find a wife, and with her established a family (blood) line that had many daughters...

The below picture is a family line and if you have many daughters or sons, you would have a high or long line. 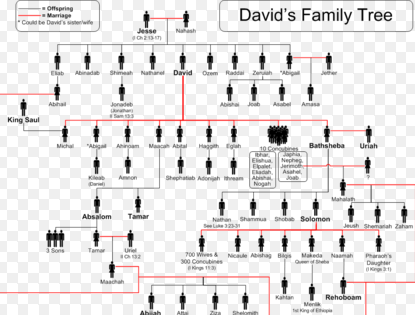 Not the answer you're looking for? Browse other questions tagged meaning meaning-in-context phrase-meaning idiom-meaning or ask your own question.