In the streets is still used universally.

As is out in the street.

The casual fan of Sir Arthur's writings will recall, of course, that Mr. Holmes and Dr. Watson lived in Baker Street:

...while Holmes, who loathed every form of society with his whole Bohemian soul, remained in our lodgings in Baker Street...

Here's a passage from a turn-of-the-20th-century American author, O.Henry:

They were seated where they had a habit of meeting—in the little, Creole-haunted café of Madame Tibault, in Dumaine Street.

Back to the story:

When, walking north on Sullivan, you reach the corner, you don't turn into Bleeker; you turn onto it. And the pub you've been looking for is on Bleecker, not in Bleecker Street. 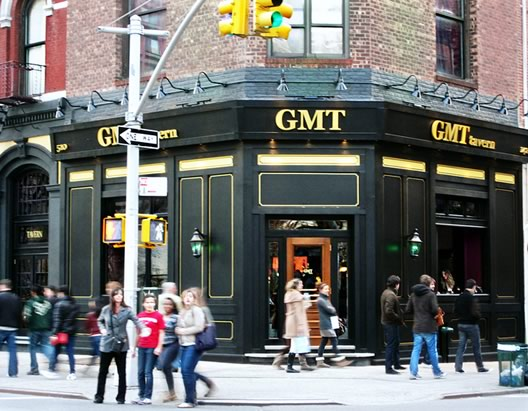 When did this happen? When did people start staying "on Bleecker Street"?

P.S. I hear that in the U.K. both prepositions are used. Really?

With @JDM's help, we've narrowed it down to sometime between O.Henry's career and the 1960's. I hope that eventually we'll be able to:

“Say, Joe,” was his greeting to his old-time working-mate next morning, “there’s a Frenchman out on Twenty-eighth Street. He’s made a pot of money, and he’s going back to France. It’s a dandy, well-appointed, small steam laundry. There’s a start for you if you want to settle down.

But, from the same book:

Few like me, I imagine, in the university pond. Sometimes I am fairly sure I am out of water, and that I should belong in Paris, in Grub Street, in a hermit’s cave, or in some sadly wild Bohemian crowd, drinking claret,—dago-red they call it in San Francisco,—dining in cheap restaurants in the Latin Quarter, and expressing vociferously radical views upon all creation.

Yes, I know that "in Grub Street" is a metaphor.

Getting closer. Theodore Dreiser, writing in 1925:

From The American Tragedy:

Finally, after a second hymn and an address by Mrs. Griffiths, during which she took occasion to refer to the mission work jointly conducted by them in a near-by street, and their services to the cause of Christ in general, a third hymn was indulged in, and then some tracts describing the mission rescue work being distributed, such voluntary gifts as were forthcoming were taken up by Asa--the father.

At the very last we know that people were saying "on Bleecker Street" in 1964 because that's the year that Simon & Garfunkel released their song "Bleecker Street," which contains these relevant lyrics:

A poet reads his crooked rhyme/Holy, holy is his sacrament/Thirty dollars pays your rent/On Bleecker Street

The first occurrences of "on Bleecker Street" in Google Books search results are considerably older than Simon and Garfunkel. From Supreme Court [of New York], The East New York & Jamaica Railroad Company against James H. Elmore (1874):

The following is a description of the mortgaged premises, herein-before mentioned: all that certain lot, piece or parcel of land, with the buildings thereon, situate, lying and being in the Ninth Ward of the City of New York, and bounded as follows, to wit: northerly in front, by Bank street, easterly, by Bleecker Street; westerly, by Hudson street; and southerly, in the rear, by the thereinafter described premises, containing in breadth in front, on Bank street aforesaid, eighty-seven feet ten inches, and in depth on Bleecker street, thirty-nine feet, on Hudson street, thirty-nine feet five inches, and about one hundred feet more or less in the rear.

And again in evidence entered into the record by the defendant's attorney, Frank Johnson, in Supreme Court [of New York], Aubelio Quarto against William Newman and John Newman (1905):

I know the Mills Hotel down on Bleecker Street. I know there is a high building there. I remember there being an organ grinder on the street there about the time of this accident, but he was far down, not the place where I was.He was not on the same side of the street that I was on. ... I was on the opposite side of the street from the side that the hotel is on. I went across the street to buy a package of tobacco. I was on the sidewalk at Sullivan Street and I was crossing the street in order to go to the other sidewalk where the hotel is—buy this tobacco. I was going to buy the tobacco near the hotrl in a tobacco shop there on Bleecker Street.

And again—finally in a piece of literature—from The Bradys' Bleecker Street Mystery; Or, The House with a Hundred Doors (1907), "by a New York detective":

Both man and child looked so out of place here on Bleecker street that the attention of the detectives was attracted at once.

"Governor, that's a singular outfit," remarked Young King Brady. "Can that be a kidnapped child?"

Examples of "in Bleecker Street," however, are even older. The earliest Google Books match is from "State of Religion in New York," in The Missionary Herald (May 1825):

...a peculiar blessing has been granted to the Orange-street church, which is about to change its location and occupy a new edifice for worship in Canal-street. The Spring street church, who are soon to enter into their new place of worship in Laight-street, has also partaken in the blessing. The colored Presbyterian Church is in an interesting state in respect to its spiritual interests; and a large blessing has been poured forth upon the Centre Presbyterian Church in Broome-street, and the Church in Brookline. A new Church has been formed in Bleecker-street under interesting auspices.

And from Margaret Askew, "The Conspiracy Acknowledged and Defended: In a Letter to the Rev. William W. Phillips, D.D." (1832):

He wished that I would not mention to any of the others, that I had seen him. I went to Bernard's house, but found his wife only within. In returning to my own house, I met Bernard and Margaret, and in a house in Bleecker-street, they signed the paper, and I administered the oath to them. ...

There are in this extract, two or three little points, in addition to those for which I made it—why did you appoint to meet my husband in the front of your house?—why did you slink around the corner with us, into Green-street, and why did you go into "a house" in Bleecker-street, to obtain the signatures, and administer the oaths?—why were not all these transactions conducted in your house?

And much later, from Junius Browne, The Great Metropolis: A Mirror of New York (1869):

"I lodge in Bleecker street" is a biography in brief. If he who says it be poor, the reason is apparent. If he be prosperous, his morality is questioned at once. And yet Bleecker street is respectable enough, if one have no insight into character and conditions.

The two frequency lines cross a few times between 1919 and 1947, but today the runaway winner is "on Bleecker Street." If I had to provide an approximate date in response to the question "At what point did more people say (or rather write) "on Bleecker Street" than "in Bleecker Street," I would say sometime in the late 1930s—but it seems quite likely that the change in written usage had to catch up with a somewhat earlier change in spoken usage.

(Note that I changed from using "Main Street", as shown in a comment above, to using "Oak Street", since "Main Street" is both the name of a novel and a generic name for "small town America".)

Note that the UK numbers got a bit weird around 1980 -- something changed (though perhaps this anomaly is due to the name "Bank Street").

(Update: Turns out that "Bank Street" was the name of a line of PC applications, beginning about 1980. That probably explains the anomaly.)

Not the answer you're looking for? Browse other questions tagged prepositions american-english or ask your own question.

22
ON an American street, but IN a British one. Do the twain ever meet?
2
In Vs On Vs At (when talking about streets)

5
When did “y’all” become improper?
11
When did the U.S. President become “Mr. X” instead of “President X”?
28
Why did “sceptical” become “skeptical” in the US?
22
ON an American street, but IN a British one. Do the twain ever meet?
17
When did people start “boinking”?
2
When did “I could care less” (rather than “I couldn't care less”) become popular?
6
When did “escort” become an euphemism for prostitute?
4
When did the word “home” become synonymous with “house”, in contrast to an apartment home or condo?