“Drink up”: lost in translation: how can it be regained?

Articles on this issue periodically appear in literary essays. There are pros and cons, and the issue lives on, unresolved.

sell [noun] and use the proceeds to buy liquor and get hideously drunk once or a number of times. 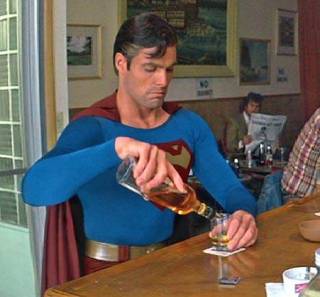 Do feel free to correct me if I'm wrong. I don't mind.

I'm further told that one can "[sell and use the proceeds, etc]" anything one can turn into cash quickly, including, but not limited to, one's estate, honor, faith in humanity, and one's sister's last pair of Parisian silk stockings.

Some translators insist on using the term "drink up."

I distinctly remember reading an article (it could have been a New York Times piece, but don't hold me to it) in which the author complained that, try as he might, he couldn't picture a man "drinking up his sister's stockings." Well, neither can I.

Here's what the OED has to say about the term so many translators resort to at the risk of being ridiculed:

to spend or waste (money) on liquor.

One commentator notes (indignantly, I would imagine):

It’s perfectly good English. There’s no need to replace it with a wordy explanation.

I (and a bunch of other people) beg to differ. To me, "drink up" means "finish the damn drink already, you stupid twit, we're about to miss the opening."

You can, if you like, read this lengthy and not very entertaining blog post on the subject; there are dozens of others, including a couple of racy pieces from the New York Jumping Times, or whatever. Most of them contain a lot of posturing and caustic asides, but not much else.

My question is ... is there a word or short phrase in English that would convey the meaning (as described above) without making the reader blink, raise his eyebrows and go, "Huh?"

Translation of literature is a difficult and subjective task. A translator is always balancing many ideals - clarity of meaning, flavour of the original, etc. - and often trying to translate colloquialisms for which there is no exact equivalent. Different translators make different choices about what words they use. Other translators sometimes disagree with them.

The phrase 'drink up' is valid English and does mean what the translator says. The OED is ample proof if that. It's a little archaic, but the Anna Karenina is more than 100 years old. Maybe the translator wanted to convey an archaic sense.

'Drink away' might be an alternative. I'm sure the translator was aware of it.

37
Collective word for food and drink
3
Need a word for having rewritten something after translation
6
English Translation of “Umay”
2
Translation of mathematical term
6
Correct term for having lost (not cut) one's hair
7
An artificially sweetened drink
4
Lost in translation… but lost in time instead?