Are there any "fake" French words used in English?

Are there any "fake" French words used in English? By "fake French" I mean words that are of French origin but are not actually correct French. This could happen if the word changes as it becomes adopted by English speakers. "Fake" may not be the best term for this -- if anyone can think of something better, please let me know. I mean French-derived terms that have evolved to the point of no longer being common-usage French.

Some examples of the reverse, i.e. "fake English" words used in French:

The word "fake" in my title might be confusing -- I'm not looking for words that are pronounced with fake French accents, but rather for French-derived words that have evolved to the point of no longer being common-usage French (or that were never used in French to begin with, the way the French word footing was never used in English).

This question was closed for being too broad; this edit is an attempt to narrow it down.

I'm looking specifically for words that (a) are used in English; (b) are derived from French; but (c) would not make sense to a French speaker, either because the word was never used in French in the first place, or because the French and English versions of the word have drifted extremely far apart.

An example of the reverse is "un footing" in French: "a footing" is complete nonsense in English, and it would be hard to even guess what it means.

Some examples of words that aren't what I'm looking for:

Yes, there's even two sections for different types of these in the Wikipedia article about French phrases used in English ("List of French expressions in English"):

I remember reading before that nom de plume is not idiomatic in French, where instead they use nom de guerre. However, it appears that nom de plume now exists in French as well (thanks to Basj for the correction), possibly due to influence from the English term.

Another funny one I vaguely remembered reading about is giclée, a neologism coined to make art printed using an inkjet printer sound fancier, but that has unfortunate connotations of ejaculation in French (it literally refers to a "spurt" or "squirt").

"Double entendre" is a fake term made of two real French words which is only understood by English speakers and has no real meaning in French:

One French word which has (perhaps amusingly) taken on a dramatically new meaning in English (esp. US) is douche:

First time I traveled to the US, I was quite puzzled by a "Patron Parking Only" sign outside a restaurant.

Patron evolved differently with one of it English meaning being customer while in French patron main acception is colloquial for manager, i.e. translates to boss.

I somewhat hesitated to risk parking my car to a space I thought was reserved for the manager use...

It is quite amusing to see that what used to be the Latin patronus has slightly evolved in English to finally mean client, while the latter precisely comes from the Latin clientes which was the exact antonym of patronus.

Another puzzling word I saw in the UK : some road signs show "Soft verge, keep off" or "Soft verge for two miles". That would be "Soft shoulder" in the US and Accotements non stabilisés" in French. "Verge" originally meant rod / wand in both French and English but the meanings highly diverged as nowadays, in French, the word is almost exclusively used as a non slang, medical term for penis / phallus.

As already answered by BlokeDownThePub raisins are French raisins secs but it happens also that Grapes, which comes from the French Grappe ( = cluster/bunch) are French raisins. That means "a cluster of grapes" translates to une grappe de raisin.

Once in the New Jersey, I saw a store likely selling pet stuff that was named Pet pourri, obviously a pun with "pet" and "pot pourri". Their authors were obviously unaware the pun was much more funny in French. While Pot-pourri means, I guess like in English, a mixture of dried flowers, Pet pourri means Rotten fart ...

I just found there are several businesses using that name in the US: a similar shop still in NJ, a web site, a grooming place in FL and even a nick name.

Not exactly a fake word but there is a serious difference in meaning with the French demande that sometimes lead to issues. A "demand" is an exigeance in French while the French demande is just a (polite) request. I have seen English speaking pissed off by what they thought was an arrogant behavior when unaware Frenchmen were "demanding" something while they really just ask for it.

English reservoirs are French lacs de retenue/lacs artificiels (it used to be réservoir too but that meaning has been lost in current French). French Réservoir is mostly used to express what is in English a Fuel (or any liquid) tank.

English concierges will eventually be named concierges too but currently, most French people are reluctant to call them that way because traditionally French concierges, essentially located in the ground floor of Paris area buildings, are what is called in English janitors/caretakers. Nowadays, these old style concierges have mostly disappeared though.

Parley - To treat, discuss terms; esp. to hold a parley (with an enemy or opponent), to come to parley. (OED)

This is a French word that has a different English meaning.

In BrE, as well as in French, "à la mode" means "fashionable". However, in AmE, it means "with a scoop of icecream".

Similarly, interpretations of entrée differ radically, meaning "starter" in BrE, and "main course" in AmE, and "entrance" in French.

petite in English is used as an adjective for a woman or girl that is both short and slender.

Whereas petite in French is the feminine of petit, which can be used both as an adjective and a noun for just about anything that is small (in size, scope, etc.), little, short, young (les petits; the little ones), or younger (petite soeur; kid sister); (le petit Dumas; Young Dumas: the Dumas' son.)

Je prendrai la petite; I'll go with the small/short one.

One interesting case is how chaise longue has long since evolved into chaise lounge in some usage in the US.

A couple words from western USA/Canada, left over from early exploration days:

parfleche - dry rawhide, or a container made from rawhide. In reality, it's not literally rawhide. It's slightly worked, but not tanned.

capote - a coat (historically, a hooded coat made from a wool blanket)

In French prune and raisin refer to plums and grapes in their natural state; in English they refer to the dried variety.

I suppose this is because in the old days it was the only way of preserving them for export.

Also there's sacre bleu and zut alors, both expressions of annoyance that nobody actually uses.

Something that crossed my mind is "Omelette du fromage". I don't know if it is used by English speaking people but I do know it is a well known phrase among some people. From Urban Dictionary:

The amazing phrase from Dexter's laboratory in the episode "The Big Cheese", when he listens to a French recording overnight to learn said language. This consequentially gets stuck on repeat, on this phrase. The next day all he can say is "omelette du fromage", actually working to his advantage in everything he does (except at the end, when his lab blows up).

Although meant to depict "cheese omelette", this phrase is grammatically incorrect. You should say "omelette au fromage", which means "an omelette with cheese".

Despite this, people still say the phrase "for the lols."

I think the term you are looking for is false friend, or in French, faux-ami.

False friends are words in two languages (or letters in two alphabets)1 that look or sound similar, but differ significantly in meaning. An example is the English embarrassed and the Spanish embarazada (which means pregnant), or the word sensible, which means reasonable in English, but sensitive in French and Spanish.

Some examples I can think off the top of my head:

Chef - anyone who cooks professionally in English, a boss in French

Ancien(t) - Something that is old in English, but in French, ancien can also mean "the ex-".

Bras - Plural of brassieres in English, the arms in French

Money/monnaie - Any form of negotiable currency in English, loose change in French.

When a country finishes with a score of zero, it is often referred to in English-language media as nul points, or sometimes nil points. The correct French for "no points" is pas de points or zéro point, but none of these phrases is used in the contest, as no-point scores are not announced by the presenters.

"Douze points" is also used, meaning the maximum 12 points one country can give another, but that is genuine French.

'Connoisseur' is interesting because it is 'fake' in two ways; the modern French spelling is connaisseur, and the French word refers to knowledge rather than appreciation.

Would "petty" count? Or has it been part of English so long that it has become an English word?

I would posit that in US English, Fillet qualifies as a Fake French word, merely due to how most people I have known from the US pronounce it (fɪl·eɪ rather than fɪl.ɪt).

For instance, the word partez is sometimes used (jocosely and otherwise) to mean party (the noun or verb).

Count de Monet is how a stingy person is sometimes referred to (to their face).

I recently made an attempt on ELU to introduce payage (for tollage). A long and intriguing discussion ensued.

There is plenty of French-like nonsense, mostly parodied, in the English and American literature. One example that springs to mind is Charlotte's "departez!" (she means to say "depart!") in Nabokov's Lolita. The same novel mentions our especial fondness of Ball Zack.

(Needless to say we're also fond of Bow Mar Shay, Flaw Bear, Due Mar, and constantly Parley Voo about various stuff going on in the province of Sham Pain).

Generally, it is the belief of all people worth speaking of that every educated person must speak English no matter where he was born; but every educated person who also thinks of himself/herself as intelligent must also speak French. It is, after all, the language of the cultured class. I'm almost not joking. 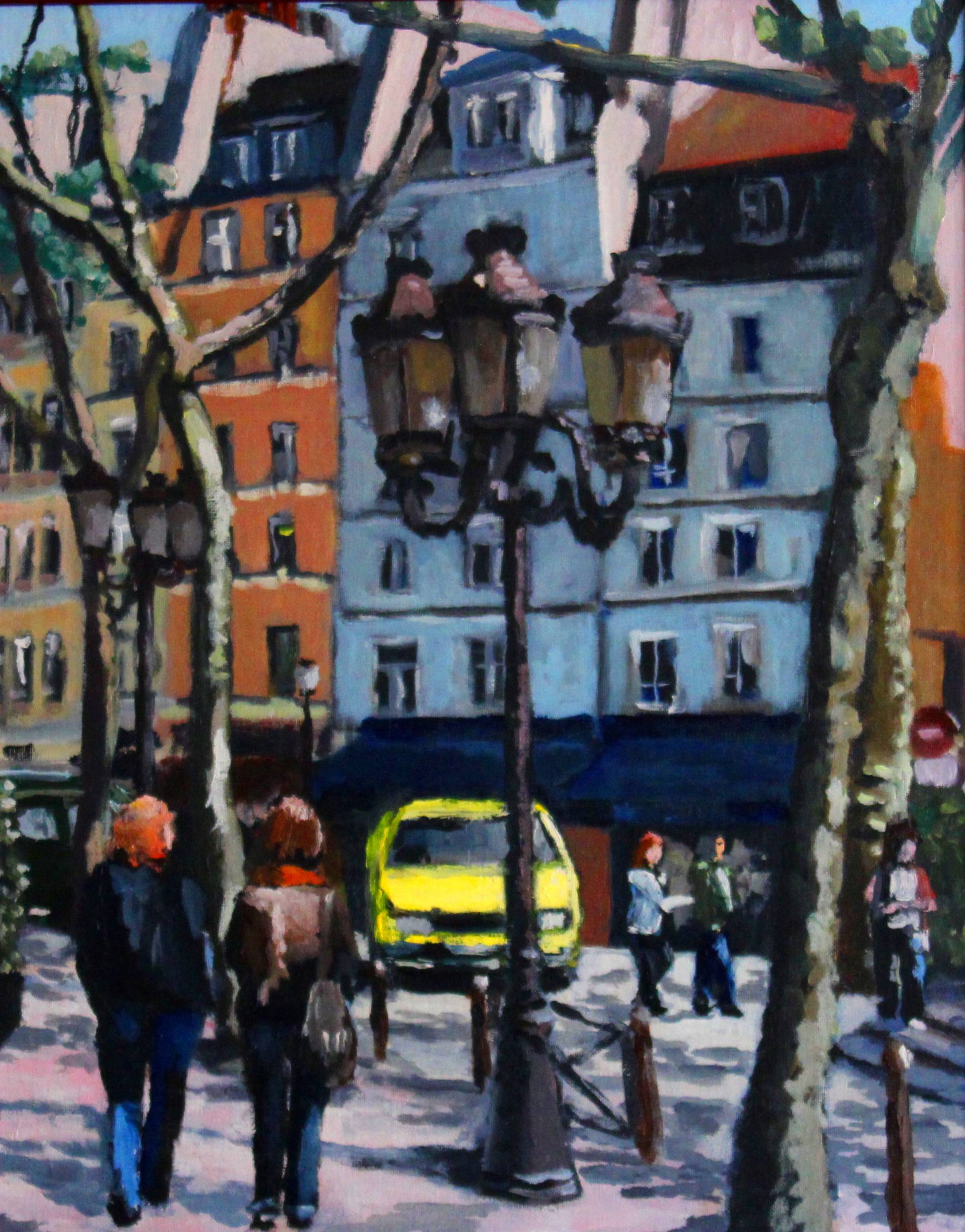 P.S. On @SevenSidedDie's request: t To those who don't get it (for whatever reason):

Of course there exist words as described and they are called loanwords.

From the British Library, we have:

"Loanwords are words brought into one country from another. Words are generally 'loaned' when two different cultures come into contact with each other. This might be because of immigration, trade, fashions or foods, travellers tales, the arts (paintings, books, poetry or film), technologies, wars or colonisation".

Complementing this thought we have in the Oxford Dictionary that loanword is "a word adopted from a foreign language with little or no modification".

Not the answer you're looking for? Browse other questions tagged etymology language-evolution french or ask your own question.

8
Are there religious swear words in English the way there are in French-speaking Québec (like “Câlisse!”)?
6
Pronunciation of foreign words by foreign speakers
15
Where are all the Latin words?
1
Does French past participle PRISE explain Modern English meanings of "comPRISE"?