Is there a specific term for the short descriptions of a movie or TV episode present in TV guides?

In TV guides, there are often short descriptions of movies or episodes of a TV series, like the one pictured here: 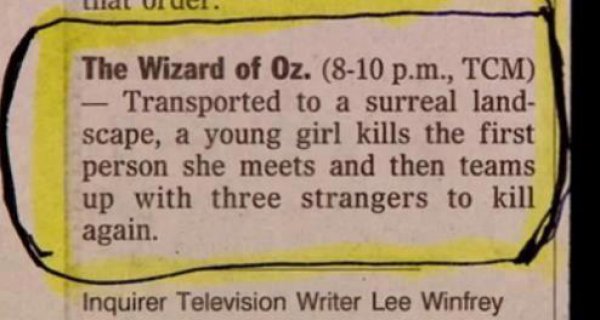 Is there a specific term for this kind of text?

It could be called a synopsis

3 a brief summary of the plot of a novel, motion picture, play, etc.

This is the blurb.

Originally the term used for a brief description of a book printed on its back cover to entice browsers to purchase it. The term is now widely used for short promotional descriptions of films, television programmes and other media.

It can also be called a log line. See this Wikipedia entry

A log line or logline is a brief (usually one-sentence) summary of a television program, film, or book that states the central conflict of the story, often providing both a synopsis of the story's plot, and an emotional "hook" to stimulate interest. A one-sentence program summary in TV Guide is a log line

The term many professional film critics and sub-editors use is capsule review.

A capsule review is a form of criticism, usually associated with journalism, that offers a relatively short critique of a specified artistic work (movie, music album, restaurant, painting, etc.). Capsule reviews generally appear in publications like newspapers and magazines, and can range anywhere from just a few sentences up to around 300 words. [...]

A fancier term would be précis (from MW):

a concise summary of essential points, statements, or facts

This deadpan*, humorous synopsis of "The Wizard of Oz" was written by Rick Polito, "penned for the Marin Independent Journal [Marin County is in northern California, just across the Golden Gate Bridge from San Francisco] and named by the LA Times as TV Listing of the Week when it was written in 1998."

The article goes on to say:

"Polito jokes with Jim Romenesko in an interview, 'That line is going to follow me to the grave. It was just on Leno, it was a clue in a crossword puzzle, it showed up in Playboy, and people use it as their email sigs. Someday I’m going to walk down the street and see it on a T-shirt and punch the person who’s wearing it.'”

The real question is, why are so many TV Guide and newspaper synopses also so deadpan and hilarious in their listings? At least we know Polito was intentionally trying to be funny, but what about all the others? Is the job of creating TV and movie listings so interminably boring that the writers have to throw in zingers like this in order not to lose their minds?

*A site called Educalingo includes this definition of deadpan:

Deadpan is a form of comic delivery in which humor is presented without a change in emotion or body language. It is usually spoken in a casual, monotone or cantankerous voice, and expresses a calm, sincere or grave demeanor, often in spite of the ridiculousness of the subject matter.

Not the answer you're looking for? Browse other questions tagged nouns terminology or ask your own question.