I recently saw the following image: 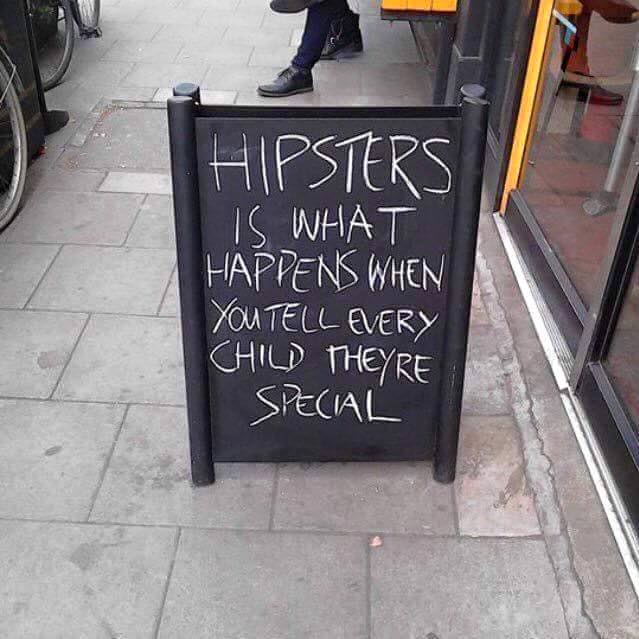 Hipsters is what happens when you tell every child they're special.

I saw many people comment on the fact that it should be "are/happen" and not "is/happens," but I feel like "is/happens" is correct in this case because it's referring to the phenomenon of hipsters, and not necessarily the people. Some people said it should have been "hipsterism" for it to be correct but I wonder if that's actually needed.

Am I wrong in my assessment? Is there a grammatical rule for this?

'Hipsters' semantically denotes a group of people and is plural. According to the rules of grammar, the verb must be plural.

But the word is being used in this sign to denote a phenomenon (hipsterism) related to that group of people. As such, it's an example of deferred interpretation.

Grammatically, it's incorrect. But we are able to glean the intended meaning.

Contrary to the the above answer, in the text the word "hipsters" semantically denotes the phenomenon of hipsters, as suggested by the originator of this string. Grammatically it is, of course, a plural. English allows words to take a verb corresponding to the semantic number rather than the grammatical number. This is especially the case with collective nouns such as "faculty" or "company". Indeed, in some cases to use the "correct" grammatical number would sound stilted. "The staff is waiting to meet you" sounds distinctly alien to the English ear. "The staff are waiting to meet you" is the normal English. In the days before the advent of pedantic English teachers it was evidently quite normal for a grammatically plural word to take a singular verb. Thus "small pocks" (or "small pox" in an older spelling) was used in the singular to refer to a disease, so commonly that we now scarcely recognise it as originally a plural. Note, by the way, that I write "small pocks....was", not "small pocks....were". Semantically, the phrase "small pocks" in my sentence denotes the term, not the pocks themselves. Thus, in accordance with normal English practice, I use the singular construction, as the writer of the notice on the blackboard did.

Not the answer you're looking for? Browse other questions tagged grammar verbs or ask your own question.

4
Is “either you or [third-person]” followed by a singular verb or a plural verb?
2
Which is more appropriate: Watch out/Be careful you are going to fall OR you will fall?
2
The origin of the verb “has” (the verb “have” for third-singular person)
0
Looking for name of rule regarding indefinite article
0
Why does the verb sometimes change when we go from declarative to interrogative?