A verb for someone who isn't really listening

I've been asking everybody I know about a verb that has been stuck on my mind, but I can't find the right word.

I'm looking for a verb for someone who listens with reluctance. For example, I'm talking about something that happened to me, but the listener simply agrees that everything I say is true. In other words, suppose someone is busy using the computer, not knowing that they're busy, I start telling them about something that happened to me; however, they don't stop me from talking so as not to hurt my feelings, nor do they ditch me. They nod their head and say for example, "Oh" or "Really?"

I'm looking for a verb to fill the blank:

Me: telling a story

Someone: "Oh"
Me: continuing the story

Someone: "really"/"nice" / or any meaningless response.

Or the other way around:

You don't have to humor me.

You don't have to be polite / I'm just being polite

(polite - courteous, behaving in a manner that is respectful or considerate of others; well-mannered (OED))

be listening with half an hear

listen with half an ear

: not give one’s full attention.

Midori watched the room warily, only listening with half an ear as she scanned the crowd.

‘Oh, my, this is interesting,’ said Maria, who had been listening with half an ear until now.

As they walked off to start their shift, Janey was listening with half an ear to Debi's jabber.

Chase seemed to be half-listening to the woman, answering in monosyllables—while Dixon was visibly lusting over him. (Dreams of a Dark Warrior)

The word you are looking for is an aspect of hearing called selective listening.

Hearing is a physiological process which requires only the proper functioning of the hearing apparatus, which includes the outer-, middle-, and inner ear. See the picture below. 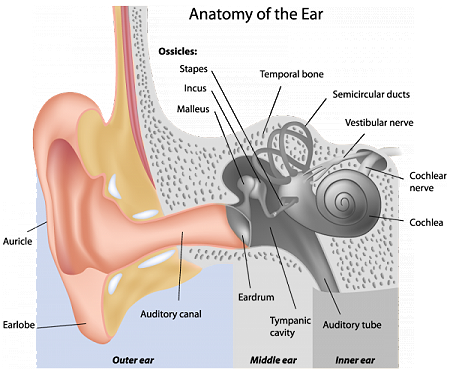 When sound is received at the inner ear, cochlear nerve fibers are stimulated and send electrical impulses to the auditory cortex in the temporal lobe of the brain, where with the help of several feedback loops along the way, sound is divided into non-speech and speech components.

When a person is simply hearing you, they are short-circuiting, so to speak, the more complex process of speech interpretation. We call that short-circuiting process selective listening. A teenager, for example, may hear his mother not once but several times asking him to take out the garbage, but because of selective listening the mother’s message does not get processed completely. Hence, the message is not acted upon, or obeyed.

Similarly, when a coworker or friend is yammering at you while you are doing something else which requires a fairly high level of cognitive functioning, you can choose to filter out the speech content and its meaning so as to be able to continue what you’re doing.

What the speaker who is being “tuned out” needs to do at that point is to get the listener’s full attention, and then with eye-to-eye directness arrange to talk at another time and/or place so that effective speaking and listening (i.e., communication) can take place.

As defined in Wikipedia