Can “dystopian” be accurate for artistic works based largely on truth?

For example: It seems to me a bit sketchy to categorize the movie The Lives of Others (2006) as such, even though it is a work of fiction and set in a negative world - - because it is largely based on East German surveillance that really happened.

Likewise, it would seem ~any~ [art loves to find cracks] possible historic, artistic permutation of Nazi Germany can't really be accurately called “dystopian”. (Unless it turns out Nazis hid on the dark side of the moon and re-take the world, if you follow my general drift.)

As I understand it, utopia is by definition an imaginary ideal. Does/should the subsequently minted dystopia have the same general exactitude?

So, we should not be hearing about “dystopian” novels and movies set in the present or past unless they are set in an imaginary alternate universe.

Am I completely wrong in this understanding? It seems to me people just fluff the word “dystopia” towards any work with a negative unlikable society.

Note: I'm specifically talking about the context of categorizing novels, plays, and movies. I'm sure that there are news articles talking about “dystopian” drone attacks on civilians and the like. These seem like melodramatic exceptions that prove the rule, so to speak.

While your objection to the use is clear, and while my sympathies lie squarely with any objection to the weakening or dilution of dystopia's force, any novel or movie that pertains in any way to 'dystopia', may legitimately be described as 'dystopian'--however little we may like that use of the term.

'Dystopia' was apparently formulated on the model of, and in contrast to, More's post-classical Latin term, Utopia. The earliest use I could find of 'dystopia' was this from a poem titled "Utopia", published in 1748: 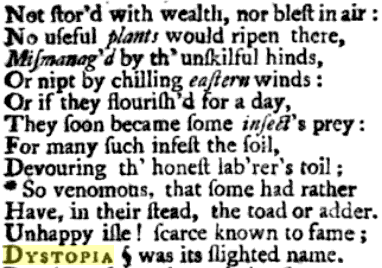 The poem quoted, being satirical, does not mistake the sense of Utopia, and uses 'Dystopia' in a similar way, as the name of a 'no place' with bad qualities in contrast to the good qualities manifest in Utopia (according to the narrator of that work).

Utopia did not mean, however, an ideal, imaginary place having "a perfect social, legal, and political system". Such is how the unreliable narrator of More's satirical De optimo reipublicae statu, deque nova insula Utopia (1516) presents Utopia, yet the meaning of Utopia was 'no place' or 'nowhere'. Utopia does not and did not exist.

By the 1800s, however, 'utopia' had taken on a new meaning, partly by conflation with 'eutopia' as the opposite of 'dystopia':

b. A real place which is perceived or imagined as perfect.

In contemporary use, 'dystopia' conveys the opposite of the contemporary positive sense of Utopia. It draws this opposition in part from the long-standing conflation of 'utopia' and 'eutopia': 'dys-', meaning 'bad', is opposite 'eu-', meaning 'good'. Thus, 'dystopia' may be understood as 'bad place', 'eutopia' as 'good place', and 'utopia' as 'no place' but also as 'good place' by a largely mistaken association with 'eutopia'.

The circumstances described in the preceding paragraphs weaken any argument that might be made against the casual use of 'dystopia' (and so 'dystopian') to describe a possible place, state or condition, however imaginary that place might be. That weakening is aggravated by 'eutopia' having, historically, been used with the sense of a possible place:

A perfect (imagined or hypothetical) society or state of existence; a place of supreme happiness. Also: a literary work describing such a place; a vision of an ideal state of existence. Cf. utopia n.
In early use sometimes distinguished from utopia in being a possible, rather than purely imaginary, place of happiness (see e.g. quots. 1556, 1610). Now chiefly used synonymously with utopia, though sometimes used to emphasize the positive nature of the imagined state or society, with reference to the sense of the ancient Greek prefix....

The word dystopian came into general use in the 1950s to describe the post-war fashion for novels describing societies that were deeply flawed such as Aldous Huxley's Brave New World and George Orwell's 1984.

The OED definition refers to dystopia as an imaginary place or condition in which everything is as bad as possible.

An example from 1968, however says: 1968 New Scientist 11 July 96/3 It is a pleasant change to read some hope for our future... I fear that our real future is more likely to be dystopian.

It is applied to the real world, but always, one senses, with reference back to conjure the fictional nightmares envisaged by the likes of Orwell and Huxley. So I would say, by all means, use it to describe appalling circumstances (Syria today? Cambodia under Pol Pot?), but expect it to be understood with reference to Brave New World and 1984 etc.

The OED does have an example of the term dystopian from 1868. It would appear to have been coined originally by J.S.Mill, who seems to have used it in Parliament (the record is from Hansard) as an opposite to Utopian

1868 J. S. Mill in Hansard Commons 12 Mar. 1517/1 It is, perhaps, too complimentary to call them Utopians, they ought rather to be called dys-topians, or caco-topians. What is commonly called Utopian is something too good to be practicable; but what they appear to favour is too bad to be practicable

Utopia - the ideal society was conceived by Thomas More in his novel of that name, published in 1516.

1
Accurate definition for poetic devices
2
Word for politicians truth, really a lie
0
Is the term “tooltip” for the upvote and downvote button on StackExchange accurate?
2
Can you tell the truth while saying a false statement
1
Can I use “traits” for “features”?
0
Can a faculty be based on area1 and area2?