Richard Dawkins recently informed twitter that the OED has registered Glen Greenwald's last name as a transitive verb and assigned the following definition to it1:

To misrepresent a more intelligent person's superior argument, typically on social media in the form of poorly written material under the guise of journalism.

My question is this: from what writing or writings of Greenwald's did his surname inherit this unfortunate registry into our lexicon?

Also, can someone provide an excerpt or a sample or article of someone greenwalding a more intelligent argument?

My problem is the umbrella term of misrepresent which, or course, includes the semantics of malice and intention in this case, but I think could include the dangers of paraphrasing or simplification. Either way, I would like an excerpt or full length article of someone doing this.

Also, dear readers, I would very much appreciate your feedback.

The incident that started the Dawkins / Greenwald beef on Twitter was when Greenwald tweeted an article that insinuated bigotry on Dawkins' part for agreeing to debate cardinals, rabbis, etc, but refused to be interviewed by a Muslim journalist. (It had nothing to do with bigotry on his part.)

Also notably, Glenn Greenwald has been engaged in a campaign of character assassination against Sam Harris over the past couple of years. He has endorsed and retweeted quotes and articles that call Sam Harris an "Islamophobe", a "racist", a "warmonger", and a "genocidal, fascist maniac", although he seemingly knows these are misrepresentations of Sam's actual views.

Glenn also employs writers at his publication 'The Intercept' who engage in morally questionable behavior; most notably in recent history, Murtaza Hussain, who called Maajid Nawaz a "porch monkey", "talking monkey" and a "native informant". (Nawaaz is a former radical Islamist, now liberal and secular Muslim, who co-authored a book with Sam Harris titled "Islam and the Future of Tolerance".) 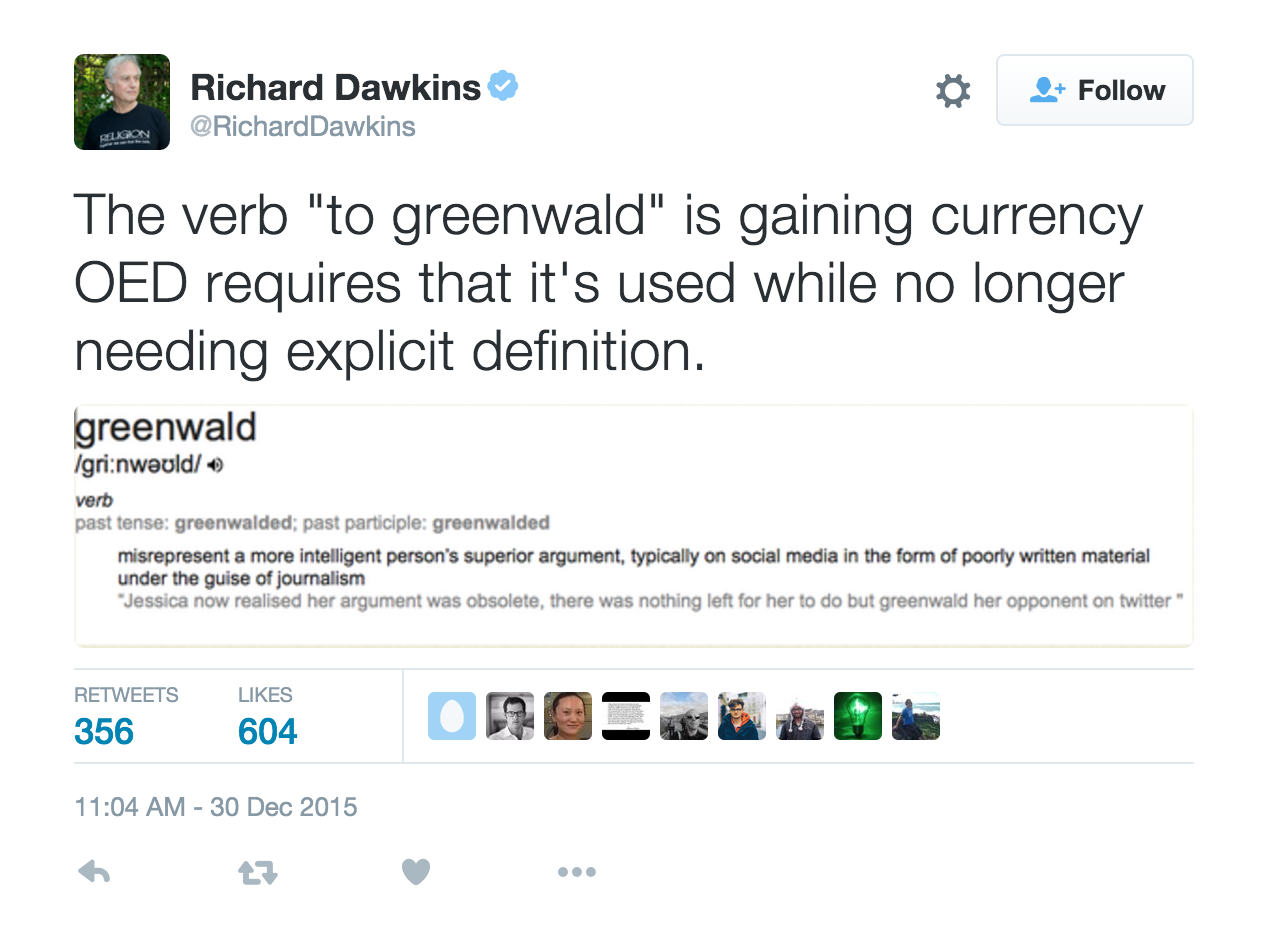 Dawkin's screenshot of a dictionary definition has been entirely falsified.

Not the answer you're looking for? Browse other questions tagged meaning verbs or ask your own question.