What is “large sort”? [closed]

Can anybody help me describe this word?

The American ambassador in Berlin described him as "a very jolly, large sort of German".

(the author is talking about Arthur Zimmermann)

Arthur Zimmerman was the German foreign secretary during World War I. "Jolly", meaning good-humored and cheerful, is meant to be an ironic contrast with his machinations in world affairs. "Stout" means large and portly. And that's the sort (kind) of German he was. Here he is, on the right: 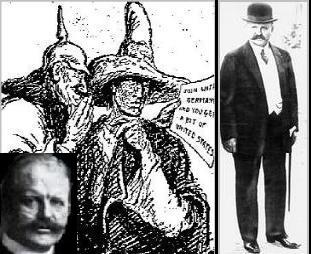 (He is lampooned on the left, wearing a helmet, talking to a Mexican, wearing a sombrero, because of his scheme to get Mexico to attack the US, which thus distracted, he hoped wouldn't join with Germany's enemies in the then ongoing war in Europe.)

In this sentence, "large" and "jolly" describe the type (sort) of person that Herr Zimmerman is.

3
“Did it go down your *muffler*?”
2
What is the meaning of “she can be obtuse”?
1
Can “good” and “well” be used interchangeably?
0
An easier way to describe the phrase “people relevant to my current situation”?
0
What does “'Avoid plastics' in commencement speeches" mean?
3
Question about a sentence from the novel “Possession”
0
What did “Aryan” mean in the 1930s?
0
Meaning of “for the meek”