When did it become correct to add an “s” to a singular possessive already ending in “‑s”?

According to my grammar book, but at variance to the answer to this question, the correct singular possessive if a word ends in ‑s is:

The grammar book allows exceptions for historical nouns, so the examples in the answer to the above-linked question would pass muster.

However, I’m sure that I learnt at school (which, admittedly, was a while ago) that for a singular (proper) noun ending in ‑s, the apostrophe went after the s and there was no additional s.

I don’t wish to start a flame war on which is correct, though my question doesn't really make sense if my grammar book is wrong! What I’m curious about is when the change occurred. :

So my question is when did James’s become the correct form and James’ the incorrect one?

Since, 1810, forms like James’s (which I will call type A) have generally been more commonly used than forms like James’ (type B), according to my research using the Corpus of Historical American English (COHA).

I compared a number of names ending in -s looking for possessive forms with and without a final s. Here is a graph comparing incidences of type A and type B forms: 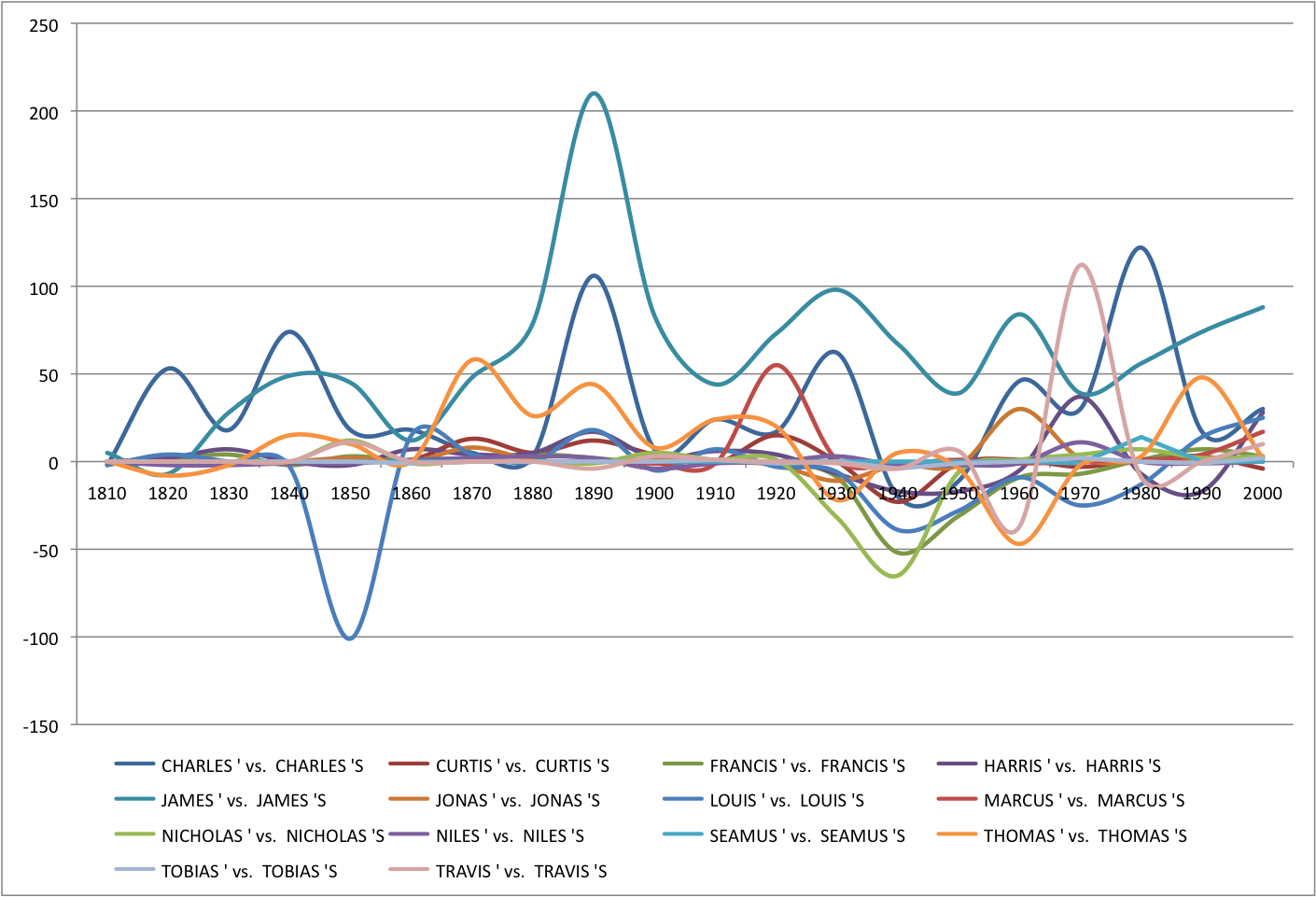 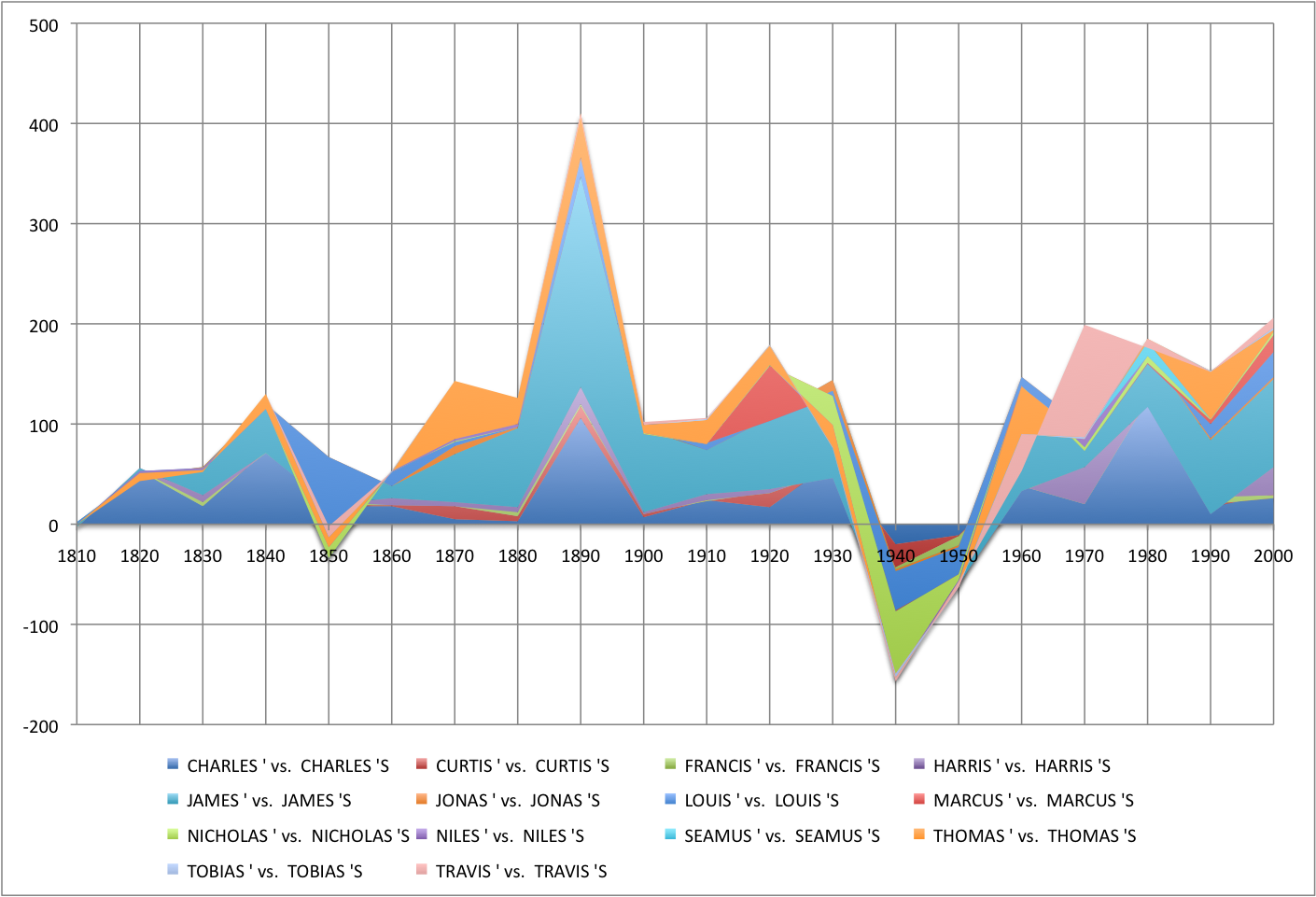 Overall, it is quite clear that type A forms (e.g. James’s) predominate, and have done so for nearly two hundred years. Nevertheless, type B forms are also quite common, and during the 1930s to the 1960s, a number of names had more incidences using type B. But since 1970, most names have had a majority of usage in type A. As for the original question’s example of James, throughout almost the entire period, excluding 1820, incidences of James’s has strongly outnumbered incidences of James’.

I can’t speak to when, but I can say that Strunk and White’s Elements of Style specifically says to use the James’s form.

Since that is taken as gospel by — who knows, hundreds, thousands, millions? — of writers, I’m sure it has an effect on modern trends.

When I was taught grammar in school in the 90s and early 2000s in the northeastern United States, I was taught James's, to differentiate it from the plural possessive. (That's James's book; that's the Bryants' car.)

My recollection from school (UK, 1980s) is that the apostrophe-only version is used for Biblical names, and the apostrophe-plus-s is used for everything else. According to this rule, you would write "Jesus' friends and Seamus's friends" because the name Jesus appears in the Bible but the name Seamus does not.

Clearly, the rules (if they can be called rules) change over time. Therefore, you will be able to see the popular Christmas carol lyric '"Sire he lives a good league hence,/By St Agnes' fountain"'. The metre does not allow for "Agnes's" in order to scan.

Here is the justification:

For all SINGULAR nouns (other than some Bible names), add the apostrophe S, regardless of the ending letter.

For PLURAL nouns that end in S, add only the aposrophe.

Really, it's quite simple.

Somewhere along the way, I recall a tip (likely designed to simplify matters rather than clarify them) that stated that single consonant names ending in S such as James would be adjusted to James's to indicated the possessive, whereas a polysyllabic name such as Oedipus would simply get the apostrophe as in Oedipus'. Perhaps this is more of an aesthetic tip, but I like it.

Not the answer you're looking for? Browse other questions tagged orthography history possessives apostrophe proper-nouns or ask your own question.

17
What is the pronunciation of the possessive words that already end in s?
9
Strunk and White says "Charles's" is correct -- is this still the case?
8
Bayes' Theorem or Bayes's Theorem? (Similarly, Charles' Law or Charles's Law?)
7
"Dawkins'" or "Dawkins's"
2
Apostrophe after Proper Noun ending with s
2
How to handle the possessive case of the name Franks
2
When a name finishes in "s" can you say Jaume Casals's biography?
0
Mars's or Mars'?
-1
Adding “’s” when the name ends with “s”?
1
Jenkins' vs Jenkins's vs Jenkins'es
See more linked questions

41
Can one explain the different distributions of the Saxon and the analytic (Norman) (periphrastic, 'of') genitive
11
When did it become incorrect to use apostrophes with possessive pronouns?
2
"The species/species'/species's survival..."
5
Are there nouns that undergo no change when used in the possessive (Saxon genitive)?
1
Quoted Possessives Ending in "s"
4
Pronunciation of the possessive form of singular nouns ending in “s”