How to spell and find razzu/razoo and its origin

With the spellings 'razu' and 'razzu' I found nothing that seemed pertinent, that is, only references to terms and names from India. With the spelling 'razoo', however, a number of slang and dialect senses appeared.

The more common slang sense, from OED Online, seems to approximate the sense your mother used, 'a charge, a sortie'.

Origin unknown.
U.S. slang.
A charge, a sortie. Hence also: a lively or boisterous outing or social occasion.
1864 Newark (Ohio) Advocate 19 Aug. 4/1 The rebs occupy the works we left, and this morning, before we had breakfast, they made a little ‘razoo’ (as the boys say) on us, causing us to get into our rifle pits double quick, but they soon withdrew.
1911 Coshocton (Ohio) Daily Tribune 16 Feb. 3/2 I'm feeling like having one more rip-roaring razoo with you for the sake of old times.
1926 Daily Kennebec Jrnl. (Augusta, Maine) 5 Oct. 3/4 At the first official ‘razoo’ last evening,..ten of the more emerald-hued freshmen were honored at a special reception given by the sophs.
1970 Amarillo (Texas) Globe-Times 22 Jan. 20/2 The bull made another razoo into the crowd of Mexicans.
2003 Charleston (W. Va.) Gaz. (Nexis) 24 Jan. 9 a, Geordie patiently pulled him out of the way, started on the puzzle again, when Neil made another razoo and gleefully scattered the pieces again.

The 1864 quote using 'razoo' in the sense of 'a charge, a sortie' is the earliest use I found.

Razoo, used as the title of a periodical published by a Saint Paul (MN) advertising agency in the early 1900s, is consistent with the slang sense given by OED Online of 'a charge, a sortie'. The periodical and its contents are considered the 'razoo'.

Some of the contents of the periodical are preserved in a book published in 1909, called simply A Book, with this foreword:

The other common slang sense is from New Zealand and Australia, where 'razoo' is used in phrases meaning, generally, that the speaker has no money.

The New Zealand and Australian slang sense is negative in that the slang is ordinarily used to say one hasn't a 'razoo', but not to say that one has such a coin.

An 1893 text, Some Peculiarities of Speech in Mississippi attests to a different sense than is attested by the quotes in the OED Online. This text also suggests the origin of the verb 'razoo' may be from 'to cut with a razor', or from 'razee' (meaning, loosely, 'to dicker or bargain down'):

(From Some Peculiarities of Speech in Mississippi, Hubert Anthony Shands Norwood Press, 1893.)

Another slang use seems to have been with the sense of 'bite', as in the 'bite' of acrid smoke: 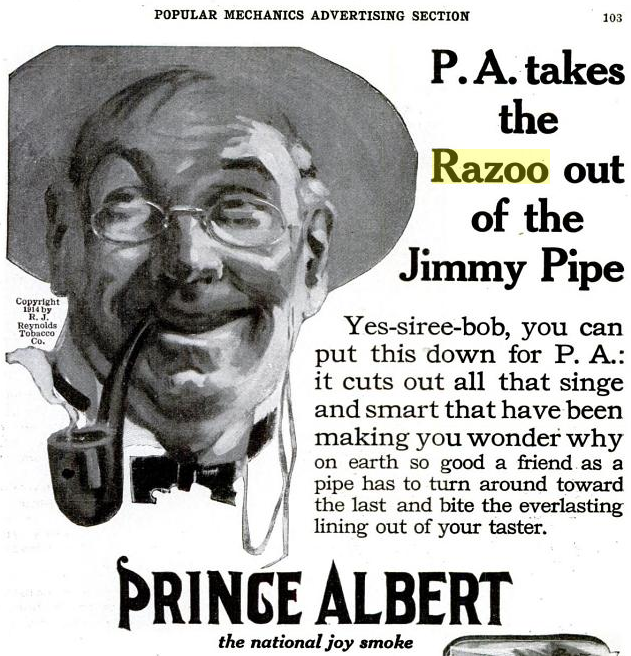 (From an ad for Prince Albert tobacco in Popular Mechanics, Nov 1914.)

'Razoo' also appears as part of several school cheers. The sense of 'razoo' in these cheers is minimal, or it is altogether nonsensical. Here is a representative one:

(From The College Year-Book and Athletic Record, 1897)

Finally, a use that seems to be in the sense of a 'hazing' or 'harassment' similar to those conferred upon new members of college fraternities, but here referring to members of the fraternity of railroad locomotive mechanics generally: 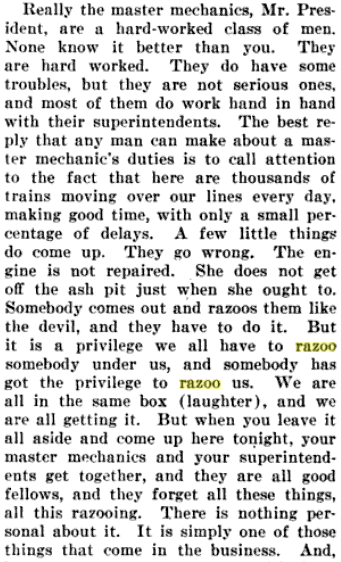 Probably coincidentally, a Portuguese phrase documented in an 1813 Portuguese-English Dictionary and meaning 'to swerve from reason' appears to use razoo in the sense of 'reason':

Razoo was only used in one game of competition we played when we were kids. It was also the closest thing to gambling we were allowed. Marbles. Everything you knocked out of the circle was yours. At the end of a normal game, everyone gathered their marbles in a gentlemanly manner and went about their business. If during a game there was a sudden interruption of any kind razoo came into play. A mother calling one of the kids playing to come home, or the recess bell ringing. Someone would call "Razoo" and it was a free-for-all gathering the last marbles in the ring. I don't know why. Many of the things I learned as a child were taken on faith. I'm not sure which one. Joe Paul

When I was a child in New Orleans ( 1946-1952) the word razoo was used in a game of marbles. It was like a scramble to get as many marbles as you could. Joe Paul's previous answer is right on. I forgot about that word until a restaurant opened in the Houston area named "Razzoo"s".

Also, there was an old man who used to walk on Constance St. and announce to the kids playing in the street that he had a pocket full of nickels. We'd all gather around until he threw them in the air. As he did this he'd shout "Razoo"!