If somebody asks me to describe the below photo, I would definitely say, "It is a picture of shirtless Putin on a horseback".

The adjective topless is defined by Oxford Online Dictionary:

(Of a woman) having the breasts uncovered: a topless dancer.

And according to Online Etymology Dictionary, topless means:

And I looked up the bold top (n.1) above in the same dictionary and it states:

Few Indo-European languages have a word so generic, which can be used of the upper part or surface of just about anything.

And nothing else to clarify the meaning. However, the headline of The Independent reads: 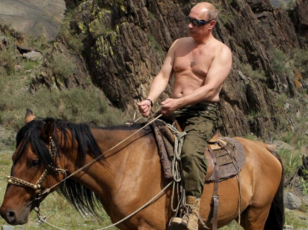 Topless was originally used for males. Shirtless is much older. The idea was to indicate that the breast was not covered. I'd use topless only to refer to women, shirtless is used mainly referring to males Ngram: