What do you call the container that looks like a ‘Pringles bottle’?

I don't need to eat that Pringles. I need the name of the bottle that contains them, i.e. which is long, doesn't need to be round, empty inside and light-weight.

What do you call such a thing in English? What should I Google if I want to find such a container? 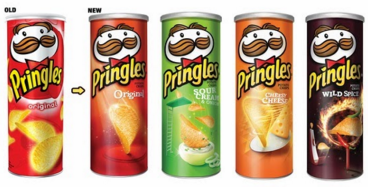 [Source of the picture]

As Sven Yargs suggests, you eat a can of Pringles, or a tube of Pringles.

Bottle is definitely not a suitable word here. A bottle is something that has a narrow opening, and would typically be used to contain fluid.

A glass or plastic container with a narrow neck, used for storing drinks or other liquids: he opened the bottle of beer

Although that particular object is most often described as a can of Pringles, I'm going to go out on a limb and argue that this shape is more often called a cylinder.

A can is generally short, may be squat, and is usually made of metal. A cylinder is long and narrow with no default construction material assumed.

If you wanted Pringles, can is the right word. If you want a generic container like the one shown, cylinder will work better. As choster mentions below, a canister is often used for a cylinder that is used for food storage.

And also, this is sometimes called a sleeve of Pringles. You can google it; here's an example from QuickMeme.

The answer to your question is "can." (Thanks Mary-Lou.)

Here are two of many answers I got when I Googled, "other uses for Pringles cans":

There are dozens of others. The use of a Pringles can as an antenna is my favorite. Have fun!

There are several options, but this is best called a canister.

A usually cylindrical storage container, especially: a. A box or can of thin metal or plastic used for holding dry foodstuffs or cooking ingredients, such as flour or sugar. -http://www.thefreedictionary.com/canister

It's a bit more descriptive than can, which is arguably correct, but which more often describes a can such as canned soup or other wet materials comes in, made of heavier material. Consider also that it's perfectly possible to ask for a "cardboard canister," while a "cardboard can" sounds like a contradiction in terms.

This is not to say you would typically ask for a "canister of Pringles," but rather if you wanted to identify the container independent of the contents, you'd be more likely to get what you wanted with "canister" than "can."

In the Uk the trade name for this packaging product is ''Little John Drum'' They come in a vast variety of sizes. I do not know the actual manufacturer's name, but that title would be a start for a web search.

In the England the following applies for container names:

In England we don't use can unless the material is metallic. So the pringles container would usually be called a tube, but could be a tub, carton, container or packet. They short ones could also be called drums.

The reason for all these variants is unimportant historical accidents. The distinction between tins and cans for example is because the English word was tin, and can is an Americanism, but canned drinks brought the word can to England, hence cans are primarily drinks tins, which brings the connotation that they usually cannot be reclosed.

In the northeastern USA we would refer to a can or stack of Pringles or, if it's a plastic container, a tub of Pringles. Other food containers which bear the same shape are canisters (cylindrical boxes with a cardboard or plastic lid like for oatmeal), jars (glass or clear palstic with a twist on lid like for jam and peanut butter),cartons (generally cardboard or waxed cardboard, rectangular with a flat or pointed top as for milk or eggs) or tubs (colored plastic with a snap on lid like for margarine or whipped cream). Cans are almost exclusively one use metal containers which, once opened, cannot be resealed. Perhaps Pringles refer to their packaging as a can because of the aluminum lining of the vacuum packed canister much like a coffee can which, once the pull top is opened can't be actually resealed but has a plastic lid for after opening.

Since a bottle is made out of glass (or plastic) a glass container or plastic canister with the shape of a can of Pringles would be called a "jar".

0
A word to discribe un/equally weighted options
7
What do you call an area enclosed by apartment complex structures? Is it a courtyard?
2
Adjective (or adverb) form of contains or container
0
name for slot that clamps a pushed-in soldered wire?
0
What is the correct term for a set of options?
1
What do you call doing someone a favor but then talking about it making her feel indebted to you?
2
What do you call a person who is the target of an advocate?
8
‘Venus fly trap’ - authoritative etymology?