I'm looking for a word to describe the 'thing' that is containing other 'things' which are being weighted against each other by some metric.

What would be a generic word to describe the Area? It's kind of like a "container" for all of the objects that are accumulating votes.

"I would like to cast a vote for this Parking Location within this Area."

I think a good example is the word district. In this case the district is the thing that contains other things (politicians), that are being weighted against each other by some metric (number of votes).

Another important detail is that a Parking Location can potentially belong to many Areas. So when you vote for a ParkingLocation, you need to specify in which Area you are voting.

If anyone has some other options that are similar I would be open to those.

Is precinct the word you're after?

precinct: any one of the sections that a town or city is divided into when people vote in an election M-W

: a division of a city or town, especially an electoral district, for administrative and representative purposes. AHD

In politics the list of candidates is called a ballot. It fit's because it contains things that are being voted on. It also jives with the concept of areas since different areas have different ballots for their districts.

If it is meant to including the results try the word tally. It's the traditional word for the vote count.

Developers rip off words from other fields all the time. We call it leveraging a metaphor to make ourselves feel better when we tell people absurd things like: these little clickable pictures are a desktop.

A collection of things that are counted can be arguably described as a histogram:

: a representation of a frequency distribution by means of rectangles whose widths represent class intervals and whose areas are proportional to the corresponding frequencies
Merriam-Webster

Assuming each element in your collection represents a single class, then each "rectangle" would be of equal width.

To construct a histogram, the first step is to "bin" the range of values—that is, divide the entire range of values into a series of intervals—and then count how many values fall into each interval. The bins are usually specified as consecutive, non-overlapping intervals of a variable. The bins (intervals) must be adjacent, and are usually equal size.
Wikipedia

A histogram usually refers to graphical representation, but the tabular representation is also referred to as such. Below are illustrations from the Wikipedia article quoted above: 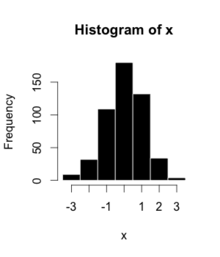 I believe the graph left off the bin representing 3.5.

13
A generic noun for something being compared?
1
Word for “buying more expensive items to go with the expensive item you actually want”
1
What's the word in English for something that increases/decreases?
2
Adjective (or adverb) form of contains or container
1
Single word for “the act of passing possession and linear position to”
25
What is the best word or phrase for expressing that 2 skills are unrelated to each other?
0
Word for “proportional government based on map area”?