What's the etymology of “Blue dollar”?

In the context of currency exchange in Argentina, what's the etymology of "Blue dollar" exchange rates?

The US dollar isn't blue (it's green) and apart from "blue movies", I haven't heard of "blue" being used to mean illicit - usually it's black, or grey for less illicit.

Translation: According to some newspapers , the adjective "blue" is because transactions done with these bank notes are done on the black market to skirt the regulations established by the AFIP and, in English, blue color is also used to talk about something dark.

It refers to an informal, parallel or black market (informal, paralelo o mercado negro) where people may exchange pesos for dollars.

I think the term blue may come from the national flag colour to refer to "argentinian dollars", exchanged outside the official currency market at a rate accepted only in Argentina.

The national flag of Argentina is a triband, composed of three equally wide horizontal bands coloured light blue, and white: 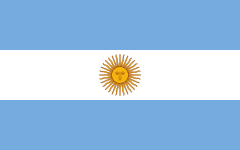 Another assumption is that it derives from blue money from to blue, a slang expression that means to blow money:

5
What does “guinea” mean here?
18
What's the origin of “[X number of] souls onboard”?
8
Why do we call some full moons “blue” when they're not?
2
What is 'less' about 'unless'?
2
Safe as Houses - Popular consideration of this phrase's etymology
1
What's-his-chops? - Etymology
11
origin of “Liar, liar, Pants on fire”
5
Etymology/history of “dib-dob” as military slang for foreign currency